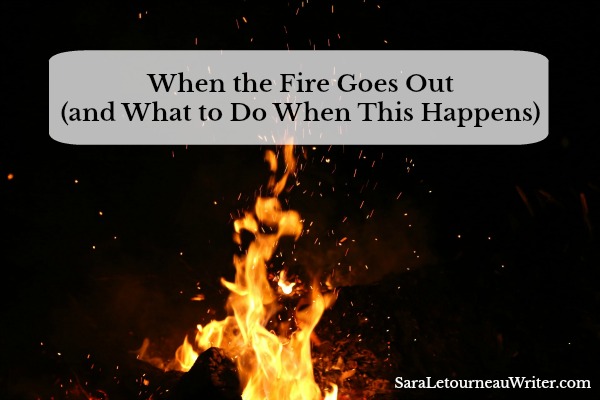 I haven’t touched my novel-in-progress since the second week of July.

Yeah. There’s no way of sugarcoating the truth. The good news is, I haven’t stopped writing altogether. But the first draft of the manuscript I’ve been working on for the past year? The desire to open the Word file isn’t there right now. In fact, I think it had been gone for a while, but it took me several weeks to realize it.

Maybe this has happened to you. At some point during a writing project, despite the passion you felt early on, the fire goes out. You might not know the reason why right away. You might not even recognize what the feeling is at first, so you keep pushing on. But once you do… well, depending on your personality, you might have a hard time accepting it.

Today, I’m here to tell you something important: It’s OK. You’re not alone in this, and maybe something in this post might help you get through it and figure out what to do next.

Why I’m Taking a Break from My Novel-In-Progress, and How I Reached That Decision

Back in May, I took 2 weeks off from the first draft of a YA magical realism novel titled Storm. The time off was partly planned (I went on vacation, including a weekend at the Massachusetts Poetry Festival) and partly unplanned (because, well, life happened). So I wasn’t surprised that once I resumed working on Storm, I struggled to get my head back into the story. I couldn’t visualize the characters or scene locations as clearly as I used to, or put myself in the protagonist’s shoes as easily as I has before.

I told myself not to worry. That as long as I kept up my writing routine, the clear vision I’d had of Storm would come back. So day after day, I showed up for each writing session, then fought to bring the rest of me to the table. It’s not that I wasn’t writing, because I was putting words on the page. But my ability to “see” the story still hadn’t returned, so all the new words felt… directionless. As if the new words didn’t equate to progress. It also didn’t help that every session ended with me feeling weary and frustrated, or that whenever friends asked me how Storm was coming along, I had to force myself to sound excited about it.

Finally, one July afternoon as I was driving home from work, I asked myself, “Do you want to work on Storm tonight?”

The answer: No. Let’s work on poetry, or a different writing project.

That’s when I realized I had lost just not the vision for Storm, but also the passion for it. And if you’re a writer or other kind of creative person, you know how difficult it is to stick with a project when you’re neither seeing nor feeling it anymore.

The Symptoms of Losing Passion for a Writing Project

The strange thing is, it’s easy to mistake the loss of motivation for a work-in-progress (WIP) with other, equally discouraging feelings. For a while I thought I was experiencing a bout of “writer’s doubt,” until I considered the symptoms I was experiencing. Here are some of the signs that indicate the fire may have gone out for your WIP:

It’s easy to fall into negative thought patterns and unproductive behaviors when the spark for a writing project flares out. So what can you do to move on with more compassion for yourself and renewed faith in your writing? Maybe these tips, which I’ve split into two categories, can help.

#1: Accept the loss of inspiration. Take a moment to understand what you’re feeling and the source of that emotion. You might not want to admit that you’re no longer compelled to work on your WIP, but it won’t do you any good to ignore the feeling, either.

#2: Avoid being hard on yourself. For me, the worst part came after I realized I’d lost the passion for my story. I beat myself up about it for 2 weeks, dwelling on all kinds of self-defeating questions: “Why don’t I feel like working on it? Am I a quitter? Should I even be writing?” If you also take this route when things don’t go as planned, please avoid guilt-tripping yourself in this way. Battering your self-esteem will only make you feel worse. Instead, be gentle with yourself, and know that it’s OK to feel the way you do.

#3: Release your feelings. It’s understandable if you’re upset about this situation, but it’s not healthy to linger in that feeling. Letting go of guilt, disappointment, and other negative emotions can help you make sense of what’s happened and move on. Journaling allowed me to throw everything I was thinking and feeling onto the page; and afterward, I felt calmer, clear-headed, and lighter. However you choose to release –whether it’s journaling or something else – let it be a method that works for you.

#4: Understand that every writer hits potholes. You’ll run into all kinds of obstacles and setbacks as you work toward your goals. So do other writers, including successful ones. NYT bestselling fantasy author V.E. Schwab openly shares her highs and lows with writing on her Twitter page. So as difficult as some moments may be, it’s important to remember that you are never, ever alone.

#5: Take stock of why you’re writing. Sometimes it’s worthwhile to remind yourself why you’re doing this in the first place. This DIY MFA article by Leanne Sowul shares six ways of determine whether you’re writing for the long haul. Her insights prompted me to reflect on my reasons for continuing to write through the ups and downs, as well as on the goals I’ve reached and successes I’ve had so far.

#6: Give yourself time to recover. You may be tempted to jump into a new project to fill the void. But in reality, you might need more time before starting something new. Take this break as an opportunity to rest your mind and consider your next steps.

#7: Talk to people you trust. Writing is an act of isolation. Losing steam or hitting other obstacles in your craft can therefore make you feel even more alone. So, as frightening as it sounds, it’s a good idea to reach out to friends who share your creative interests and whose advice you trust. Once I left the guilt-trip stage, I opened up to other writers and supportive friends about what happened with Storm. No one criticized me. Instead, they offered feedback on how to move forward and encouraged me to be patient with myself.

#8: Switch to a different type of writing that inspires you. If you dabble in other forms of writing like poetry, essays, or short stories, shifting your focus to any of these shorter projects can allow you to continue nurturing your craft while letting the long-fiction side of you heal. This is why I’m so grateful for poetry at the moment. Despite losing motivation for Storm, I’ve still had plenty of drive to work on poems, submit them to journals, and read them at open mic nights.

#9: Stimulate your creativity in other ways. Do you enjoy painting? Drawing? Playing an instrument? Composing music? Engaging in these or other creative activities can be a fun and therapeutic way of getting you through this period. Plus, you’ll still be producing something – and that’s always an accomplishment to be proud of.

#10: Keep any previous projects in your “trunk.” There’s always the chance that your passion for the WIP may rekindle in the future. So don’t throw out your notes or delete any files for those “trunked” projects. Instead, put them aside for the day you feel ready and inspired to pick them up again.

Additional Reading to Get Writers Through the Tough Times

Whether you’ve lost the passion for your WIP or experienced a different setback in your writing, these blog posts are much-needed reminders for us to practice perseverance as well as kindness to ourselves during such times. Oddly enough, all of these articles crossed my path during that 2-week period I mentioned in Tip #2, when I needed their messages most. Funny how that works sometimes, huh?

Have you ever lost the vision or passion for a writing project? What was your experience in managing your reaction or emotions and moving on to something new? Did the passion for that story eventually come back? What other advice or insights would you like to share?