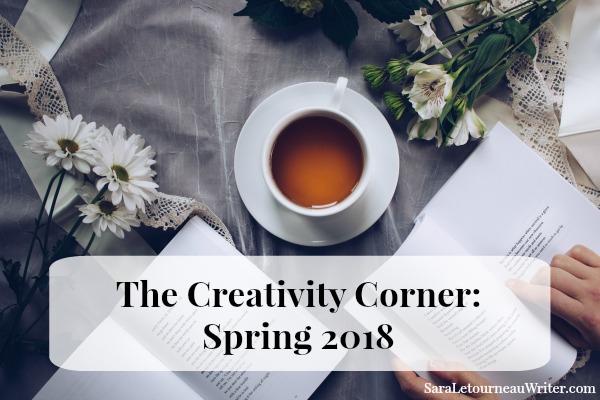 I’m having a hard time finding the right word to describe this past spring. “Rollercoaster” would be… appropriate, but exaggerated? April was turbulent in terms of stress and emotions, and the beginning of May was busy mostly because of vacation. But for the most part, May and June were much calmer. And regardless of what was going on, I continued making progress on different creative projects… except for one.

Yeah. Unfortunately I lost some momentum (and confidence) with Draft #1 of my new manuscript. But I shouldn’t focus so much on the one hiccup, because the highlights (including a certain cookbook that is now out in the world!!) were fantastic. In fact, let’s kick off this post with… 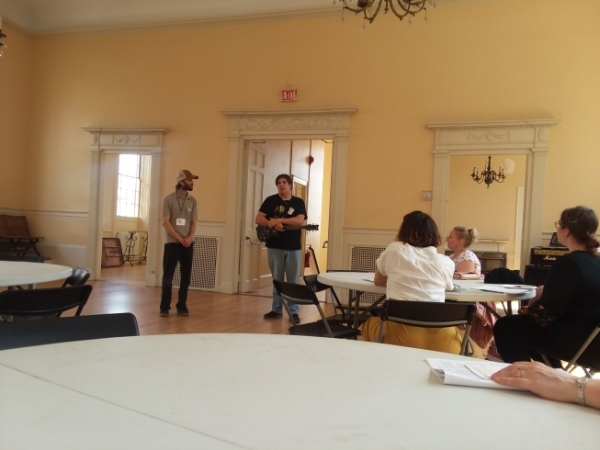 The editors of Golden Walkman, during their workshop at the 2018 Massachusetts Poetry Festival. Photo taken by me.

This was the big literary event on my calendar this year, and it was INCREDIBLE! For three days I attended poetry readings, panel discussions, and workshops; and connected with other poets as well as editors of literary journals and poetry presses. And with beautiful weather, scrumptious food, and centuries of history around every corner, it was fantastic as a long-weekend get-away, too. If you’re interested, you can check out this write-up for the touristy side of my trip, including more photos and some restaurant recommendations.

So what were some of the highlights at the Mass Poetry Fest for me? It’s tough to narrow it down to just a few, but they were:

Thanks to the Mass Poetry Festival, I came home inspired and motivated to work on my own poems. In fact, I should have brought a second suitcase with me, just to carry ALL THE IDEAS I brought back with me. It’s amazing how an event like that can open your eyes and mind to new ways of seeing the world (or to things you may have missed before) and remind you of other thoughts or feelings you’ve been meaning to share.

So at the moment, one batch of poems is out on submission (*fingers crossed*), several more poems are at different stages of revision, and others are waiting to be written. (So many poems, not enough time – but that’s not the worst problem to have, right?) I purposely took a break from submissions over the spring to nurture as many of these “newborns” as I could, and it’s been quite satisfying. Once I have more ready to go, I’ll send out more batches. And then write, revise, and submit, again and again and again…

Oh, and what about the poem that was accepted back in March? Don’t worry – you haven’t missed it. 😉 I’ll share the link as soon as it’s available!

On the opposite “extreme,” my feelings about my progress on Storm have seesawing. Draft #1’s word count is now up to a whopping 109K (WHAT ON EARTH?!?!), and the end is… not exactly in sight yet. It also didn’t help that, over a 2-week period, I was so busy with the poetry festival, the rest of my vacation, and other things that I only worked on Storm for maybe 2 hours. Not to mention that, during that same time, I hit a wall with figuring out scenes that would connect the first half of the book with the last quarter. (Some days I love being a “plotser” who writes nonlinearly, and other days…. *sighs*)

So… yeah. But I’m moving forward now and filling in the gaps between those previously written scenes… and watching that word count grow with a mounting sense of dread. I know I should focus on finishing Draft #1 and not even think about all the cutting I’m going to have to do during Draft #2. Still, I’m concerned that my habit of overwriting isn’t the only reason why this manuscript is waaaayyy too long.

It’s also why I’m wondering whether to change the POV style in Draft #2. Up to this point, I’ve written Storm in third person (she, her, hers). Part of me was hesitant to do first person (I, me, my, mine) because, since the protagonist suffers from a form of anxiety, I was afraid it would make the experience too emotionally intense for readers. But it recently occurred to me that… well, maybe the story needs that intensity. Plus, maybe with first person, I’d be less apt to overexplain things or be so detailed. That makes sense, right? Or maybe I’m being obsessive again…

Anyway, I hope to finish Draft #1 by summer’s end. And I really hope it’s not as long as TKC’s 133k first draft. (*sigh*) Where is the light at the end of the tunnel when you need it?

IT’S SELFIE TIME! Me with “A Literary Tea Party.”

Remember the cookbook that Alison Walsh of Wonderland Recipes asked me to write an introduction for? It’s been published!! A Literary Tea Party came out on June 5th, and it’s thrilling and surreal to have my own copy. And as proud as I am to have contributed to the finished product and to see my name on the cover, I’m ECSTATIC for Alison. This is her book baby, after all, and she put her heart and soul into crafting the overall theme, selecting and fine-tuning her recipes, and (if I’m not mistaken) taking the beautiful photos. Anyone who purchases A Literary Tea Party is truly in for a treat.

If you missed it earlier this month, check out Alison’s guest post on how to plan a tea party. And for any podcast fans, check out her interview on the latest edition of DIY MFA Radio here.

What I’ve Been Listening to While Writing

Since I’m still working on Storm, I’ve continued adding songs to its playlist. Here are some of the musical “helping hands” for the most recent scenes I’ve worked on:

What I’ve Been Reading

I read 14 fiction books over the spring, which brings my 2018 total to 28 books. So far I’ve stuck to my plan to alternate between brand new books, “market research” reads for Storm, and my existing TBR pile, and it’s working out really well. Funny thing is, I’ve only read five books that came out this year. So I’ve caught up quite a bit on 2017 “holdovers” – and I’ve finally made a dent in my TBR pile! (*lol*)

Anyway, here are my favorite reads from over the spring: 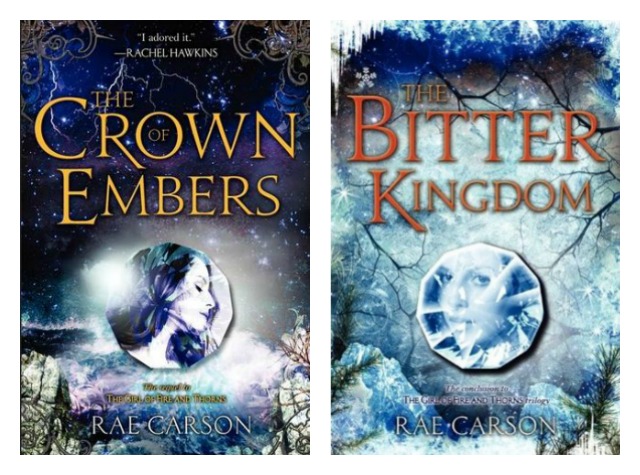 Two other reading highlights of the spring were The Crown of Embers and The Bitter Kingdom by Rae Carson. They’re the second and third novels in Carson’s Fire and Thorns Trilogy, which is now one of my favorite YA fantasy series ever. If you like immersive world-building, Spanish-influenced cultures, unique settings not normally seen in YA fantasy, and vulnerable yet emotionally strong heroines, then put this series higher on your list of reading priorities. 😉

My Writing and Reading Plans for the Summer

Normally I don’t include goals for the coming season. But this time it feels appropriate, since one project may be nearing the end of a very important stage. So when the next Creativity Corner posts in late September, I hope I’ll have accomplished the following:

How are your writing / creative projects coming along? What are your plans for them over the summer? What do you do when you hit a rough patch (delays, lapse in confidence, etc.) in your work? What books have you read recently? Any good music on repeat?