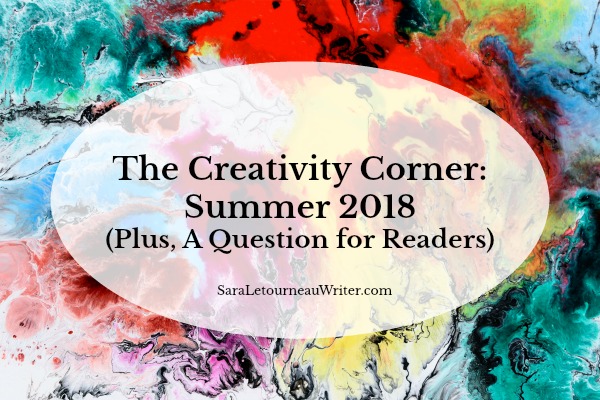 So… in terms of writing, this summer turned out much differently than I’d expected it to. If you read last week’s post on losing the passion for a writing project, then you know part of the story. (More on that shortly.) Yet it wasn’t an unproductive or disappointing season. In fact, some good things happened, like continued excitement about A Literary Tea Party, the cookbook I recently wrote an introduction for. And who knows, there may be more news to share in the future. 😉

I know, I’m being a tease. But one thing that’s clear? The second part of the blog post title. I might be making some changes to this series, and I’d appreciate any input that you, the reader, may have.

Let’s dive in so I can explain things in more detail.

As I mentioned in the end-of-spring Creativity Corner, one of my summer goals was to finish the first draft of Storm, a YA magical realism novel that follows a girl who suffers from anxiety / panic disorder through her first year of college. And… well, that didn’t happen.

Unfortunately, after writing almost 115,000 words, I’m taking a break from Storm. Without repeating too much of last week’s post: I lost the “vision” for the story back in May, after inadvertently taking a two-week break from it. I kept working on it, though, with the hope that eventually I’d “become” the protagonist again and see the other characters, the scene locations, and everything else as clearly as I had before. But after two months, that didn’t happen. And not only did the story seem like it was going nowhere, but I also felt burnt out. My motivation was gone… and it hasn’t come back yet.

There might be a plotting issue with Storm, too. Or, rather, an issue that developed because, unlike my previous manuscript, I didn’t plot it. Instead, when I began working on Storm last year, I plunged into it, probably because of the anxiety I was experiencing at the time. It felt good then – cathartic, even. But one major problem I now see as a result of that approach? I threw every good idea that came to me, from magical realism elements to subplots and supporting characters, into the story. And based on the number of scenes I imagined were left to write, I had maybe another 50 to 60K left to write. 😮

I’d like to think that if I still had the vision and passion for Storm, I’d still be working on it, with the plan to make some hefty revisions and LOTS of cuts in later drafts. And I wouldn’t rule out returning to that story in the future, either… but not until two those crucial ingredients come back to me.

Apart from that, poetry became my main focus once I went on break from Storm. And WOW, it’s been on a roll! More new pieces were drafted, more older poems were revised, and more submissions were sent to literary journals. In fact, I doubled the number of submissions I’d set as my goal in the end-of-spring Creativity Corner (four, instead of two); and I already have a list of publications I’d like to submit to for the rest of 2018, based on their deadlines or new submission windows.

So, have I heard from any of the journals I submitted to over the summer? Well… let’s just say that I’ll have more good news to share with you in the weeks to come. 😉 And no, I still haven’t forgotten to share the poem I got the “yes” on earlier this year. I promise to share the link as soon as it’s available!

I’m not sure yet, to be honest. A few ideas (all fantasy or speculative in genre) have been floating around in my head, and they’re all limited enough in scope that they would work best as shorter works instead of novels. One is actually an offshoot of a subplot from Storm, and I have a loose outline for it in the works. But I want to have a clearer picture of the protagonist before I dig into the actual writing.

I’m also dabbling in a world-building project, with a fictional setting inspired by the geography, geology, and climate of one of my favorite places in the world: Iceland. (*big smiles*) It will be different than the world of the YA novel I was working on before, especially in terms of people and culture. And, of course, there will be fantastical elements. But right now I’m focusing solely on how the land itself “functions” by researching how tectonic plates, volcanic systems, and glaciers have shaped that island and continue to affect it today. As N.K. Jemisin once said, “Build your world from the ground up – literally.” I’m truly taking that advice to heart, and I’m planning to take my time to get this world right.

Of course, if I’m building a world that’s inspired by Iceland’s nature, I guess I should plan on going back there soon, huh? 😉

A Literary Tea Party was published in June, and as the “introduction author” I didn’t know what to expect once it was out. But it’s been a lot of fun! I’ve heard from a number of people who bought the cookbook, and they’ve had nothing but praise for not only my contribution, but the book as a whole. Then again, it’s gorgeous “in the flesh.” Alison and her publisher did an incredible job with the overall presentation. I’m just happy I could be a part of the project. 🙂

So what kinds of excitement have I experienced with A Literary Tea Party? Here’s a quick list, with a few photos in the slideshow above.

Hey! Where’s the “What I’ve Been Reading” Section??

I enjoyed so many of the books I read this summer that it was too difficult to narrow it down to five highlights. So, check back next week to learn about my favorite Summer 2018 reads in a separate post. I’m also considering making this separation permanent. That way, I can talk about all the books I enjoyed over the past season instead of just a small handful of them.

Which leads to my other question…

The Future of The Creativity Corner

As much as I enjoy letting readers know what I’m working on, I also realize these posts don’t draw as much traffic as other posts do. So, would you mind if this is the final Creativity Corner post? What if, instead, I included a brief writing update in another regular series? Maybe at the end of the bimonthly What’s Making Me Happy posts?

Obviously I’ll continue working on my projects no matter what. And if I have news to share (poems being published, stories finished, etc.), I’ll let you know in their own posts. But I also want to be sure I’m putting my energy into blog posts that readers will want to check out. So whatever your thoughts might be on this, feel free to share them in your comments on this post.

How is your writing going? Have you ever lost the passion or vision for one project, yet found it strong and alive with another? Also, let me know what you think regarding the future of The Creativity Corner as a series.

28 thoughts on “The Creativity Corner: Summer 2018 (Plus, A Question for Readers)”