For many people, spring is an ideal time to catch up on cleaning (hence the term “spring cleaning”). In my case, I don’t necessarily catch up on cleaning and household chores, since I do both year-round (and, well, when I feel like it…). Rather, I’m bitten by a desire to “lighten the load,” better known as the decluttering and organizing bug.

This year, that bug struck big-time. By that, I mean that I’m still getting rid of what I no longer want or need, even though summer is near. And as a result, this extended spring-cleaning has made me consider my personal habits and what it means to feel “lighter.” It might sound like a strange topic to wax philosophical about, but when the decluttering bug sticks around as long as this one has and leaves you refreshed in the process, it really gives you a lot to think about.

Confessions of a Recovering Pack Rat

Let me begin with a confession: I’m a pack rat. In other words, I have a bad habit of accumulating stuff and then hanging on to it for longer than I should. Or, worse, accumulating more when I shouldn’t. Having more books than room on my bookshelves, more clothes than closet space, enough tea that some will likely go stale before I finish them – these are some of the problems I’ve created for myself over the years. Some are under better control now. Others are works-in-progress, more or less.

The worst example of them all happened in April. I was about to put some bill-related paperwork in the two-drawer, wooden lateral file cabinet in my living room. As I opened the bottom drawer , it made a louder-than-usual rubbing sound underneath, and resisted. Minutes later, once I had removed the hanging file folders (many of which were overstuffed with 5+ years of paid bills, receipts, user’s manuals, statements, etc.), I discovered what was causing the noise and friction.

The drawer’s veneer bottom, which isn’t as strong as real wood, had collapsed in the back. Luckily, nothing had slipped through and fallen under the cabinet, but from what I could tell, the drawer was broken. I could have avoided the problem had I remembered to get rid of many of those documents I’d filed away. But I hadn’t, and I knew my pack-rat habit (and a degree of laziness) was to blame.

How much did the drawer’s bottom buckle? See for yourself…

This hasn’t been the first spring of organizing or decluttering projects, though. Last year I tackled two big purges. First, I went through my closet and bureau drawers and donated clothes I no longer wore to local churches. Then I dug through my CD collection (a massive one, thanks to 5 years as a freelance music journalist) and threw out ones that were broken or that I’d lost interest in. And let’s not discount the “ongoing projects,” like donating books to my local library every few months and  letting my tea stash dwindle until it absolutely needs restocking.

But why do the biggest projects happen in the spring? I’m not sure. Maybe it’s because spring is a season of rebirth and renewal. It’s fresh, colorful, and bright, and maybe my subconscious craves those qualities indoors as well as outside.

But I don’t purposely save my organization projects for this season, either. So maybe its recurrence is a coincidence. Or, maybe after a winter of “hibernation,” when I’m worn out from the end-of-year holidays and want to relax indoors as the cold and snow take hold outside, I get restless. I spend enough time inside that I realize what I have too much of in my home; and come vernal equinox, I grow sick enough of that “too much” and decide that enough is enough.

Now that I think about it, I wouldn’t be surprised if it’s the latter. 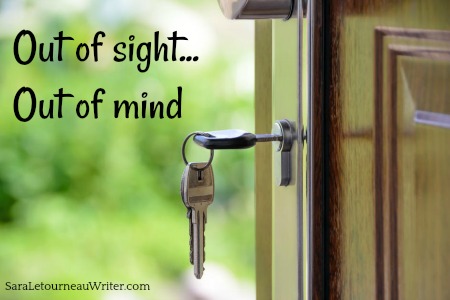 Just In Case It’s “Out of Sight, Out of Mind”

What’s funny is that I’ve always thought of myself as simplistic and not materialistic. I don’t feel the need to have the latest gadgets or technology. I don’t care to stay on top of fashion or beauty trends. My two most “extravagant” possessions are my car (a 2008 Ford Fusion I paid off years ago) and my 800 sq ft condo. In other words, I try not to own or buy in excess because I’m limited on space and budget, and… well, I don’t need a lot to make myself happy. A cup of tea and a good novel, a journal and pen, a mandala coloring book and colored pencils, a conversation with close friends – that’s all I need to put a smile on my face.

Where, then, does that packrat tendency come from?

Part of it might be a learned habit from my family. Even when I was little, I was taught to value the sentimentality and potential usefulness of things. “Hang onto [insert item], you never know when you might need it” was advice I heard frequently then. And there’s nothing wrong with that advice. Those old-fashioned board games could entertain your guests next week. That faded set of bath linens could protect your floors the next time you move. Or the fire ladder under your bed… OK, that’s a bit drastic. But the point is, some things are worth hanging onto, just in case.

The other part of it, however, might be the idea of “out of sight, out of mind.” If I put something in a closet, bureau, or anywhere where it won’t be seen once the door or drawer is shut, I forget about it. Plus, the frequently used excuse that I’m “too busy to take care of that right now,” along with the desire to focus on creative writing when I’m home, doesn’t help. That recipe of forgetfulness, the off-and-on willingness to let responsibility slide, and trying to keep pace with the speed of life… Maybe it’s no wonder I let things accumulate over time.

The Good Fortune of Having a Handyman Father, and the Surprise “Happy Ending” He Fashioned

That realization flashed through my head when I discovered the “broken” filing cabinet drawer. I had ignored the growing weight of the hanging folders for so long that they created a more serious problem, one that eventually wrecked the drawer they sat in. And since I’m not good with tools, and the one handyman I know (my retired father) now lives 1 1/2 hours away, the only option I thought of then was, “I better get a new filing cabinet.”

So I went ahead with that plan. I ordered a new filing cabinet that was similar to the old one, and arranged to have it dropped off at my parents’ house so that, on a night that was convenient for them, they could bring it to my place and help me assemble it. I also combed through my folders, kept any documents that were still necessary, and began the slow process of shredding a few pages each night from the  sizable “not-needed” pile. I even cleaned out the cabinet’s top drawer, decided which office supplies I’d keep, and threw out the rest.

But here’s what I had forgotten: If you give my father something that’s broken, damaged, or not working properly, he’ll find a way to fix it.

I didn’t need a new filing cabinet in the end. Instead, my dad was able to remove the old cabinet’s “broken” drawer, reshape the collapsed bottom, and “popped” it back into place. No more apparent warping, no more rubbing or resistance on the bottom; the drawer moved in and out effortlessly, as if nothing had ever happened.

I felt like the luckiest adult daughter in the world that evening. In fact, I was so thrilled and grateful for my father’s help – and so ready to get two boxes’ worth of hanging folders out of my bedroom – that I put the folders back into their proper place that evening.

The Relief of Having “Lightened the Load”

There really is some truth to the idea of “lightening the load.” Sure, it’s easy to ignore the unwanted and wanted items piling up throughout one’s home. But after a while, it becomes overwhelming, physically and emotionally. Taking the time and effort to remove that which we no longer need is therefore good not only for one’s living space and furniture, but also for the soul. At first we might feel a void or sense of loss. But if our act of purging is both thorough and careful, and if we don’t regret getting rid of those items afterward, it can lift a literal weight from our shoulders.

No wonder I felt like how the repaired drawer moved that night. With one smooth motion, I breathed more easily. I had finally gotten rid of the documents I didn’t need anymore. The drawer’s warped bottom may have forced the issue, but in hindsight I’m grateful it did. If it hadn’t, who knows how much longer I would have let those folders sit? Or how much worse the drawer problem might have become?

I was also equally thankful that the drawer was fixed, and that my father was able to figure that out. It saved me money (once I returned the new, unassembled filing cabinet); and it taught me to ask for help before assuming something must be replaced, and that Dad is always willing to lend a hand, regardless of the 90-minute drive separating us.

I have two more decluttering projects to tackle now. The storage tote in my bedroom is swollen with issues of Writer’s Digest, Poets & Writers, and other writing-related magazines I’ve collected. (So far, the oldest magazine dates back to 2013.) Both of my nightstand’s shelves are also full, with half-used journals and years of birthday and holiday cards I’ve kept (once again) for sentimental reasons.

But I’m not delaying these projects for next spring. Instead, I’ll start chipping away at them over the summer. I want to keep both pieces of furniture for as long as I can. And, now that the feeling is fresh in my mind, I know the desire to experience that lightness of consciously choosing to have less will motivate me to finish those projects sooner rather than later.

Do you have a habit of accumulating things over time? Or postponing organization or decluttering projects at home? If so, what typically motivates you to finally start them, and how do you feel once they’re done? Do you have your own stories of “lightening the load”?

15 thoughts on “Lightening the Load: The Relief of Springtime Decluttering Projects”