I’d never describe myself as a fast reader, since I know plenty of people who read more books per year than I do. But as of the end of April, I’ve already read 18 books so far in 2016. That means I’m on track to read at least 50 books this year, topping last year’s total of 43. Nice!

As for April itself, it was a pretty good month for reading. I wrote reviews for four of the five books I read – and I may have found a strong contender for Favorite New Book of 2016. 😉 Let’s jump to that one first!

Read of the Month: The Immortals by Jordanna Max Brodsky

Greek mythology meets NYC murder mystery in The Immortals, the first book in Jordanna Max Brodsky’s Olympus Bound series. Selene DiSilva, who was once the goddess Artemis, works and lives in Manhattan as a private investigator in crimes against women. One night, she finds the body of a young woman, grossly mutilated and crowned with laurel – all indicators of an ancient cult ritual. Enraged, Selene vows to bring the killer to justice and finds an unlikely associate in the victim’s former colleague, classics professor Theo Schultz. But as the rituals continue and grow more horrifying, Selene and Theo discovery they might be in over their heads – and the outcome of the killings could spell disaster for them both.

The Immortals was another book I’d heard through the “SF&F book blog grapevine,” and I’m thrilled I paid attention to the buzz it’s received. It’s a fantastic balance of action and academia that’s smartly paced, lightly romantic, and unexpectedly funny at times. The world-building focuses on how Greek gods and goddesses function in today’s world; and Brodsky’s reimaginings were fascinating, layered, and accurately rendered. Sometimes the level of scholarly detail bogs things down, but the story and writing quickly engrosses you again.

But what do I love most about The Immortals? The characters! My favorites are the two protagonists: Selene for her overall arc, the choices she makes, and her general bad-assery; and Theo for his delightful mix of integrity, scholarly pretentiousness, and witty charm. (Hermes and Dionysus are also given HILARIOUS modern-day portrayals!) Combine this with all of the pluses mentioned earlier – and, well, maybe it’s no surprise that I read the last 150 or so pages in one sitting. This is one of those rare stories that engages the intellect as well as the heart and pulse. Now I can’t wait for next year’s sequel Winter of the Gods!

Other Books I Read in April

Set in Great Britain in the year 1800, Winterwood overflows with fantasy from the get-go. Rossalinde Tremayne, a witch who’s “assumed” the identity of her dead husband and privateer captain Will, returns home for a bitter visit with her dying mother. There, Ross meets a half-brother she never knew about and inherits a magical winterwood box – a box that only she can open and, by doing so, free the nature-born rowankind from slavery. But the British government wants the box as well, and the ghost of Ross’s beloved Will begs her to forsake her quest. Nevertheless, Ross is soon running for her life, searching for answers about the box and her family’s origins while finding herself caught in the affairs of shapeshifters and the enigmatic Fae. In the end, what is Ross willing to sacrifice so she can right an ancient wrong?

There’s no denying that Winterwood has an awesome premise. A high-action plot combining high-seas pirating adventure with a slew of supernatural elements and creatures – how could a fantasy reader not want to read it? The amount of secrets and revelations unearthed in each chapter also kept me in suspense. Unfortunately, that excitement didn’t compensate for the issues I had. While I liked some of the supporting characters (especially the wolf-shapeshifter Corwen and Ross’s half-brother David), I never connected with Ross. She felt too distant and underdeveloped for a protagonist. The dry, disengaging writing style wasn’t to my taste, either. It ushered the plot along at a breathless pace but never really brought the characters to life.

All in all, Winterwood was entertaining, with solid world-building and the potential to be an amazing story, but little more than that. Other readers enjoyed this book more than I did, though, so maybe it wasn’t meant for me. 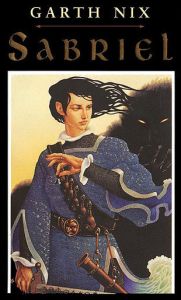 Sabriel isn’t just the Abhorsen’s daughter. She’s next in line to inherit his role as the Old Kingdom’s necromancer, ensuring passed-on souls rest forever in Death. When the Abhorsen goes missing, Sabriel leaves her boarding school and returns to the Old Kingdom to save him. But an ancient, terrifying evil is regaining its powers, and its allies are keen on seeing it return – and keeping Sabriel from her mission.  How can Sabriel rescue her father – if he’s still alive – and find a way to send the darkest and most dangerous of all spirits back into Death?

Sabriel is a wonderful example of a YA fantasy with its own personality, one that’s not shaped by overused tropes or forced romance. (FYI: There are hints of romance in Sabriel, but not many.) It also puts a noble spin on necromancy. Instead of raising the dead, Sabriel and the Abhorsen usher them into eternal sleep and protect the living from them. The world-building is carefully and gradually unearthed, including the realm of Death and an Abhorsen’s responsibilities. As for characters, I adore Sabriel so much that it hurts! She’s so smart, selfless, and sweet; and the burden she bears is such a weight, yet she never shies away from it. I also like the prince / guardian Touchstone for his integrity and dedication to Sabriel. And Mogget – what a clever twist on the talking-cat trope!

My only critiques on Sabriel are on the writing. At times it’s very exposition-heavy, though I understand why. (Sabriel spends a good portion of the story alone.) Also, once Touchstone arrived, I wasn’t thrilled with the “head-hopping” between him and Sabriel during single scenes. The engaging characters and vibrant, original world-building truly help Sabriel shine, though; and when the pulse-pounding climax begins, you will NOT want to put this book down. If you don’t mind YA fantasies that break the mold or your heart, then Sabriel belongs on your bookshelf. 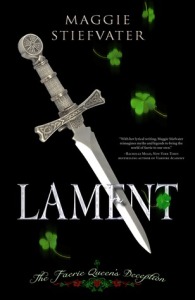 Dierdre Monaghan is a gifted young harpist. And as she learns during the summertime events of Lament, she’s a cloverhand, one who can see faeries. It all begins when the equally musically inclined Luke Dillon begins pursuing her. Despite his good looks and charming nature, there’s something mysterious – and perhaps dangerous – about him. Then, strange things start happening to Diedre’s family and her best friend James. Even worse, a vicious faerie named Aodhan is after her, and only Luke seems capable of stopping him. Can Dierdre escape the pull of the faerie world? Or will she have to confront the Faerie Queen who wants her dead?

In some ways, I was torn by Lament because of the type of YA fantasy it is. I’ve struggled with high-school settings, dynamics, and character stereotypes before; and that was the case here. The first half of the story was uneventful, too. It focused mostly on Dierdre and Luke’s “courtship,” so most of the danger and revelations were postponed for the second half. And it didn’t help that the romance felt too superficial for me to believe. Maybe I’m too rational, but “insta-love” or anything close to it just doesn’t work for me.

Why did I give Lament 3 stars despite those criticisms? Firstly, because Maggie Stiefvater is a magician with words. Her writing style is smooth, carefully crafted, and vivid. This allows her narrative voice for Dierdre to pulse with life and the musical aspects of Lament to lilt and dance off the page – and stories about art or artistically inclined characters fascinate me, anyways. These highlights persuaded me to keep reading in spite of my hang-ups, and ultimately I was satisfied by the exciting, magic-filled second half and surprisingly dark, violent ending. I definitely want to read more of Stiefvater’s work, because I see so much potential in her technique. It’s just that the story of Lament didn’t totally appeal to me.

I’ve started reading Cinda Williams Chima’s The Demon King, and so far it’s not too bad. I’m also planning to read Renee Ahdieh’s The Rose and the Dagger, Elizabeth Marie Pope’s The Perilous Gard, and Heidi Heilig’s The Girl from Everywhere in May. Finally, since “Game of Thrones” is back on TV, I want to get on George R.R. Martin’s A Knight of the Seven Kingdoms soon. It never hurts to read something timely, right? 🙂