On the fifth day of each month, 5 on the 5th shares five of something that I like or recommend to readers. Whether it’s five items that share a common theme, or five reasons why I like the topic at hand, this monthly meme gives us an opportunity to talk about other subjects that aren’t normally discussed here at the blog.

AHHHHH! 19 more days until Game of Thrones is back! Is anyone else counting down, too? 😀

I’ve been a fan of George R.R. Martin’s Song of Ice and Fire books for a while, so it’s been incredible watching his “shades of gray” characters and the gritty, chaotic world they live in come to life on TV. And while Game of Thrones has deviated from its source material at times, it has still been a faithful adaptation in spirit. But this season, we’ve reached the point where the show will pass the material that GRRM has written so far. In other words, everyone – including those of us who have read the books – is in for 10 Sunday nights worth of shocking twists.

So, what am I looking forward to most for Season 6 of GoT? It was tough to narrow it down to only a few things – because there’s a TON I’m excited about. So, if there’s a storyline you want to talk about that’s not discussed in this post, feel free to do so in your comments. Otherwise, let’s catch up with the first official trailer for Season 6 after the jump.

WARNING: This post contains spoilers from both the Game of Thrones TV show and George R.R. Martin’s Song of Ice and Fire books. Also, some of the videos and links provided below may not be suitable for young readers. 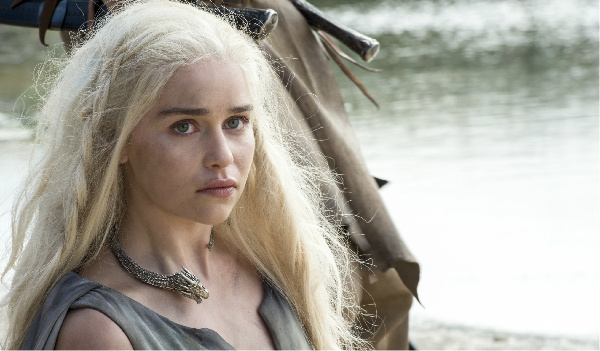 Reason #1: The fallout from Dany’s escape from Meereen and her capture by the Dothraki

In Season 5’s finale, Danaerys Targaryen had flown on her eldest dragon Drogon for the first time and fled Meereen, the city she had been ruling – only to end up in a grassy plains hundreds of miles away, and be surrounded by Dothraki. (*uh oh*) Fans didn’t need to see the other recently released stills for Season 6 to know that she would be captured.

So, what will happen to Dany now that she’s back under the Dothraki’s grip? Will Ser Jorah Mormont and Daario Naharis track her down and rescue her? There’s also Meereen to consider. With the Sons of the Harpy running amok and killing whoever they can get their hands on, how in the world will Tyrion Lannister and his colleagues find a way to rule the lawless, blood-drenched city?

I won’t even try speculating. The last Fire & Ice novel, A Dance With Dragons, only began to address post-Dany Meereen; and most of that content is irrelevant now due to character deaths on the show that aren’t in the books. Also, the Dothraki usually aren’t so kind to their captives… But Emilia Clarke has done an amazing job as Dany, and I’d like to think her time isn’t up yet. Maybe the Dothraki will use her as a bargaining tool, instead of killing her? (I probably shouldn’t get my hopes up too high, should I?) 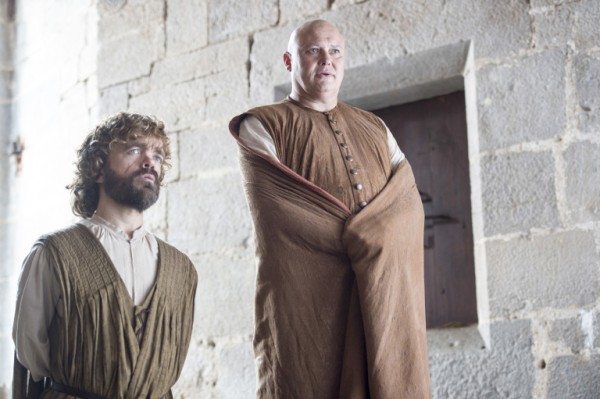 I love this duo so much. Their snipefests have provided some of the funniest and most memorable (and quotable, if you dare repeat them) lines from the show. However, Tyrion and Lord Varys (a.k.a. the Spider) have come a long way since the beginning of GoT. Yes, Varys was an important political ally when Tyrion was Joffrey’s Hand of the King, and he helped Tyrion escape from King’s Landing when he was wrongly convicted of Joffrey’s murder. (In a crate, no less!) But during Season 5, it seemed like these two were finally starting to like and trust each other.

Now, in Season 6, it looks like Varys and Tyrion will co-rule Meereen together in Dany’s absence. Part of me is already biting my fingernails over they’ll survive the whole thing. (See Reason #1 above.) The other part of me, though, can’t wait to see how these two high-minded fellows wrangle the city’s problems. It should be an interesting mix of comedy, suspense, philosophical wanderings, and (wait for it… ) blood. Hey, we ARE talking about GoT, after all. 😉

Reason #3: The return of Bran Stark

Remember Bran? (I hope so!) After finding the Three-Eyed Raven at the end of Season 4, the second-youngest Stark son (as well as his wolf Summer and companions Meers Reed and Hodor) was notably absent during Season 5. The reason? To fast-forward through Bran’s greenseer training and bring him back in Season 6. It’s a bit Luke Skywalker-ish, in that most of Bran’s training will remain unfilmed. However, according to an interview with Entertainment Weekly, Isaac Hempstead-Wright (who plays Bran) said that this coming GoT season will be Bran’s most important yet.

Personally, I missed Bran last season, so I’m glad he’s coming back. And if his visions are going to have a huge impact on the future of Westeros, then I *think* I can be forgiving of the showrunners’ decision to omit his character for one season. 😉

Remember the Battle of Hardhome during Season 5? Did its outcome scare the raven feathers out of you, too? (*shudders*)

Fans learned a lot from that epic battle against Westeros’s resident ice zombies. First, the White-Walkers are more vulnerable than everyone thought. (Thank you, Valyrian steel!) Second, they multiply like rabbits – because if a White-Walker or one of their allies kills you, you become one of them. Watch the closing scene of “Hardhome” again, and you’ll see what I mean. They show just how powerless Westeros might be to stop these guys – and unfortunately, only Jon Snow and his Night’s Watch and wildling allies are aware of how dire their circumstances have become.

It’s only a matter of time before the White-Walkers start their march south into Westeros. Will it happen in Season 6? Right now it’s hard to tell, since HBO and GoT showrunners are reportedly still in talks for Seasons 7 and 8. But that moment is coming soon… And when it does, the White-Walkers should steamroll over the Night’s Watch. Seriously. The Battle of Hardhome may have been terrifying, but that will look like child’s play after the next Battle at the Wall. 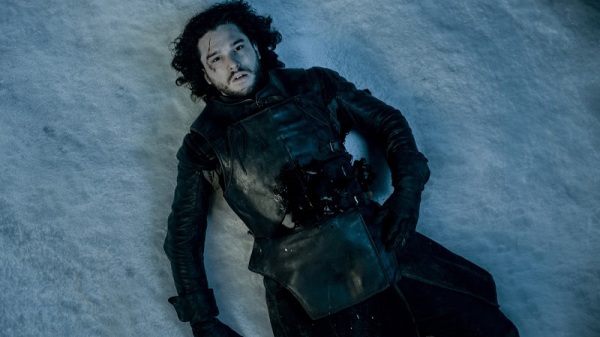 Do I think Jon is dead? Yes, sadly. Do I think he’s gone for good, period end-of-story? NO. I refuse to believe what Kit Harington has said about the only scene he filmed for Season 6. Not when he was spotted in the GoT filming areas from July to October last year. 😉

Remember – Davos Seaworth and Melisandre are still at the Wall. They weren’t onscreen when Jon was killed by the Night’s Watch, but they must be there for a reason. Plus, with all the hints last season that point toward a certain fan theory about Jon’s parentage, it’s hard to believe that he’ll no longer have a hand in shaping the future of Westeros. Unless all of the above are merely “red herrings”…

Still, here’s what I think: First, Melisandre’s religion (R’hllor, the Lord of Light) involves resurrecting the dead. (Remember this Brotherhood Without Banners scene from Season 3?) If you watch the Season 6 trailer again, who do you see lying on a table or dais of some kind? Is such a resurrection on its way, then?

Second, the fan theory about Jon’s parentage is pretty much 99.99999% true. Again, too many hints regarding the Fan Theory were dropped last season for it to not be. So, if Jon is resurrected from the dead, will he still be Jon Snow? Or, will he assume a new name? I wouldn’t be surprised if he does – or if, at some point later in GoT, he and Dany end up on the same side of the massive war that’s surely coming.

Do you watch “Game of Thrones”? What are you looking forward most to seeing this season? Any predictions for what might happen?