This Sunday, July 9th marks my eighth blogoversary! And based on the results of this recent poll, this year’s celebration is going to be… giveaways! (Many thanks to everyone who voted, btw!) This is perfect, because blogoversaries aren’t just a time of virtual cake, confetti, and fireworks. They’re also a great opportunity to thank readers for their friendship and support, no matter how long they’ve been following you. So, consider this week’s and next week’s posts my gift to you guys. (*bows in gratitude*)

For this first giveaway, I wanted to do something bookish, but something different from the usual “favorite reads or authors of all time” theme. Then I read these recent Top 10 Tuesday posts by Sarah J. Higbee and The Bibliosanctum, and a lightbulb turned on. So, here are Ten Unique Reads I Highly Recommend, along with links to my reviews at Goodreads. At the end you’ll find a Rafflecopter link and instructions for how the giveaway will work. Sounds like a plan, yes? 😀
END_OF_DOCUMENT_TOKEN_TO_BE_REPLACED

Like Tuesday’s list, this one will go in ascending order (suspense is the key, remember? *winks*) and will feature a brief explanation of why I included it on this list, as well as links to each review. I’ll also post my reading statistics for 2015, including how many books I read, which genres I read most, and a few random yet interesting bits I discovered along the way. Shall we begin?

END_OF_DOCUMENT_TOKEN_TO_BE_REPLACED

Something electric must be in the air. Out of the five books I read in October, I enjoyed four of them enough to write reviews. So, those positive bookish vibes that made September a great month for reading haven’t gone away yet. 🙂

What also made October a fun month for reading was including two “Halloween-ish” novels. Not scary horror stories by any means, but stories with a creepiness factor that fit the time of year. You’ll see what I mean as you check out the reviews, starting with my Read of the Month, which is…
END_OF_DOCUMENT_TOKEN_TO_BE_REPLACED

END_OF_DOCUMENT_TOKEN_TO_BE_REPLACED 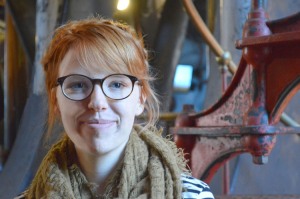 There’s something exciting about finding writers who live in your local area, especially if they write one of your favorite fiction genres. That happened earlier this year when I heard about Mackenzi Lee and her debut YA novel This Monstrous Thing. We both live in the Boston area, and her story melds historical fiction with steampunk – with the added bonus of Frankenstein. I wouldn’t say I’m not a fan of Frankenstein, but it’s also not something I’ve read much about. That said, when I read the blurb for This Monstrous Thing, the first three words that entered my mind were, “MUST READ THIS!”

This Monstrous Thing officially comes into the world next Tuesday, September 22nd. Which means it’s the perfect time to invite Mackenzi for an author interview! Today you’ll learn more about her novel and her path to becoming published, as well as her writing influences and her thoughts on the importance of sibling relationships. There might also be some bits about Mary Shelley, Tulipomania, and Jonah Hill gifs. Enjoy!

END_OF_DOCUMENT_TOKEN_TO_BE_REPLACED

Waiting On Wednesday is a weekly event hosted by Breaking The Spine that spotlights upcoming book releases that I’m looking forward to. My WOW postings won’t be weekly, but they’ll come on Wednesdays when my blogging schedule is open and when I add a yet-to-be-published book to my wishlist.

This Wednesday, I’m waiting on This Monstrous Thing, the debut novel by Mackenzi Lee. Frankenstein-ish stories usually don’t appeal to me, but that was before I read Mackenzi’s recent interview at EM Castellan’s blog. Her answers sing with intelligence, passion, and personality; and I was immediately drawn to her blended love of historical fiction and fantasy. You know what really seized my attention, though? Mackenzi lives in Boston, and works at Porter Square Books in Cambridge! So I’m happy to support a writer who lives near me. And between the suspenseful blurb and the brilliant, ominous cover, I’m excited to see what This Monstrous Thing is all about when it’s released next month. 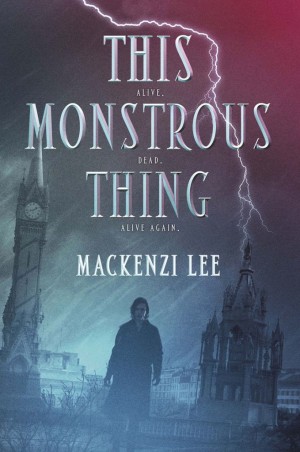 His chance to break free of Geneva—lost.

Heart-broken and desperate, Alasdair does the unthinkable: He brings Oliver back from the dead.

But putting back together a broken life is more difficult than mending bones and adding clockwork pieces. Oliver returns more monster than man, and Alasdair’s horror further damages the already troubled relationship.

Then comes the publication of Frankenstein and the city intensifies its search for Shadow Boys, aiming to discover the real life doctor and his monster. Alasdair finds refuge with his idol, the brilliant Dr. Geisler, who may offer him a way to escape the dangerous present and his guilt-ridden past, but at a horrible price only Oliver can pay…

What book(s) are you waiting on this Wednesday? Are you also looking forward to This Monstrous Thing?