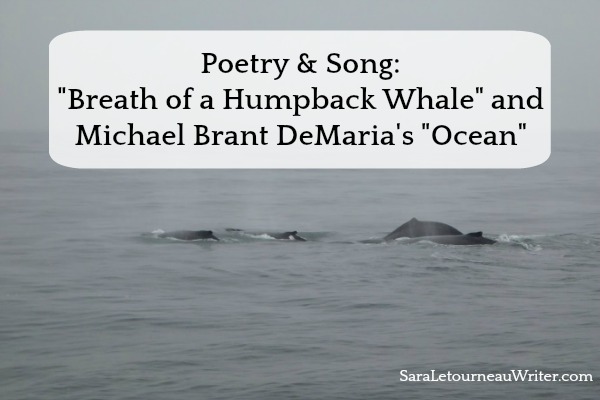 It’s been a while since the last Poetry & Song post, hasn’t it? I’ve been meaning to write ones for some of my older, previously published poems and the songs that “helped” me write them. But now that a few “newbies” have debuted over the past few months, it’s time to start highlighting those instead. 🙂

So the spotlight turns back to “Breath of a Humpback Whale” today. What’s interesting about this edition of Poetry & Song isn’t what inspired this piece (though the inspiration itself is incredible), but rather the transformation this poem went through from initial spark to publication. In fact, Michael Brant DeMaria’s “Ocean” didn’t become part of the process until the poem’s last round of revisions. But that proved to be the perfect time for music and poetry to come together.

First, click here to read “Breath of a Humpback Whale” at Muddy River Poetry Review. Then feel free to keep the tab open as you read this post.

The idea for “Breath of a Humpback Whale” came to me during a whale watch I went on in October 2017. It was my first whale watch ever, and the excitement I was feeling beforehand was so palpable, it could have been electric. At one point early on in the watch, after the first few humpbacks had swum past the boat, the naturalist who was narrating our trip said something along these lines over the intercom:

“See if you can hear the whale inhale after it exhales. Everyone knows what a whale’s exhalation looks and sounds like. Their inhalation is more difficult to pick up on, but it’s my favorite sound in the world.”

So as I went back and forth across the boat, taking pictures of the whales and watching them surface and dive down again, I listened for that inhalation after the explosive exhalation. And the naturalist wasn’t kidding. After an hour, despite how closely I’d been listening, I still hadn’t heard the sound. (Try it for yourself with this YouTube clip, and you’ll know what I mean.) All the other noises and commotion on the boat weren’t helping, either. But I was determined to keep trying, so I could experience this beautiful thing for myself, no matter how brief that moment would be.

About a half-hour later, just before the boat turned on its engine to start the journey back to shore, I heard it.

I don’t know if I’ll ever find specific words to “define” a whale’s inhalation. “Low” and “deep” fit well enough, but they don’t quite capture how low and how deep. There’s a substance and immensity to the sound that defies simple description. And yet, I wanted to find a way to describe what I had heard. I wanted to put the impossible into words – and what better way to accomplish this than through poetry?

If At First You Don’t Succeed, Put Aside and Then Rewrite

Writing the early versions of “Breath of a Humpback Whale” didn’t seem too difficult. I was sure of everything I wanted to include: imagery that evoked the magnitude and beauty of the humpbacks moving through the water, specific details of the whales’ tail flukes and body shape, the tourists’ awe and admiration for these creatures, and my desire for this moment to imprint itself in my memory like a photograph. I also devoted the final stanza to the sound of the whale’s inhalation, using metaphors to try to describe the depth, texture, and tonality of that sound in a way that normal adjectives couldn’t.

The strange thing about those early drafts of the poem, though? I don’t remember listening to any music while I worked on them. Maybe it was because the spark for this piece was a sound itself, and I didn’t want music to “drown it out,” so to speak.

By February 2018, I was satisfied enough with “Breath of a Humpback Whale” that I included it in a three-poem submission to a nature-centric literary journal. One of those poems was accepted (yay!), but “Breath” was not. As I’d learned before, sometimes a rejection comes down to an editor’s personal tastes, and other times it means a poem still needs work. Since I wasn’t sure how to improve on “Breath” just then, I set it aside for a couple months, hoping the time away would give me a new perspective on it.

Boy did it ever. When I returned to “Breath” over the summer, the new path forward was clear. The poem needed to be simplified, condensed. Yes, the wordplay rolled off the tongue nicely, and the conjured images were evocative. But the heart of the poem, the purpose for my writing it in the first place, was muffled by everything else I’d crammed in.

So I completely rewrote “Breath.” This time, I made the challenge of listening for the whale’s inhalation the main “conflict,” bringing in phrases from the previous draft that still fit as well as bits from the whale watch that I hadn’t included before. I also reframed the poem to read as if an adult was speaking to a child. As if a calm, gentle voice was guiding the reader through the chaotic distraction of a boat filled with tourists, helping them hear a sound that’s almost undetectable to the human ear, and realizing how lucky they are to experience it.

This was also when the title track from Michael Brant DeMaria’s Ocean came into play. As DeMaria explains in this interview, this album pays homage to – what else? – the ocean and was composed after DeMaria’s family home was nearly destroyed during Hurricane Ivan in 2004. He also says this about Ocean on his website:

“As a psychologist and musician, I was interested in creating an ambient journey designed to help people deeply let go—including employing ultra-low bass sounds to help entrain brain waves towards deeper states of relaxation.”

That “ultra-low bass sound” was on my mind when I was rewriting “Breath of a Humpback Whale.” I was craving music this time, specifically an instrumental that was reminiscent of the sea or the sound of the whale’s inhalation. “Ocean” was the perfect choice.

Listen to the song in the YouTube clip below. Doesn’t it sound like the ocean? The synthesizers have a low, shimmering resonance that mimics the movement of waves above the surface and evokes the mesmerizing dark blue color of the water. Even DeMaria’s flute-playing uses the lowest notes in its range in an intriguing way. If you close your eyes, maybe you can picture a humpback whale swimming, slowly and patiently. At least, that’s what I see when I listen to “Ocean,” and that’s why I felt it fit the new vision I had for the poem.

It’s Worth the Time and Effort to Revise and Reimagine

Sometimes I run into poets who rarely revise their work. I’m not sure if they’re afraid of making changes or struggling to put emotional distance between themselves and the first draft, or if they’d rather just write rather than balance the writing with the polishing. The reasons can be personal sometimes, and I prefer not to pry unless someone asks for advice. If they do, I make the case that, yes, it’s worth the time and effort to revise – and sometimes reimagine – your poems. And now, I can use “Breath of a Humpback Whale” as an example.

Why? Because after rewriting it, sharing it with friends, and editing it further, I submitted “Breath of a Humpback Whale” with two other poems to Muddy River Poetry Review in August 2018. One week later, the editor replied – and accepted “Breath” as is.

So, to any poets who read this, don’t be fearful of revising your work. It can be daunting, but it’s often the most important step you can take in getting your poems published. And in some cases, it will be worth the patience and persistence in the end.

Do you listen to music while you write or revise your work? What was the most recent instance, and how did the music influence your writing? Also, have you ever rewritten an entire poem, manuscript, etc. because you realized you had initially taken the wrong approach?