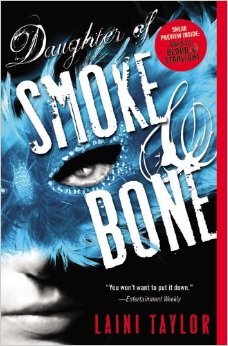 Around the world, black handprints are appearing on doorways, scorched there by winged strangers who have crept through a slit in the sky.

In a dark and dusty shop, a devil’s supply of human teeth grow dangerously low.

And in the tangled lanes of Prague, a young art student is about to be caught up in a brutal otherwordly war.

Meet Karou. She fills her sketchbooks with monsters that may or may not be real; she’s prone to disappearing on mysterious “errands”; she speaks many languages–not all of them human; and her bright blue hair actually grows out of her head that color. Who is she? That is the question that haunts her, and she’s about to find out.

When one of the strangers–beautiful, haunted Akiva–fixes his fire-colored eyes on her in an alley in Marrakesh, the result is blood and starlight, secrets unveiled, and a star-crossed love whose roots drink deep of a violent past. But will Karou live to regret learning the truth about herself?

Part of me wishes I was writing this review at soon as I finished Daughter of Smoke and Bone, at 12:30 a.m. when my flurry of emotions was still fresh. Funny thing is, I’m still lingering in that state of bewitchment a couple weeks later. I devoured this book in 4 days – ungodly fast for me, and a clear sign of a page-turner. But it’s also left me reeling. I’m still haunting by it and wading in its world even while reading a completely different book… Which means I need to add Daughter of Smoke and Bone to my list of all-time favorite novels.

I have to be a bit vague in summarizing Daughter of Smoke and Bone, since I’m afraid of revealing spoilers. This is a dual POV novel that follows Karou, an art student in Prague who lives a double life as an errand-runner for the chimaera and knows nothing of her past; and Akiva, an embittered seraph warrior whose people are the chimaera’s sworn enemy. Most readers might call this a paranormal romance because of the “angels and demons” spin, but the story transcends that label’s stereotypes. Besides the love story, there’s magic, otherworldly peoples with their own languages and cultures, and portals all over Earth (mostly Prague and Morocco) that lead to the realm of Eretz. With all that in mind, I’d categorize Daughter of Smoke and Bone as high fantasy with splashes of urban fantasy, paranormal romance, and horror. A square peg that refuses to fit into a round hole, and exquisitely so.

What struck me first was the quality of Taylor’s writing. Her fluid, vivid style in her middle grade fantasy Blackbringer enchanted and inspired me. In Daughter of Smoke and Bone, it’s pure sorcery. Taylor chooses her words with such precision that… well, it was impossible to believe the story wasn’t real. It made the chimaera’s blend of human and animal aspects terrifyingly beautiful, the chemistry between Karou and Akiva soulful and electric, and their fears and anguishes palpable. At times I felt like I was walking Prague’s streets, sweating from the heat and bustling markets of Marrakesh, and dancing in the chimaera capital of Loramendi. Plus, Taylor wields a heightened vocabulary that I lapped up like nectar. I must have looked up definitions for close to 50 words while reading this book – and I didn’t mind one bit. Taylor mentions in this interview that she had originally tried her hand at literary fiction before returning to her first love of fantasy, and that clearly shows in Daughter of Smoke and Bone without making the reading level too challenging for her teen audience.

Because of how gorgeously Daughter of Smoke and Bone is written, everything else falls into place effortlessly. Including the characters, who were all compelling in their own way – even Karou’s somber mentor Brimstone. But I’ll focus on my three favorites here. Karou starts off as a rebellious, vindictive teenager with a talent for drawing, a surprising wellspring of trivia, and a yearning to understand where she came from. The story revolves mostly around her discovering this truth, and she matures immensely as a result. Best friend and puppeteer-in-training Zuzana is wickedly funny, and remains loyal to Karou even as the insanity unfolds. Akiva, on the other hand, is a flying wall of flame and ice at first. Years of fighting have forced him to numbed him to humor or emotion. But once Akiva meets Karou and becomes invested in her mystery, he gradually softens into a more relatable, tragic being, and by the end I truly sympathized for him.

What makes Daughter of Smoke and Bone all the more intriguing is that it ignores the “angels and demons” clichés. No one race is painted as the good guys or the villains here. Some of the seraphim can be punishing, emotionless soldiers, while certain chimaera possess hearts of gold. Because of this approach, Taylor reminds readers that members of every race in this story (seraphim, chimaera, and humans) has some degree of humanity. That makes the concept of war between the two supernatural peoples that much harder to bear, and the thought of choosing a side paralyzing.

Before diving into Daughter of Smoke and Bone, it’s worth knowing that the structure is a bit of an anomaly. The main story plays out in “real time” for the first 300-ish pages, with occasional flashbacks from Karou and Akiva; and then the final 100 pages are mostly flashbacks triggered by a “spell” that Karou breaks. Some readers weren’t fans of this format, and I agree that it spoils one of the major plot twists. That said, I believe the structure was worth the risk. The rush of memories isn’t backstory, but an integral part of the story itself, answering Karou’s questions about herself and her involvement with the chimaera. Even though I managed to figure out a few things before she did, I remembered to put myself in her shoes. That allowed me to experience Karou’s wonder, joy, and terror as she experienced it. Had this particular set of flashbacks been treated like typical backstory and sprinkled throughout the book, the story would have lost its emotional impact – and the last couple pages might not have broken my heart.

I thought I’d have to struggle to describe how much I love this book… But judging from the length of this review, I guess I didn’t. Because Daughter of Smoke and Bone is nothing short of spell-binding, with some of the most masterful world-building, character development, and writing I’ve ever encountered. This is no ordinary YA fantasy, either. Adults who hesitate to read fantasy novels geared for teens really should give this one a shot. I won’t forget Daughter of Smoke and Bone anytime soon, and I can’t wait to read the rest of the trilogy once I get my paws on the other two books.

Have you read Daughter of Smoke and Bone? What did you think of it? If you haven’t read it yet, do you think you might check it out based on what you’ve read above? Let me know by commenting below or visiting the same review at Amazon or Goodreads.

43 thoughts on “Recent Reads: “Daughter of Smoke and Bone” by Laini Taylor”

So when I said in yesterday's post to stay tuned to news about another poetry reading, I meant VERY soon. 😁 Join me next Thursday, April 29, at 7:00 p.m. Eastern for a poetry reading on Facebook to celebrate National Poetry Month! This is a free event, and all you need to do is visit my public FB page to watch the video live stream . . . and maybe bring a favorite beverage or snack. ☕️🍿
Happy Sunday, friends! The latest issue of the nature poetry journal THE AVOCET is out, and it features my poem "Fog Rolling In from Oyster Pond." This is one of my favorite poems I wrote last year, and I'm thrilled it has found such a fitting home. 🌫️ 🏖😃
Go ahead, my friend. Choose a rose for yourself. You deserve it, after all. 🌹❤