I’m not gonna lie – I was SO excited when Victoria Grace Howell nominated me for this blog tag (thank you, Tori!) that this was my reaction.

OK, maybe that’s an exaggeration… But music is one of my many loves in life, along with writing, books, and tea. So if you’re a music fan as well, fair warning: This post features YouTube videos. It also features links to more YouTube videos. I tried not to go overboard… but you still might be here a while. 😉

END_OF_DOCUMENT_TOKEN_TO_BE_REPLACED 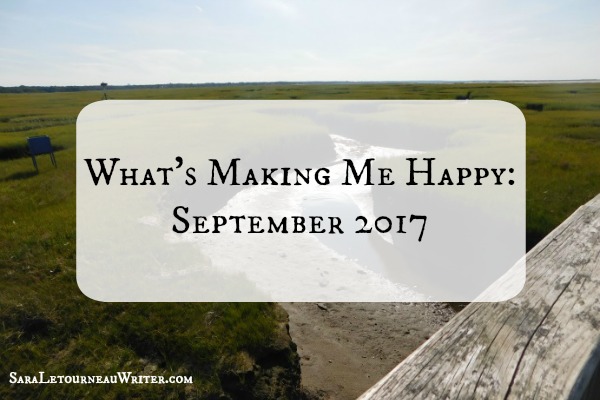 I love September. Firstly, it’s my birthday month. 🙂 But secondly, September is a gorgeous time of year in Massachusetts. Maybe that explains why this month was a balance of indoor activities (the new WIP, reorganization / decluttering projects) and outdoor fun. There were a couple lows (ongoing anxiety, plus a dishwasher leak), but in short September was joyful and productive, with much to be thankful for.

In fact, it was such a good month, I had such a hard time narrowing down my list of joys for this Happy post. But that’s not such a bad thing, right? In the end, I settled on five that best represent the sights, sounds, tastes, and experiences that made my heart sing. And as always, feel free to share your joys of the past month in your comments!

END_OF_DOCUMENT_TOKEN_TO_BE_REPLACED 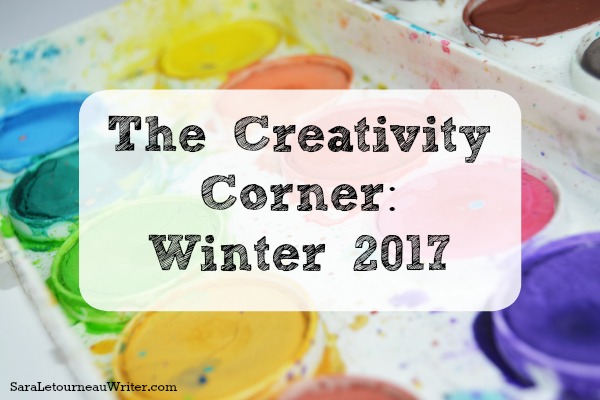 It feels weird to post a wrap-up of a winter’s worth writing, reading, and other creative happenings on the second day of spring. (This is the new “writing monthly update” series I had mentioned last month, btw.) But the truth is, I’ve procrastinated on this post for a couple weeks now, and not due to lack of time. Instead, I’ve been feeling anything but enthusiastic or confident about writing lately.

The good news is, I’m now taking steps that can hopefully help me regain that confidence and lead to a better, more productive spring. I’ll touch on that, as well as the progress I’ve made so far with The Novella (my new writing project) and the books I’ve read so far this year. Also, since this is the first Creative Corner, any feedback on the content and/or setup will be greatly appreciated. 🙂
END_OF_DOCUMENT_TOKEN_TO_BE_REPLACED

Plus, Four Within Temptation Songs from the WIP’s Novel Playlist

Chronicling The Craft is a series where I share my experience with working on my YA fantasy novel THE KEEPER’S CURSE, which is now in its third draft. These articles alternate between a) progress updates and fun “TKC-related” content, and b) revising / editing tips. Today marks 40% completion of Draft #3, with a new progress report and more songs from TKC’s novel playlist.

I’m going to try my hardest to not start this post like a ping-pong ball bouncing off the walls… Oh, forget it, I’ll do it anyway.

To be honest, aiming to get The Keeper’s Curse under 105K was a conservative goal. I was aware of that going into Draft #3 – but I also underestimated how much editing the manuscript needed. The longer, overwritten chapters have benefited from the most trimming, but even some of the shorter chapters are 200 or 300 words slimmer now.

So, what happens now that I’ve already reached my word-cutting goal for this draft? And what playlist goodies do I have to share today? Hop in and find out!
END_OF_DOCUMENT_TOKEN_TO_BE_REPLACED

If you follow me on Twitter, you might have noticed my #WIPjoy Tweets during the month of June. This meme is a month-long challenge led by YA sci-fi and fantasy writer Bethany A. Jennings; and for every day of the month, writers answer a specific question and share bits about their current work-in-progress (WIP). Participants can also take the meme to Facebook, their blog, and other social media outlets they use.

The “index” image for #WIPjoy June 2016, courtesy of Bethany A. Jennings. Click to view a larger version.

This  was my first time participating in #WIPjoy, and it was a lot of fun! It especially gave me a chance to learn what other writers are working on, get a taste of their writing style, and cheer them on as they work on their drafts. Now I’m even more excited to read some of those stories when they’re published someday!

And what I did I share for #WIPjoy? The Keeper’s Curse, of course! (It IS my only WIP at the moment. *lol*) So, I thought I’d share a collection of my #WIPjoy Tweets here with you. This post doesn’t contain all of my Tweets from the challenge – but it does feature some of my favorite questions / answers, and several of the excerpts I shared. Feel free to share any feedback in your comments, or “like” or “retweet” any of the linked Tweets. 😉 Enjoy!

END_OF_DOCUMENT_TOKEN_TO_BE_REPLACED

An Ode To… is a bimonthly meme where I pick one of my favorite musicians / bands and share some of my favorite songs by them. Maybe you’ve heard of said musician / band before, or maybe you’re about to discover fantastic music to add to your library. So, sit back, listen, and relax – or, in some cases, headbang. *wink*

For this Ode, I’d like to introduce you to a Dutch band I’ve been a fan of for a long time. If you enjoy symphonic rock and metal bands like Evanescence and Nightwish, then you might already be familiar with this quintet. If you’re not familiar with any of those bands… Get ready for some orchestral and choir arrangements that will remind you of the Lord Of The Rings soundtracks, set over metal music with catchy melodies and an angel for a vocalist. 😉

END_OF_DOCUMENT_TOKEN_TO_BE_REPLACED

This Blog Hop stop has been in the works long enough that not one, but two fellow writers invited me to take part: Angela B. Chrysler, and E. Rawls. I “met” Angela on Twitter (I think?) late last year, and we immediately bonded over our love of fantasy literature and our dreams of becoming published authors. She’s now preparing to self-publish her debut novel, Dolor and Shadow, which is due out in late May. As for E. (full first name is Elizabeth), she was also nominated by Angela for the same blog hop; and like me and Angela, she’s a fantasy writer and Tolkien fan. Thank you, ladies – and sorry it’s taken me so long to respond!

Here’s some information and rules about the One Lovely Blog Hop:

This blog hop is designed to show our readers a more personal side to ourselves. We’ve been challenged by another author/ blogger (somewhat like the ‘ice bucket’ challenge) to list seven interesting facts to help cast light onto that tough writer’s/ blogger’s persona we all like to project. But we want to show that behind every story is a story, our story, my story; and like everyone else, I have dreams, hobbies, problems, and goals. This blog hop is a way to share some of them with you, my readers.

The rules are that I share 7 Lovely Facts about myself, and links to a maximum of 15 blogs that I enjoy reading. If I’ve nominated your blog (see names below) please don’t feel any obligation to join in but, if you do, please link back to the blog of the person who nominated you (that would be me, Sara Letourneau), share facts about yourself, and nominate 15 blogs (or as many as you can).

My brain tends to freeze when I have to think of random things to share about myself… But I’ve come up with seven that fit the billing. 😉

END_OF_DOCUMENT_TOKEN_TO_BE_REPLACED

Boy did I have to wrack my brain to figure out how I felt about this album. And anyone who knows my taste in music well enough knows that Within Temptation has been one of my favorite bands for nearly a decade. So, naturally, I was excited for the Dutch symphonic metal band’s sixth studio album, Hydra. This is WT’s most sprawling set to date, with songs that draw from every possible corner of their sound. Thunderously heavy, dreamy and pop-tinged, bombastic and cinematic, airy and melancholy – you truly get it all here. Hydra also features four guest vocalists with equally unique sounds: metalcore titan Howard Jones (ex-Killswitch Engage), soprano star Tarja Turunen (ex-Nightwish, now solo), Soul Asylum frontman David Pirner, and – bet you didn’t see this coming – rapper Xhibit.

The overall opinions on Hydra have been as varied as the sounds WT explores on Hydra: Some people love it, others don’t, and still others are torn by it. I’m in that third category – which has turned this from a normal CD-reviewing experience into hair-yanking agony.

Truthfully, I enjoy a number of songs from Hydra. “Dangerous” absolutely rocks, with palpable tension, stormy rhythms, and one of the most unexpectedly awesome vocal collaborations I’ve ever heard.  Other dramatic uptempo numbers (“Tell Me Why,” “Silver Moonlight”) whisk you away to metal fantasyland, while the strongest ballads (particularly “Edge Of The World”) envelop you with evocative melodies and arrangements. Some tracks also hearken back to older WT records; “Covered By Roses,” for example, would have fit The Heart Of Everything as well as Hydra. Then then are songs that either I’ve remained indifferent toward after several listens or that fall short of WT’s usual high standards of lyrics (“Dog Days,” particularly the chorus) and overall impact (“Let Us Burn” lacks that special “kick-off” spark). Finally, four is an annoying high number of guest collaborations on a rock or metal albums. It’s nice to see and hear WT in that kind of spirit, but it’s overkill. They’re who I really want to listen to when I play a WT album.

My best advice when it comes to Hydra is to listen with an open mind. You might love everything you hear, or you might not. Or you might seesaw back and forth, like I did. And you’ll find this rift in opinions in the reviews you’ll read on Hydra on Amazon as well as webzine and print reviews. Personally, I like Hydra, but it’s inconsistent. I skip over a few tracks because they don’t appeal to me, and one or two others get little more than a shrug as my reaction. This doesn’t mean I’m jumping off the WT bandwagon. It just means this album leaves me dissatisfied, and it’s hard to hide it when one of your all-time favorite artists leaves you feeling that way.

Deciding whether to buy Hydra from Amazon? Let me know whether you found my review helpful by clicking here and selecting either “Yes” or “No.”

We’ve reached the end of the Sonic Cathedral Retrospective countdown! I’ve been listing my 20 favorite artists that I’ve covered in my five years of writing at the Sonic Cathedral WebZine. And today, it’s time to reveal the top five – including the artist I chose for #1!

First, in case you’ve missed the previous installments, here they are:

So if we left off at #6, that means we’ll start tonight with…

END_OF_DOCUMENT_TOKEN_TO_BE_REPLACED

Hope all of you enjoyed your holidays and are looking forward to 2012. I know I am. But before I think too into the future, I’d like to take a look back on the music of 2011. For me, 2011 got off to a slow start but picked up in excitement by summer’s end – and then a slew of great albums came out in early autumn to intrigue me further! So, which 10 albums did I enjoy the most? Most importantly, which one took my top spot?

Note: If you’re friends with me on Facebook, chances are you’ve already seen this list. This version is a little more interactive, however, and also reveals my favorite songs from each album.

Let’s get started with… END_OF_DOCUMENT_TOKEN_TO_BE_REPLACED