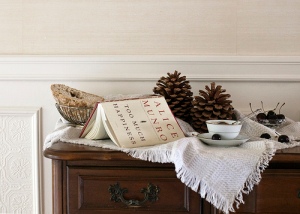 You can only leave things lying around for so long…

I finally got around to some long-overdue site updates. The following pages now contain more accurate information regarding my current writing activities. Plus, I feel more organized now. Yay for getting things done! 🙂

Here are the most recent changes:

Also, two new article series are coming soon! They are:

And… there may be more excitement around the corner! I can’t say much right now, as I want to see how things play out over the next couple weeks. But I’m buzzing with joy and anticipation just thinking about all the opportunities. If anything does work out, I’ll let you know as soon as I can confirm it. 😉

Hope you’re all doing well right now and enjoying your summer (or winter, if you live in the Southern Hemisphere)!

All the best,
Sara

It’s been a while since I wrote for Suite101. So now here’s a review on music that’s not female-fronted metal, but metal nonetheless.

Katatonia is probably one of my top five male-fronted metal bands of all time. Mostly because their 2009 album Night Is The New Day blew me away with its gorgeous, doom-influenced soundscapes. So, I was looking forward to reviewing their new album Dead End Kings for Suite101. And… well, I was disappointed. Not completely, as I enjoyed at least half of the songs, a select few immensely (“The Parting,” “Dead Letters,” and “Buildings”). Otherwise, I felt Dead End Kings wandered more than rocked. I even likened the album to “a ghost keeping its distance from the churning sea below.”

Don’t let my opinion stop you from buying Dead End Kings if you’re a Katatonia fan. That’s just how I feel about the album. And as always, I point out what I think are strengths as well as weaknesses. Never expect a bashfest from me – I’m not that heartless of a reviewer!

My latest review at Suite 101.com tackles the self-titled third album by the biggest name in female-fronted rock music: Evanescence. It turns out that a five-year hiatus and a more collaborative songwriting process has encouraged the band to steer their music in a (slightly) new direction. The result is Evanescence, a less bombastic and more straight-up rock record than Evanescence’s previous album, The Open Door. However, does this change work in Evanescence’s favor?

Click here to read my review of Evanescence’s self-titled album.

Let me know what you think!

As I had promised, I’ve finally made a number of updates to my site. These changes reflect the work I’ve done over the past several months as well as the new websites I’ve become involved with this year. Here is a list of what’s new: END_OF_DOCUMENT_TOKEN_TO_BE_REPLACED