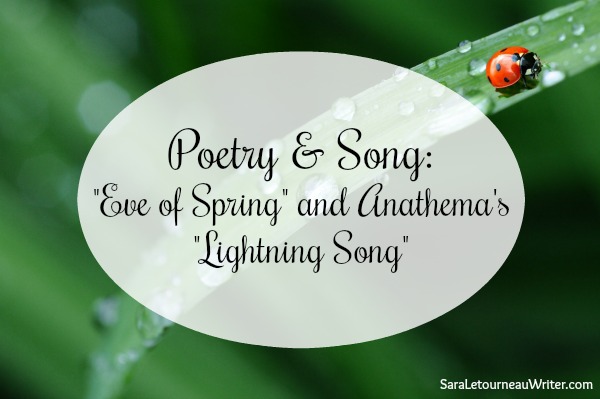 Do you listen to music while you write? Has a specific song or music artist ever influenced one of your stories, poems, etc.? This has happened with a number of my published poems. Thus, Poetry & Song is a limited-run series where I share one of my published poems and the song that “helped me write” it. I also offer insights into why I chose that particular piece of music, as well as any other inspirations for the poem.

After the amazing response to the first Poetry & Song post back in May, I knew I’d have to write another one down the road. Today happens to be a good day for that, because… um, well, September 5th is my birthday. (*blushes*) But that’s all the attention it’s getting. Instead, the joy and gratitude I always feel on this day gives me reason for blogging about “Eve of Spring.”

What? You say spring was five months ago? Who’s counting, though? 😉

Today I’m sharing “Eve of Spring” and the life-changing song I listened to as I wrote it. And together, both pieces were among the saving graces that helped me through one of the most challenging periods in my life.

END_OF_DOCUMENT_TOKEN_TO_BE_REPLACED

The 40th anniversary issue of the Curry Arts Journal is out! The special edition was published just in time for Curry College’s Homecoming Weekend on Saturday, October 19 and Sunday, October 20. It features new and previously published works by current students and alumni. I’m honored that the staff chose to include three new poems of mine: “Eve of Spring,” “Nightmusic,” and “The Critic and the Muse.”

The 40th anniversary issue is not available online or for purchase outside Curry. So, I took some photos of the issue for you to see. Have a look!

My poem “Eve of Spring,” as printed in the 40th anniversary issue of the Curry Arts Journal.

My poem “Nightmusic,” as printed in the 40th anniversary issue of the Curry Arts Journal.

My poem “The Critic and the Muse,” as printed in the 40th anniversary issue of the Curry Arts Journal.

The Curry Arts Journal staff is also uploading the pieces published in the 40th anniversary issue onto their website. Once my poems are online, I’ll share the links with you here.

Coming Soon: My review of Ayreon’s The Theory Of Everything should be online at Sonic Cathedral next week.

I just realized this is happening next week, and I haven’t announced it yet. Oops! Here’s an Open Mic Night I plan to attend later this month:

Curry College, my alma mater, is celebrating the 40th anniversary of its student literary magazine, The Curry Arts Journal. The CAJ staff have planned two events for this occasion on Saturday, October 19th. In the morning, a CAJ Panel featuring previous student editors of the lit mag will discuss their creative endeavors during and since college, as well as the importance of CAJ to Curry’s history and culture. Later that evening, alumni will be reading selected works from the upcoming 40th anniversary CAJ issue, which will feature new work as well as republished favorites. I will have one old piece (“Writer’s Block”) and three new pieces (“Eve of Spring,” “Nightmusic,” and “The Critic and the Muse”) in the 40th anniversary issue.

The Open Mic Night will be held in the Large Meeting Room at Curry’s Student Center from 7:00 to 9:00 p.m. Hope you can make it!

Coming Soon: My review of The Mariana Hollow’s new EP Scars, Not Wounds will be online at Sonic Cathedral soon. Also,  I should pass the 25,000-word mark on my novel-in-progress this coming weekend! And if you’ve been following my “Chronicling The Craft” series so far, you’ll know what that means!  😉

Two literary magazines have accepted my work for publication later this year!

First, Soul-Lit, a Massachusetts-based online journal that focuses on spiritual poetry, will feature my new poem “Elegy” in its Summer 2012 issue. If you read my recent report on the 2013 Massachusetts Poetry Festival, Soul-Lit may sound familiar. Its editors put on the “Soul-Lit: A Panel on Spiritual Poetry” event that had resonated with me. I even mentioned in the blog entry that I was planning to submit work to the journal after attending that event.

Second, three previously unpublished poems – “The Critic And The Muse,” “Nightmusic,” and “Eve Of Spring” – will be included in The Curry Arts Journal’s 40th anniversary issue this fall. The Curry Arts Journal (also known as CAJ) is the student literary magazine of Curry College (my alma mater) in Milton, Massachusetts. As part of the upcoming milestone, CAJ’s faculty advisor invited alumni who had published poetry, short stories, essays, and artwork in the journal as students to submit new work. The CAJ editorial staff is also planning on-campus activities to celebrate the anniversary.

I can’t express how grateful and ecstatic I am to be a part of both publications. I also recommend you check out both Soul-Lit and CAJ if you have a chance. You can read past issues of Soul-Lit here and find more information about CAJ on Facebook and at Curry College’s website.

Soul-Lit’s Summer 2012 issue will be online in July, and the 40th Anniversary Issue of The Curry Arts Journal should be published in September. I’ll share any links here as soon as they’re available.

Coming Soon: My review of Edenbridge’s The Bonding should be online at Sonic Cathedral by this weekend. Plus, as I’ve promised, a new “Chronicling The Craft” article will be posted after I’ve reached the 10,000-word mark in my novel-in-progress.