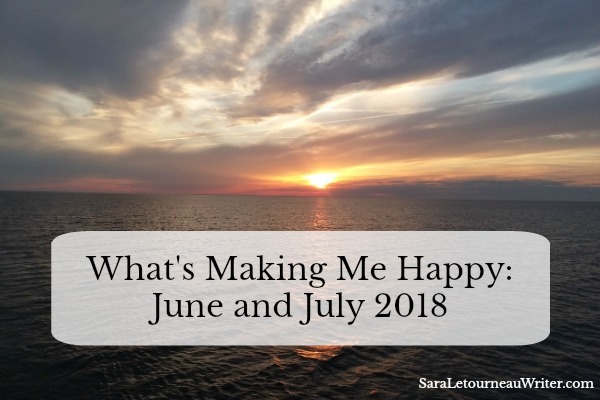 Ah, summertime in Massachusetts. Some days it’s hot, humid, and a bit thunderstormy. Other days it’s milder and absolutely gorgeous. Unfortunately it’s also been dry, and the lawns are starting to turn that worrisome “drought” shade of light brown. Hopefully we’ll get some soaking rains soon.

Other than that, I really can’t complain about June and July. That’s not to say that life was perfect (I’m recovering from another bout of writer’s doubt… but that’s a story for another day). But there was a lot to be happy, excited, or grateful over the past two months – enough that I had some trouble narrowing it down to three highlights per month! So let’s kick things off with…

What Made Me Happy in June

As part of a combined Father’s Day and birthday celebration for my dad, my family and I went on a Lobster Roll Sunset Cruise during one of my June visits to Cape Cod. This dinner-and-party boat sails out of Sesuit Harbor and into Cape Cod Bay so patrons can enjoy the picturesque views of the coastline and the summer sunset as well as food prepared in the boat’s state-of-the-art galley kitchen. (Hence its name, since lobster rolls are on the menu!) Most of that day had actually been overcast, so we were worried we wouldn’t see the sun during the cruise. But as you can see in the photo above, the sky cleared off just in time.

There’s always plenty to do on Cape Cod, regardless of the weather. So when rain forced me and my parents to postpone a day trip to Chatham, we went to the Sandwich Glass Museum instead. This museum features multiple exhibits and a short documentary that pay tribute to the town of Sandwich’s role in the U.S. glass industry during the 1800s, as well as thousands – yes, THOUSANDS – of lamps, decorations, jewelry, and other items from the Sandwich Glass Company’s history and from contemporary artists. And the highlight of our trip? A live glassblowing demonstration! We watched as a local glassblower used the museum’s brick furnace and several tools to twist, turn, and manipulate molten glass into a decorative conch shell. It was a fascinating – even magical – process to witness first-hand.

I fell in love with Ludovico Einaudi’s music last fall thanks to the MusicChoice Soundscapes TV channel. And after hemming and hawing for months about which of his albums to get first, I finally decided on his 2006 album Divenire. And, well,… ❤

For anyone who’s not familiar with Einaudi, he’s an Italian pianist and composer who began his career with traditional chamber and orchestral compositions before transitioning to film soundtracks and solo albums. Divenire is one of his solo works. Some songs are just Einaudi on his piano; others bring in an orchestra and/or subtle synthesizers and percussion. So it’s not an over-the-top classical album, but rather one that artfully balances symphonics and minimalism. Not to mention every song on Divenire is gorgeous. The title track, “Oltremare,” “Ritornare,” “Andare,”… but “Primavera” (see the YouTube clip above) is far and away my favorite.

What Made Me Happy in July

Unfortunately the studio where my yoga instructor was teaching closed in June. So while she looks for a new place for her evening classes, I’ve continued my yoga practice with Fightmaster Yoga on YouTube. Led by certified yoga instructor Leslie Fightmaster, these free “classes” range from total-body workouts to concentrations on specific muscle groups and/or types of yoga. So if you want to try yoga or have struggled with maintaining a consistent practice, start with any of Fightmaster’s 30-Day Challenges, with classes ranging from 15 to 30 minutes. And if you’re more experienced or want a longer class, Fightmaster has plenty of intermediate or 45- to 60-minute videos.

Why do I follow Fightmaster Yoga out of the countless yoga teachers who are on YouTube? Well, Leslie’s classes are a lot like my “real-life” teacher’s. She covers both the spiritual and physical aspects of yoga and narrates in an encouraging and gently enthusiastic manner. And since she’s online, she doesn’t turn on the heat! (FYI: I can’t stand hot yoga.) It’s difficult to switch yoga teachers once you find your ideal instruction style. So I appreciate what Leslie is doing and am grateful to have her channel as a back-up during my teacher’s “hiatus.”

After the punch in the gut that was Avengers: Infinity War, there was no way I was going to miss the next couple Marvel films leading up to next year’s fourth Avengers movie. So I knew what my plans would be for Ant-Man and the Wasp’s opening weekend. The only hiccup? I hadn’t actually watched Ant-Man yet. (*gasps*) Thank goodness that OnDemand exists. So I watched both Ant-Man films within a couple days of each other. Yay!

If I had to choose, Ant-Man and the Wasp is my favorite of the two. The first Ant-Man film is good, especially with the heist plot and the hysterical back-and-forth shrinking and enlarging. (Seriously, we need more giant ants and Thomas the Train Engines!) But AMatW brings everything to a higher level. It gives Evangeline Lilly’s Wasp top billing with Paul Rudd’s Ant-Man (and deservedly so). It gives us a sympathetic antagonist with Ghost (she and Black Panther’s Killmonger are now among my favorite MCU “villains”). Best of all, it’s even funnier than the first film. (Giant Helly Kitty Pez dispensers! Driveable Matchbox-size cars! Dysfunctional Ant-Man suits! OH MY!)

Btw, does anyone else think the mid-credits scene is going to be super-important for Avengers 4? 😉

Hands down my favorite tea that I purchased from the Jolie Tea Company during my trip to Salem, MA in May. This fragrant yet delicate blend contains white tea leaves, rose petals, and chrysanthemum blossoms for an elegant, delightful cup. And if you give it a quick sniff, it really does smell like roses (not too strongly, though). It’s my top choice right now if I’m home in the afternoons and evenings (white tea is low in caffeine) or if I want something light and refreshing to offset the hot, humid weather.

What has made you happy recently? Have you gone anywhere interesting or exciting lately? Seen any good movies? Listened to new music that you’d recommend? Also, if you’re a Marvel Cinematic Universe fan, who would you say is your favorite villain(s) / antagonist(s) in the franchise?