Happy Spring, everyone! Who else is looking forward to the weather getting warmer, the flowers to start blooming, and the world to soon turn green and lush and vibrant again? 😀

OK, maybe I was being overexuberant. But spring is my favorite season, after all, and after a super-productive winter on the creative front, I’m looking forward to carrying that momentum into the next season. Plus, I have exciting news to share on two of my writing projects! (No, the current manuscript isn’t done yet, but it’s getting there. *wink*) So, without further ado, let’s dive into this edition of the Creativity Corner.

Winter might not be my favorite season in terms of weather, but WOW was it a productive time for novel-writing. I added over 24,000 words to Storm, so by the end of the season its total word count grew to 88+K. At this rate, I’ll overshoot my goal for a 100K first draft. Then again, my previous manuscript’s first draft was over 132K when I finished it. So it’s par for the course, I guess. (*lol*)

Either way, maybe the first draft might be almost done when I post my next Creativity Corner around the first day of summer? Or maybe even DONE? Let’s call that a “nice-to-have” milestone rather than an actual deadline, though. But the thought of getting closer to finishing this draft sends a rush of adrenaline – and added motivation – through me.

You know what else amazes me about this story’s progress so far? The idea for Storm first came to me around this time last year. Which means that, in one year’s time, I’ve written over 88,000 words of a novel. That’s… just… staggering. To me, at least. With my previous manuscript, it took me over a year and a half to reach the same word count. 😮 I already know a few reasons why Storm is working up faster, though. Maybe I’ll share them in a blog post after the first draft is complete. What do you think?

Aside from progress, I’ve continued doing more research. In addition to having two characters with mental illness (one has anxiety / panic disorder, and the other has depression), a third character (the protagonist’s college roommate) was born in Haiti. Oddly enough, one of my closest friends offline is originally from Haiti and has a stepson (also Haitian) who’s in college. So along with reading articles and watching YouTube videos, I’ve taken up my friend’s offer to ask her questions about Haitian and black culture. She’s been incredibly generous and helpful so far, and I hope I can accurately – and sensitively – reflect what I’ve learned through my character.

Also, my friend and I did a research-related “trip” in February, and I’m planning to talk about it in next week’s What’s Making Me Happy post. Stay tuned for that!

Apart from that… I can’t think of more to say. Except that I’ve shared the main premise of Storm (which you can find here) with more people, including a friend who’s been struggling with stress-related anxiety. And the more I talk about this story with other people, the more… inspired? Encouraged? Empowered? Validated? It’s hard to find the right word that describes how their feedback makes me feel. I just know that every time it happens, the sense of purpose that this story gives me keeps growing stronger.

So here’s the news I hinted at earlier: One of my poems has been accepted for publication!!

I don’t want to share too many details yet, since it will be a few months before the poem makes its print debut. But it’s a piece I’ve been working on since last fall, and its home will be an online literary journal that focuses on nature and environmental poetry. And you bet I’ll share the link here when it’s available!

Along with the acceptance, I’ve submitted new batches of poems to a second literary journal and two contests, as well as consideration for the U35 reading series sponsored by Mass Poetry. I also received rejections for the two submissions I sent over the fall; and while it hurt to get those “no’s,” they gave me the chance to practice the “bounce-back” perspective I blogged about two weeks ago. So now as I’m waiting for more responses, I’ll continue writing, revising, and editing poems, and looking for more places that might be good homes for them.

The plan to take a night off from Storm every 1,000 words to focus on poetry has worked out for the most part. I wrote some new poems over the winter, and revised / edited older ones. I also attended three monthly open mic nights at a local bookstore to read some of my poems. It’s been fantastic to get back into the “performance” swing, but the best part has been meeting other writers and musicians as well as people who appreciate our art. I feel like I’m reconnecting with the local writing community – and who knows what other good that will lead to. 🙂

Btw, if you’re interested in seeing one of my readings, the bookstore live-streamed its most recent open mic night on Facebook. Yay! Click here to watch it (my reading begins around the 1 hour 3 minute mark and goes for 15 minutes). If you have trouble accessing the video, click here instead to “like” An Unlikely Story’s page and then scroll down its feed to find the video on March 22nd. 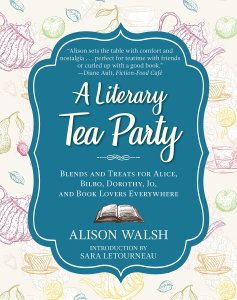 Last fall I shared that Alison Walsh (founder of the food blog Alison’s Wonderland Recipes) invited me to write the introduction to her upcoming cookbook, A Literary Tea Party: Blends and Treats for Alice, Bilbo, Dorothy, Jo, and Book Lovers Everywhere. Well, the cookbook is now available for pre-order! You can find it on Amazon, Barnes & Noble, and Indie Bound, and you can also add it to your Goodreads shelf. (I think ARCs of the cookbook have been circulating, too, but I’m not 100% sure about that.) Alison’s editor was also kind enough to send me a PDF of a recent proof a few weeks ago, and it looks GORGEOUS! I can’t wait to have a final copy in my hands. 😀

I have to admit, though: I was stunned when I saw the latest cover art, and again when I grabbed the Amazon link for this post. Because… um, well, do you see whose name is shown under Alison’s? And whose name is also Amazon-searchable now?

What I’ve Been Listening to While Writing

The playlist for Storm continues to become more varied and more interesting. Here are some of the songs I listened to over the winter while working on the manuscript:

What I’ve Been Reading

Winter was a strange season for reading. I finished 14 books since the year began (including two I sadly DNFed); and while I enjoyed most of what I read, I liked more books than loved them. There were a few standouts, though, and I’ll share them below. Unfortunately I’ve been too pressed for time lately to write reviews at Goodreads. So I’ll do my best to ensure the paragraphs that follow are as persuasive as can be. 😉

Looking Forward to Spring, and Not Just for Creative Reasons

Am I allowed to dance and cheer now that my favorite season is here? (Hey, that rhymes!) The weather here might still be unpredictable for a few more weeks (April snowstorms do happen in Massachusetts – blech), but I swear I feel flowers of joy blooming inside just by thinking about the next couple months. The Massachusetts Poetry Festival in May, more open mic nights, more literary journals that have caught my eye – and, of course, more books to read, and more poems and Storm chapters to write. I’m also looking forward to spending more time outside once the weather improves, and planning more outings with friends or to places I’ve been meaning to visit.

Oh, yes. It’s going to be a wonderful spring. 🙂

How are your writing projects going? What books have you read lately? Or any music artists or albums you’ve been listening to? Finally, what are you looking forward to now that spring is here and the weather will start improving soon?