How’s this for a blog hop challenge? Fellow blogger and writer friend Joanna Maciejewska tagged me on the Three Books for a Desert Island Blog Hop, which she created over the summer. The idea is to choose three books in your collection that you’d bring with you if you had to travel to a deserted island. It’s a neat idea, and a tough one, too – it took me a couple months to figure out which books I’d bring with me! But now I’m ready to share my choices. 🙂

So What Are My Three Desert Island Reads? Here They Are… 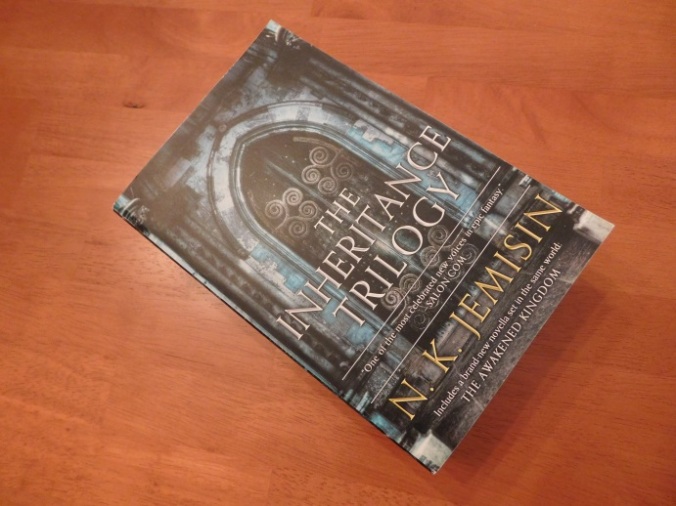 I’m glad Joanna included omnibuses in Rule #2, because that means this beautiful monster of a book could come with me! The omnibus edition of N.K. Jemisin’s debut fantasy series contains all three novels (The Hundred Thousand Kingdoms, The Broken Kingdoms, and The Kingdom of Gods) as well as a companion novella, The Awakened Kingdom. So altogether, this baby is more than 1440 pages long!

I’ve actually read the first two novels, so I only have The Kingdom of Gods and the novella left now. (In fact, I’m hoping to take care of both before the end of this year.) But going to a deserted island would be the perfect opportunity to finish the series and then re-read it later on. Jemisin’s worlds are so intricate, her characters so complex, and her ideas so clever that I’d love to go back to the first two novels if I ever have time.

Another reason why I’d bring the Inheritance Omnibus? Because of this. 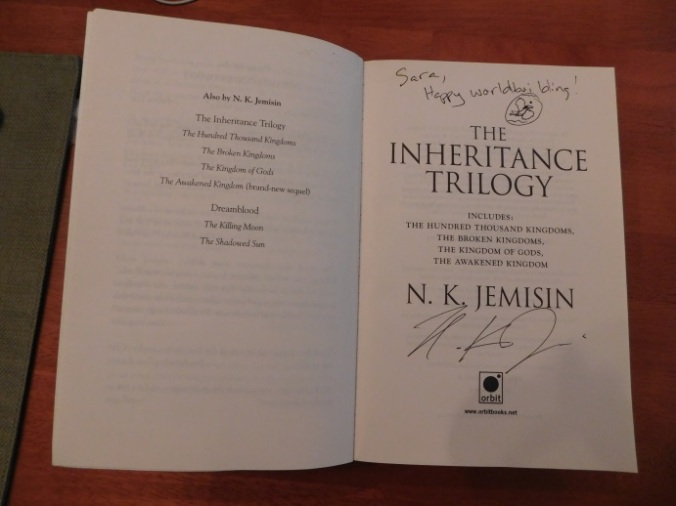 Yes! N.K. Jemisin signed the book for me in 2015. She was teaching a world-building seminar at Writer’s Digest Conference, and though I hadn’t read any of her books by then, I’d heard so much praise for them that I was still thrilled to meet her. So I bought the omnibus at the conference bookstore, then asked her after her seminar if she could sign it. She even sketched a globe with continents and clouds to tie it in with some of her world-building tips (how it’s important to build a fictional world from the ground up, considering geology, geography, climate, etc.). So the Inheritance Omnibus is one of the most treasured books on my shelves, for its stories as well as the the special memory inside. 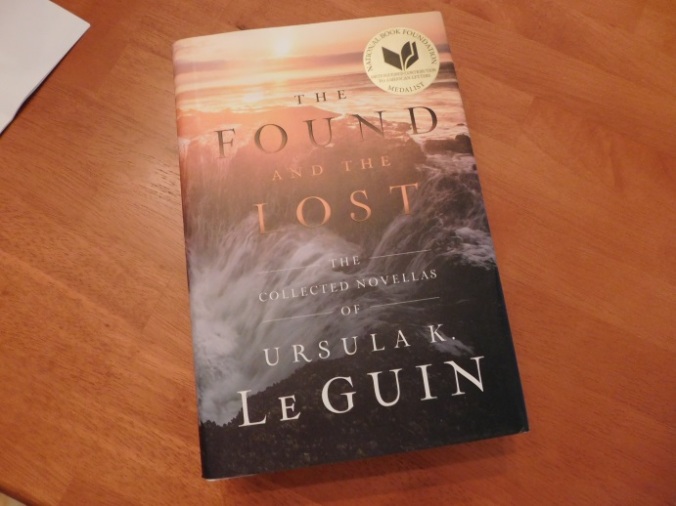 Book #2: The Found and the Lost by Ursula K. Le Guin

I’d feel lost if I didn’t bring a UKLG book with me on such a trip. So I chose The Found and the Lost, a complete volume of Le Guin’s novellas – and a doorstopper of one, too, at 800 pages. (Between this and the Inheritance Omnibus, I may have to look for a bigger suitcase!) Most of the included stories are new to me. The three exceptions are “The Finder,” “Dragonfly,” and “On the High Marsh,” which are also included in Tales from Earthsea. But I have every intention on revisiting them when I finally open The Found and the Lost. Plus, any opportunity to immerse myself in UKLG’s lyrical writing, intricate worlds, and overall imaginative and intelligent storytelling is worthwhile. Then again, Ursula is my favorite author of all time.

Book #3: New and Selected Poems, Volume One by Mary Oliver

Now that I’m back in the poetry swing, I’d also bring a book of poems with me to the deserted island. So why not go with another trusted favorite, Mary Oliver? 🙂

Out of the several chapbooks and collections of hers on my shelves, I’ll go with New and Selected Poems, Volume One. It’s the largest Mary Oliver “book” I own – though at 225 pages, it’s nowhere near as hefty as the Inheritance Omnibus and The Found and the Lost. But it’s a “greatest hits” of sorts, presenting selections from Mary’s first eight book as well as thirty new poems. Altogether, it’s a treasure trove of observations and reflections on nature, gratitude, joy, and the extraordinary in everyday life. Her work is so perceptive, so powerful, and so simply yet beautifully written that it’s impossible to not be moved by it.

Who Else Wants to Join the Three Books for a Desert Island Blog Hop?

My memory’s fuzzy on who I have or haven’t tagged on recent blog hops. So if you think this might be a fun challenge, then go for it! I only ask that you give Joanna credit for inventing this blog hop and link back to both my post and hers.

How about you? What three books would you take with you if you traveled to a deserted island, and why? Have you read any of the books discussed above?