Do you listen to music while you write? Has a specific song or music artist ever influenced one of your stories, poems, etc.? This has happened with a number of my published poems. Thus, Poetry & Song is a limited-run series where I share one of my published poems and the song that “helped me write” it. I also offer insights into why I chose that particular piece of music, as well as any other inspirations for the poem.

After the amazing response to the first Poetry & Song post back in May, I knew I’d have to write another one down the road. Today happens to be a good day for that, because… um, well, September 5th is my birthday. (*blushes*) But that’s all the attention it’s getting. Instead, the joy and gratitude I always feel on this day gives me reason for blogging about “Eve of Spring.”

What? You say spring was five months ago? Who’s counting, though? 😉

Today I’m sharing “Eve of Spring” and the life-changing song I listened to as I wrote it. And together, both pieces were among the saving graces that helped me through one of the most challenging periods in my life.

First, click here to read “Eve of Spring” at the Curry Arts Journal’s website, or here to see a photo of its page in the printed journal. Feel free to keep the tab / window open as you read this post. 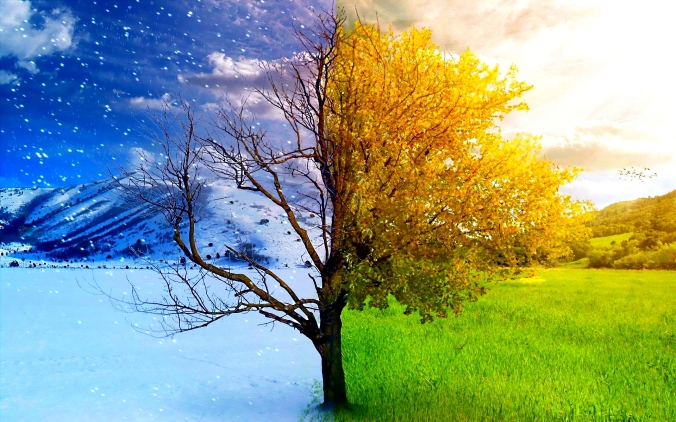 A Winter of Depression, and a Desire to Move Forward

I wrote “Eve of Spring” on the last night of winter in 2012. It wasn’t a coincidence: I purposely chose that night to write a poem about spring, to help me move on from the dark, frightening, and troubling season that had preceded it.

That winter, starting in December 2011, I went through a period of situational depression. Two of my closest friendships at the time fell apart; and despite being surrounded by other people who loved and cared about me, I’d never felt so lonely.

I’d fight the urge to cry all day long. Sometimes I sobbed myself to sleep at night. Very little would cheer me up or make me smile. I’d try to avoid conversations for fear that people would notice I was upset; and when I couldn’t avoid them, I did my best to hide my feelings. Yet even when I isolated myself, I craved connection. It was like I was waiting for people to reach out to me, to ask how I was doing or see if we could get together, even though I couldn’t bring myself to make that effort.

Some of this sounds contradictory, I know. But it was (and still is) difficult to describe my depression in a way that would make sense to everyone. I simply knew how I felt, and it surparssed unhappiness or loneliness. It was like a cloak of darkness and tears, made from a heavy and impenetrable cloth, and I couldn’t shake it off no matter how hard I tried.

I will say, though, that I was never suicidal. In fact, I still functioned normally to a degree. I got out of bed, went to work, visited family, and took care of daily responsiblities. But it was almost robotic, with the belief that I had nothing to look forward to and fearing that things would never get better.

That’s when I realized that I needed help – and the only person who could give myself that help was me.

I told my parents what was going on, and they supported and encouraged my decision to seek therapy. By the end of February, I began visiting a counselor on a weekly basis. It was through those sessions that I learned what I had was likely situational depression (which is typically short term and a result of traumatic life changes such as divorce, retirement, death of a loved one, or other losses), and that I might have experienced other depressive episodes in the past (high school and my freshman year of college).

I can’t pinpoint when I stared feeling consistently happier and more hopeful. It took several months to get to that point. But I do remember when things began turning around. Because not only did I write “Eve of Spring,” on the eve of my favorite season’s return, but an abundance of transformative gifts (for lack of better wording) came my way, including the album I consider my all-time favorite.

Around the time I began seeing my therapist, I received a promo copy of Anathema‘s upcoming album Weather Systems through my freelance work at Sonic Cathedral. I was already a fan of the British prog rock band, so I contacted their PR agency to arrange an interview with one of the singers (which fell through in the end) and downloaded the promo. The latter was, along with seeking therapy, the best decision I made that winter.

Weather Systems, as a whole, is a work of art. The simple lyrics, collaborative vocals (Anathema has two male singers and one female), and richly textured music bed of acoustic, electric, and orchestral sounds make it an intense, aesthetically stunning experience. But when you listen to it often enough, and deeply enough, it reminds you that our lives and emotions are like the weather, constantly shifting from turbulence to calm, from distress to healing, from loss to hope. Some songs cut so close to the bone that you feel the ache. Others have the power to lift you high enough to reach the stars.

“Lighting Song” is one of those uplifting tracks. It starts off gentle and swaying, gradually building as other instruments and Lee Douglas’s vocals drift in, then crashing and colliding with all the power and beauty of a spring rainstorm. And above it all, Lee belts out:

I can’t tell how you many times I cried while listening to “Lightning Song” before I even wrote “Eve of Spring.” At first it was because I wanted so badly to feel the joy and gratitude it exuded. Months later, it still made my cry because I did feel that way, and because of the journey it took to find that feeling again.

And on that last night of winter, I listened to “Lightning Song” so I could write a poem. I wanted to connect my favorite season to the emotions it symbolizes (hope, joy, and renewal / rebirth) through brief but expressive examples from nature. I wanted to voice my desire to move on from the loss and sadness that had held me down for months, so I could be lighter, freer, and optimistic. I wanted to commit myself to positive change – and for a writer, what better what to do that than through writing, and with a song that radiates all of those qualities and intentions playing in the background?

The Rest of the Story Behind “Eve of Spring”

After a few revisions, “Eve of Spring” was published in October 2013 as part of the 40th anniversary edition of the Curry Arts Journal. This particular journal has special meaning to me: It’s the literary magazine for my alma mater Curry College. And for their 40th anniversary, the CAJ staff invited alumni who had been published in the journal as students to submit new work. (I had an essay published there during my freshman year in 2004 and a couple poems during my senior year in 2007.) So when I read the email, I thought, “How can I say ‘no’?”

That October, the CAJ staff also held a reading of the 40th anniversary issue during Curry’s homecoming weekend. My memory of my reading is a little foggy; I’m pretty sure I read “Eve of Spring” and the other two poems that were included. What I remember most, though, were the people who were there: a mix of current students, alumni (my friend Brittany among them), and several teachers, including a few whose classes I’d taken when I was a student. It was such a warm, supportive atmosphere, made all the more energetic as we celebrated not just the journal’s longevity and the writers’ achievements, but the love of the written word in general. And it was great to catch up with people I hadn’t seen in a few years.

Today, I’m deeply proud of “Eve of Spring,” just like I am with all of my published poems. But I’m also profoundly thankful for being inspired and strong enough to write it. It became one of several baby steps forward that helped me recover from that depressive period. Plus, having written that poem, I look forward to the first day of spring with even more delight, anticipation, and gratitude than I did when I was younger. In fact, when I read “Eve of Spring,” a part of me wants to do all the things the poem speaks of – even running through the rain and watching “nature’s madness at work” in the shelter of a gazebo.

And yes, “Lightning Song” still prompts a lump in my throat every time I hear it. 🙂

What memorable experiences have you had with writing while listening to music? Have any songs or compositions “helped you write” a difficult piece of writing (poem, essay, scene for a story, etc.)? Also, what song(s) have cheered you up or changed your perspective on life?