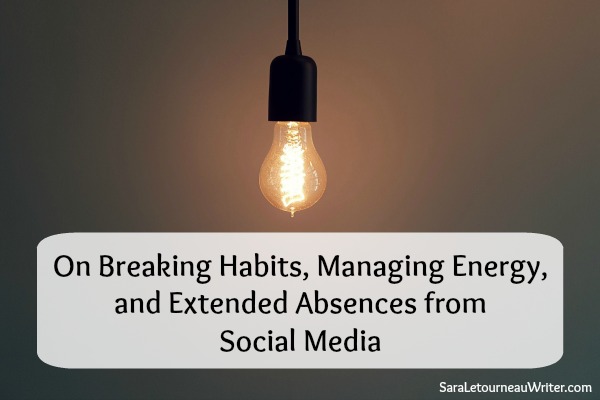 There’s a lot of discussion in the writerly blogosphere about the importance of social media, regardless of whether a writer is published. Much of the advice is valid: Social media is a great way of publicizing your work (books, blog, etc.), networking within the industry, and developing an audience. Personally, I’ve grown to appreciate Twitter, Goodreads, and Pinterest over the past couple years. They’ve either been instrumental with building the blog’s audience and driving more traffic, or helped me connect with other writers, bookworms, and SF&F fans. (In Twitter’s case, it’s been a blessing for both.)

So, why have I been absent from social media lately, apart from Goodreads? It’s not that I’ve given up on it. Rather, the absence began with an intention, then drew on longer for reasons I couldn’t pin down until recently, thanks to a book I’ve been reading and some recent reflection on the “energetic” toll this year has taken on me.

It started in May. I’d been home a few weeks from the Iceland Writers Retreat and finally regained a sense of balance between work, creative writing, and daily life. That is, until I remembered my online photo album, one of the crowdfunding perks for the GoFundMe campaign for my Iceland trip. Which meant I’d yet to choose which photo-sharing site to host the photo album (I eventually picked Flickr), select which photos to share, and start the resizing / uploading / caption-writing process.

Did I mention I took over 300 photos when I was in Iceland? 😮

The only way I could of accommodating the photo-album work into my schedule was by taking a break from all social media except Goodreads. It was a reasonable compromise, since the rest of my daily routine was essential. (Even creative writing. I can’t describe how strange or empty a day is if I don’t make time for writing.) Four weeks later, after squeezing in 15 to 30 minutes most nights, the photo album was done, the selection narrowed down to 100 pictures, and the link sent to donors. So, based on my plan, I now had time to go back onto Twitter, Facebook, and the like after my evening writing sessions.

What I didn’t expect, though, was that when I visited Twitter or Facebook, I realized that… well, I wasn’t interested in being on there. I was forcing myself to use social media when, in reality, I was more motivated to spend that time productively. The only cause for this that made sense was the month-long break I’d taken to work on the photo album.

How Long Does It Take to Create (or Break) a Habit? There’s No Magic Number

Which got me thinking: Doesn’t research suggest that it takes about three weeks (or 21 days) to build a habit? I couldn’t remember where I’d heard or read this before, so I decided to investigate. Lo and behold, it turns out the “21 days to build a habit” idea is more or less a myth.

The idea of a “magic number” with habit-building came in 1960, when cosmetic surgeon Maxwell Maltz published his self-help book Psycho-Cybernetics. In the book’s preface, Maltz states that “it requires a minimum of about 21 days for an old mental image to dissolve and a new one to jell.” He also cites examples such as an amputee’s phantom limb pain persisting for 21 days, and a plastic surgery patient getting used to their new face in roughly the same time. Oddly enough, Maltz offers no clinical evidence to support his theory. But as this article by James Clear goes on to say, that didn’t stop other self-help professionals from jumping on the “21-day” bandwagon, or from giving their own magic number as a threshold for habit-building.

Wellness writer and medical professor Yoni Freedhoff makes a similar point in this post for the U.S. News & World Report. Unconvinced of Maltz’s 21-day claim, the former smoker shared his experience with quitting cold turkey and how he struggled with the urge to light up two to three years later. Freedhoff also did some “habit-building” research and found this 2009 study by the European Journal of Social Psychology that examined the amount of time it took for participants to “automate” new behaviors “carried out daily in the same context” (essentially developing new habits). The study concludes that participants needed anywhere between 18 and 254 days for these behaviors to become automatic.

That’s one heck of a range, isn’t it? Wide enough, in fact, that the idea of using magic numbers or a set amount of time to establish habit-building isn’t just inaccurate. It’s nonsense.

What can help us build new habits then? The desire to make a positive change in our lives, of course. So can perseverance, focus, accountability to ourselves and others, and the ability to manage our time and priorities well. Altogether they’re a winning combination for conscious habit-building. 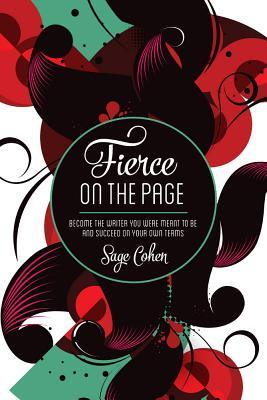 Recently I’ve been reading Sage Cohen’s Fierce on the Page, which is a fantastic resource for writers who are struggling with finding direction, cultivating confidence, or defining success on their own terms. I’m not even 100 pages in yet, but I’ve found chapter after chapter of ideas and tidbits that have resonated with me more deeply than I can say. This includes two particular chapters that focus on habit-building.

In Chapter 2, “Mint Gold,” Cohen suggests that, instead of concentrating on eliminating an undesired behavior, we should turn our gaze to behaviors that already work, then keep track of the choices that reinforce the good behaviors and lead to progress. Filling our time with the more constructive aspects of our writing practice, and seeing evidence of our forward momentum, eventually creates less room for distractions. This focus on encouraging what works can lead to a more fruitful and satisfying writing process – minting gold in our routine, in other words.

Cohen elaborates on these ideas in Chapter 26, “Don’t Smoke a Cigarette While Pushing an Oxygen Tank.” (The chapter title will make sense when you read the book!) Less desirable behaviors become less compelling as they’re crowded out by our focus on (or addition of) ones that align with our true desires. These behaviors can promote accountability, motivation, fun, community, urgency, or compassion – all of which are vital for tending the garden of our practice and making us more productive and intentional writers.

As I read both chapters, I couldn’t help but think of my loss of interest in social media. The half-hour I’d spent each night on the GoFundMe photo album was more energizing and fulfilling than any recent half-hour on Twitter or Facebook. Plus, the activity encourage accountability (my donors were expecting this perk), cultivated deep focus (which my friend Leanne Sowul wrote about for DIY MFA recently), and inspired a little fun (I got to revisit my Iceland trip each time – yay!). I was, in essence, minting gold and relishing it. And once the photo album was done, instead of checking social media, I’d either wonder what else I could accomplish in 30 minutes, or shut down my laptop to fit in more reading time or go to bed early.

Maybe I’m overanalyzing this, and I simply forgot about Twitter or Facebook during those four weeks. But I don’t think that’s entirely true. The itch is still there some days. But once I scratch it by logging on, I’d send a private message or two, then think, “Eh… there are other things I’d much rather do.” It’s really more of a case that my desires evolved over that four-week period, and social media doesn’t alight with them at the moment.

Making Tough Choices for the Sake of Energy Management

Don’t get me wrong about social media, though. I enjoy catching up with friends and family there. I like reading other blogs and staying informed about books, writing and publishing, and all the other awesome things I geek out over. So when I say that social media doesn’t match my current desires, I’m not implying that I’ve chosen to be anti-social on the Internet. Rather, I don’t have the time or energy to invest in it that I used to.

This year has been a rollercoaster for me so far. Without going into detail, I’ve been dealing with stress in various areas of life for several months. As a result, I’ve realized that I’m better off focusing on on balancing creativity and self-care as best as I can. So I’m still writing, blogging, and reading. But I’m also aware of how low my personal energy reserves are, and how it’s more important that ever that I be mindful of how many projects or commitments I have at any time. And one of those commitments is social media.

Yes, it’s a valuable tool for writers. And yes, it’s been effective for promoting my articles and making new friends. But right now, on most days, the thought of checking Twitter or Facebook makes me want to take a nap. Whether you call it “desire,” “motivation,” “energy,” or something else – it’s not there right now, and I know better than to force it.

I’m sure I’m missing out on things because of this. And it wouldn’t surprise me if I’ve slipped off the radar of many of my followers. But we all run into times when we have to make tough but careful choices and take some tasks off our plate, or else we’ll drown in overwhelm. I wouldn’t recommend the latter to anyone.

Most importantly, though, I’m at peace with taking an extended break from social media. It gives me more time I can use productively as well as for self-preservation. And on the nights when I feel the need to journal, meditate, or go to bed early, I don’t question why I skipped Twitter or Facebook. Instead, I’m happy that I’m choosing to nurture myself during a time when I really need it; and I’m grateful that my GoFundMe photo album project was the catalyst for this change, however temporary it may be.

Because I know I’ll return to social media at some point. Though I won’t assign a specific timeframe for it. It’s better, I think, to wait until the ups and downs of the rollercoaster have leveled out, and my energy reserves have replenished somewhat. It’s a realistic, compassionate approach, and I’ll be more thankful for taking that route rather than pushing myself to come back before I’m ready.

If you’re a writer (or even if you’re not) who’s struggling to make time for everything you believe you should be doing right now, please don’t burn yourself out. As much as publishing professionals emphasize how crucial social media is for developing your platform, there’s only so much you can do when you’re unpublished and still working a day job. Do what you can with the time you have; and when life gets crazy, turn your focus away from the tasks that drain you to the ones that sustain you. You need no one’s permission for this – and you’ll feel better for making that choice, and for remembering to take care of yourself.

Have you recently taken a break from something because you don’t have the time or energy? Or discovered you lost interest in an old habit because of other activities or projects you chose to engage in? Feel free to share your experiences with habit-building / -breaking or changing your routine to save your personal energy levels during challenging times.

15 thoughts on “On Breaking Habits, Managing Energy, and Extended Absences from Social Media”