This Sunday, July 9th marks my eighth blogoversary! And based on the results of this recent poll, this year’s celebration is going to be… giveaways! (Many thanks to everyone who voted, btw!) This is perfect, because blogoversaries aren’t just a time of virtual cake, confetti, and fireworks. They’re also a great opportunity to thank readers for their friendship and support, no matter how long they’ve been following you. So, consider this week’s and next week’s posts my gift to you guys. (*bows in gratitude*)

For this first giveaway, I wanted to do something bookish, but something different from the usual “favorite reads or authors of all time” theme. Then I read these recent Top 10 Tuesday posts by Sarah J. Higbee and The Bibliosanctum, and a lightbulb turned on. So, here are Ten Unique Reads I Highly Recommend, along with links to my reviews at Goodreads. At the end you’ll find a Rafflecopter link and instructions for how the giveaway will work. Sounds like a plan, yes? 😀

The Abyss Surrounds Us by Emily Skrutskie (YA Science Fiction) 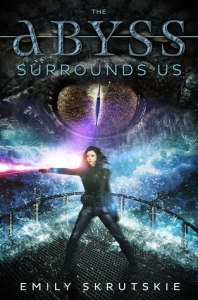 I think all I need to say about why The Abyss Surrounds Us is unique are two words: SEA MONSTERS. But that’s not fair to the book or to you, right? 😉

Emily Skrutskie’s debut novel follows Cas, a teenage Reckoner trainer, as she’s kidnapped by sea pirates during her first solo mission in the Pacific. (Reckoners are the previously mentioned genetically engineered sea monsters.) It’s action-packed and eye-opening, with glimpses into the gritty and morally conflicted world of piracy, a complex f/f romance between Cas and one of her captors, and a sensitive yet honest look at Stockholm syndrome. The worldbuilding is neat, too. Think of a futuristic Earth reshaped by global warming and greatly expanded oceans. And did I mention SEA MONSTERS?? Seriously, Cas’s monster Bao was my favorite thing about the whole book. 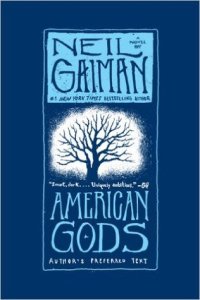 This Neil Gaiman classic poses the question, “When immigrants arrived in America, what happened to the religions and deities they brought with them?” The answer is a dark, gritty, sprawling voyage across the modern-day U.S. and the clash between the gods of old and humanity’s evolved “ideals.” And it’s not exactly Percy Jackson for adults. American Gods is often gruesome, provocative, and terrifying. Yet at the same time, it’s breathtaking, cerebral, and utterly absorbing. Gaiman’s modern-day incarnations of deities from Norse, Slavic, Egyptian, Gaelic, and other cultures and ancient religions are not just spot-on – they’re also complex as living, breathing human beings. Maybe it’s no wonder that American Gods has been adapted for TV. There’s no other book out there quite like it. 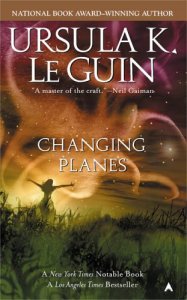 Imagine walking into an airport, bypassing the usual crowds and lines at ticket counters and luggage screenings… and being able to travel to other planets. This is the premise of Ursula K. Le Guin’s Changing Planes, a collection of short stories and vignettes that showcases the depth and brilliance of a master speculative fiction author’s worldbuilding. Think of it as a science fiction travelogue. Each story is devoted to a different planet (or “plane”) and explores its history, landscapes, culture, and people / creatures in first-hand accounts by the fictional narrator or stories she’s heard from fellow travelers. This was actually my first science fiction read by UKLG, and it’s still one of my favorite books by her. It’s so imaginative, richly detailed, and insightful about humanity in general; and since it’s not as well-known as her novels, it’s a fantastic choice for this list. 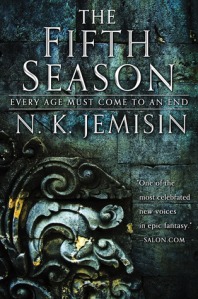 Neither geological events nor people with earth-oriented “magical” powers are necessarily new ideas in fantasy literature. But what if earthquakes, volcanic eruptions, and other catastrophes were the norm? And what if the people who protect the land by preventing such disasters – or can destroy it by creating such events – are shunned by their “power-less” peers? N.K. Jemisin marries both ideas in the Hugo award-winning The Fifth Season, a haunting and intricately woven story of betrayal, heartache, and survival in a doomed world. And those aren’t the only reasons why this book is both outstanding and special. The use of second-person narration for one POV character, inventive fantastical elements such as stone-eaters and floating obelisks, the prevailing sense of oppression and constant threat of apocalypse, the complex mysteries that gradually unfold and then suckerpunch you once you realize the complete picture they’ve painted… I still can’t describe how stunned I was when I finished this book. “Slack-jawed” might even be a better word than “stunned.”

This Monstrous Thing by Mackenzi Lee (YA Steampunk / Alternate History) 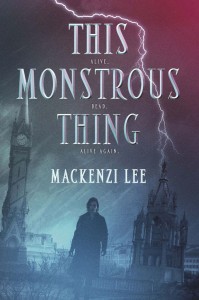 I tend to prefer original stories over retellings, unless something about the retelling’s inspiration or the new spin it offers snares my attention. That was the case with Mackenzi Lee’s This Monstrous Thing, a tribute to Mary Shelley’s Frankenstein that’s set in an alternate 19th century Switzerland. Of course the book’s origins (I did mention Frankenstein, yes?) and steampunk details (mechanics help survivors of the French Revolution and Napoleonic Wars using clockwork and mechanical limbs) ought to grab a speculative or historical fiction fan’s attention. But what’s so refreshing about This Monstrous Thing is its central relationship. Sure, there’s a love story, but it takes a backseat to the tension between two brothers: one who’s alive and torn between ambition and family, and the other forever changed by being brought back from the dead. 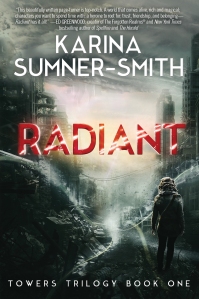 Here’s a book (and a series) that seems to have slipped under the radar of many SF&F readers. Karina Sumner-Smith’s Radiant transports you to a futuristic world of floating Towers where the magical wealthy reside and a crumbling, impoverished city below. Add in ghosts, night-walkers, aircars, and you have a dangerous, breathtaking setting that’s impossible to define genre-wise yet beckoning you to visit its every corner. The story told in Radiant is fascinating as well. In fact, its focal relationship is similar to that in This Monstrous Thing, with two girls – one alive, the other a ghost whose “owner” hasn’t died yet – protecting one another as they’re hunted by rival Towers and trying to survive their treacherous environment. It’s an exhilarating tale of friendship, trust, and belonging, with no romance whatsoever. And while I enjoy a good love story, Radiant is a great example of when it’s not necessary.

When Sabriel’s father goes missing, Sabriel must do more than rescue him. She must also prepare herself for the moment she’ll have to replace him as the Old Kingdom’s Abhorsen, a necromancer who protects the living by ushering passed-on souls to the realm of Death and ensuring they stay there. And so begins Sabriel, the first novel of Garth Nix’s beloved Old Kingdom series. Like several other choices on this list, this book immediately stands out for its worldbuilding. The enduring presence of gore crows, corrupted re-animated souls, and other Dead spirits and creatures injects a vein of horror into Sabriel and its sequels. Necromancy isn’t the only type of magic in the Old Kingdom, either; and the Free and Charter Magic system is just as complex and original as the other. What I enjoyed most about Sabriel, though, is that it’s a coming-of-age story. Sabriel’s father is her only mentor, which means her quest to save him might be the only time Sabriel can put his limited teachings to practice – and then try to figure out the rest along the way. 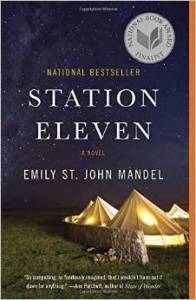 Imagine a not-so-distant future where 99% of Earth’s population has died from an epidemic, and where air travel, electricity, antibiotics, or communication via phone or Internet cease to exist. It’s not so far-fetched, and that’s what makes Emily St. John Mandel’s quietly thoughtful and beautifully written Station Eleven so haunting. Instead of reimagining our world with new government structures and flashes of technology like bestselling dystopian novels have, Station Eleven takes an already-known threat and uses it to bring civilization to a standstill. Or does it? Because as the story moves back and forth in time, readers learn how survivors have adapted since the epidemic and how the relationships, passions, and choices of a person’s past can greatly influence the future of others. I actually finished Station Eleven during my flight home from Iceland this past April, and a chill ran down my spine when I realized the irony of reading this book in that very setting. 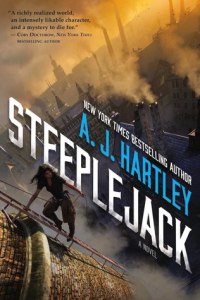 Like Radiant, A.J. Hartley’s Steeplejack isn’t as well-known as some of the other books on this list. But with a single-sentence premise of “YA South African-inspired steampunk murder mystery,” it has more than earned its spot here. This exciting, tightly paced story follows Ang, a young female steeplejack who’s hired to investigate the connections between her apprentice’s murder and the disappearance of one of the city’s most prized artifacts. The plot twists and turns just as a good mystery should; it kept me guessing right up to the shocking climax, and it proves to be an intellectual and emotional challenge for Ang. The worldbuilding in Steeplejack, which is an alternate 19th century South Africa with steampunk technology, is also stellar. With its layers of history, sharply defined social structure, and savanna setting (complete with real-life animals you’d find in Africa’s wilderness), it’s equally realistic and breathtaking. And, the unfolding racial and cultural tensions draw parallels to our own world that make this book too relevant to be ignored. 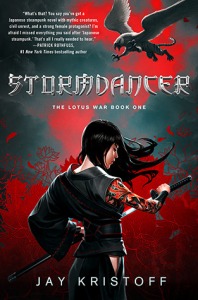 Do you like gryphons? Or airships and other steampunk inventions?  Or dystopian societies where a rebellion threatens to overthrow an oppressive government? Or fictional worlds inspired by Japanese culture and mythology? Jay Kristoff’s Stormdancer, the first book in his Lotus War Trilogy, features ALL OF THOSE THINGS. And that’s not all. By taking the steampunk route, Kristoff illustrates a violent, industrialized country choked by pollution and plagued with illness. This really is a world where every character – not just the protagonist Yukiko, or the great thunder-tiger Buruu – has so much to lose if the rebellion fails. Plus, the bond that blossoms between Yukiko and Buruu is as heartrending and believable as any real-life human-animal relationship, but with added complexity that fits its genre and mature audience.

INTL Giveaway: Win One of These 10 Books via The Book Depository

If any of these books piqued your interest, then you’re in luck! One (1) reader will win their book of choice from my 10 Unique Reads list above via The Book Depository. (Click here to see if your country is on that list.)

This giveaway is international (i.e., open to all countries that TBD ships to) and ends at midnight Eastern time on Thursday, July 20th. Click on the link below to access the Rafflecopter widget, then follow the instructions to earn points for comments, social media, etc. Also, let me know which book you’d like to win in your comment on this post. (You may want to list second and third choices, too, in case your first choice isn’t available.) The winner will have 48 hours to respond to my email and claim their prize.

EDIT – July 20, 2017: The giveaway has ended, and congrats to Mogsy @ The Bibliosanctum! She has won a copy of This Monstrous Thing by Mackenzi Lee.

What are some of the most unique books you’ve read? Have you read any of the books that are featured in this post?