I owe it to myself to do a What’s Making Me Happy post. February was a tough month. Despite the joy of a new writing project and the hope-excitement for the upcoming Iceland trip, it was also a month of stress, fatigue, and a resulting illness. So lately it’s been a challenge to maintain any sense of contentment or confidence in… well, anything, including writing.

But February wasn’t all gray skies, cold temperatures, and pessimism. In fact, several things about the past month did lift my spirits. So today I’d like to celebrate the sounds, sights, flavors, and places that made me happy over the past month. Let’s start with…

Sounds weird, right? Winter is when we typically want hot, stick-to-your-ribs food. And while I love a good stew, grilled sandwich, or other warm dish, my go-to snack (or, rather, “dessert”) at this time of year is oranges.

Why? They’re packed with Vitamin C, which I need more than usual during the winter to help with blood circulation. (I have Raynaud’s syndrome, a hereditary circulation condition that flares up in my hands and feet during the winter.) Plus, after consuming SO much sugar over the Christmas holidays, the citrusy, tart flavor of oranges helps kill my post-holiday candy cravings after dinner – most of the time. 😉

What are my favorite kinds of oranges? These three are particularly yummy:

I Watched “Hidden Figures” and “Lion”

I went to the movies twice this month, for two very different Oscar-nominated films – both of which I highly recommend. 🙂

First up: “Hidden Figures,” a biopic about a team of African-American female mathematicians in the early years of NASA’s space program. I enjoyed every minute, between the delightful cast and the fascinating look at some truly important women and their often-overlooked contributions to America’s history. (I especially loved how Dorothy Vaughan, played by Octavia Spencer, taught herself and her co-workers FORTRAN and became the expert on the research center’s new IBM computer so her group wouldn’t become obsolete.) What touched me most, thought, was the film’s relevancy. In a time when racial tensions still ripple through our country, “Hidden Figures” reminds us that we still have a long way to go toward healing that divide and promoting diversity and equality.

As for “Lion”… Wow. Based on true events, “Lion” follows Saroo Brierly as a 5-year-old boy in India, separated from his family and living on the streets of Calcutta until he’s picked up by a local orphanage and then adopted by an Australian couple. Fast-forward 20 years, when Saroo (now a college student) decides it’s time to find his birth family. Like “Hidden Figures,” this film features an extraordinary cast (especially young Sunny Pawar – he’ll steal your heart) and a story with an ultimately happy ending. But it doesn’t shy away from the harsh truths of child homelessness in India, including abuse in orphanages and the effects it has on young victims. Nor does it gloss over Saroo’s isolation and obsessiveness during his search, and how it affected his relationships with his girlfriend and adopted family. So… yes, it was incredible, but it was also eye-opening and heart-breaking. Bring tissues for this one. 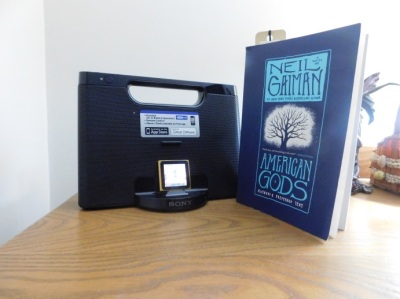 I’ve had this portable iPod speaker / docking station in my bedroom for two months now, and… well, the heading says it all. 🙂 The CD clock radio I’d had since college died before Christmas. So when I mentioned to a co-worker that I was looking for a replacement gadget so I could listen to music in my room, she volunteered her iPod dock to me because she wasn’t using it anymore. (Hence why it’s not really new. *wink*)

And now, I adore the dock. It’s sleek, simply, and super-easy to use. Just pop in the iPod, make sure the dock is plugged in, pick whatever album / artist / playlist you want, and press “Play.” It also has volume buttons, great sound quality, and a handle on top for portability. I’ve used this speaker while reading, yoga / meditation, cleaning – even to play background music during a dinner with friends.

Have you ever bought a music artist’s new album, then spent weeks listening to nothing but their old and new songs? That happened to me recently when I bought Kingfisher Sky’s album Arms of Morpheus. I’ve been a fan of this Dutch progressive rock band for a few years, so it was wonderful to get to know their newer songs and then be inspired to revisit their “oldies.”

It’s hard to describe Kingfisher Sky’s sound. It’s melodic and folky, with a pleasantly experimental blend of heavier rock with acoustic instruments, a classically trained female vocalist, and cello / flute solos. Their lyrics range in inspiration from nature and relationships to Greek mythology and Irish folklore. If you’re a fan of bands like Within Temptation, Anathema, Porcupine Tree, and Blackmore’s Night, then you might like Kingfisher Sky’s music.

If I had to recommend one Kingfisher Sky song, I’d start with “November” (see the above video clip) from their first album Hallway of Dreams. Here are my other favorites by them:

I Visited An Unlikely Story, a Local Indie Bookstore

How much of a travesty is it that this indie bookstore in Plainville, MA (the next town over from me) has been open for 2 years, and up until recently I had NEVER been there? 😮

An Unlikely Story is owned by Jeff Kinney (author of the bestselling Wimpy Kid series for children) and his wife Julie, and it’s absolutely charming. In addition to the bookstore, which sells books in a wide variety of genres, it houses a cafe and a second story (literally) for hosting author events, book clubs, and yoga classes. They also offer a number of kid-friendly activities like storytime, arts and crafts, dance hours, and educational workshops.

My “Unlikely” haul. Have you read any of these books?

I loved Unlikely Story the moment I walked in the front door. The main shop area felt warm and inviting, and it was a joy talking to one of the on-duty booksellers about the shop and how happy I was to finally visit. (She seemed thrilled to hear it!) And of course, I couldn’t help but buy a few books. See the photo on the right.

So, yes, consider me an Unlikely Story patron for years to come. And if you’re ever in the Plainville area (about 30 minutes northeast of Providence, RI and 40 miles southwest of Boston), make sure you visit it, too! 😉

Finally, I’m Grateful For YOU

I’ve said it before in countless posts… But I really appreciate the friends I’ve made in the blogosphere, on social media, and elsewhere in my writing life. Whether it’s been your understanding, encouragement, thoughtfulness, good humor, and excitement over the upcoming Iceland trip (including donor’s responses to receiving their perks – yay!), please know that it makes me smile and feel better every day, good or bad. Thank you for being you, and for being there for me. (*hugs*)

What are some of the things that made you happy in February?