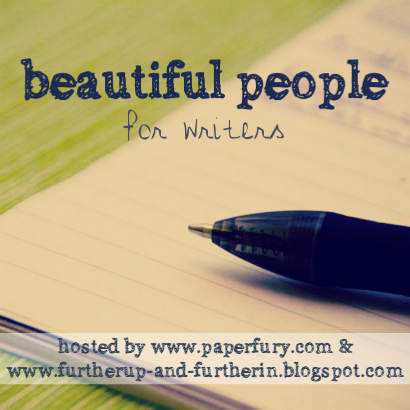 Hmmmm. No official Beautiful People questions has been posted for April yet. So, instead of waiting, I’m borrowing some questions from Morgan Dusky’s recent Character Studies posts and throwing in a few of my own. (FYI – Questions #1 through #8 are Morgan’s, and Questions #9 and #10 are mine.) If any fellow BP writers want to do the same, feel free to do so. Just make sure to credit Morgan and I accordingly, and let us know when your posts go live so we can see your answers.

This month, I’m finally introducing Vandar, the last of Eva’s fellow Councilors. He’s 19 years old, and has blue eyes and black-streaked brown hair. He’s also the Council’s battle / military strategist and their most talented fighter. So, shall we dive in? 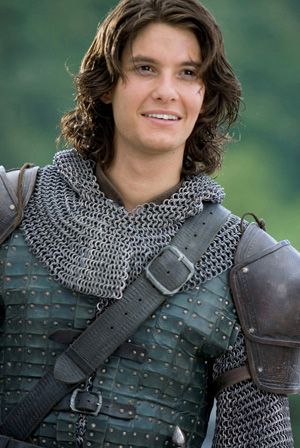 Vandar kind of looks like Ben Barnes from “Prince Caspian,” except he wears a green tunic and brown trousers instead of armor and chainmail.

1. How does Vandar usually enter a room (dramatic entrance, walk in behind somebody so he isn’t noticed, etc.)? How does he usually exit a room?

Vandar would walk in calmly yet confidently. He wouldn’t make a grand entrance or purposely try to grab anyone’s attention. Instead, he’d enter quietly, with long, slow strides, head held high, back straight, and shoulders relaxed. He’d probably leave in a similar fashion, too. If he’s not in a good mood, though, he’ll seem more tense and his lips will twist into a scowl. (Oh yeah, Vandar’s a scowler when he’s not happy!)

2. How would Vandar describe himself in one word?

“Integrity.” It may be a noun, but it’s the word Vandar would use for himself. He’s honest, loyal, and responsible; and he lives by a strong moral code that his father and grandfather instilled in him when he was very young.

3. Choose three other words to describe him.

Ooooh, I get to pick the words this time?? 😀  Here are my three words to describe Vandar:

4. What is Vandar’s foremost physical trait, or the first thing someone will notice about his appearance?

Most likely his wings. Vandar is a Feiri, after all; and it’s hard to miss a massive pair of gossamer wings protruding from between one’s back. Other than that, I’d say either his strong jaw line or sapphire blue eyes. He’s actually the Councilor that the Fei girls fawn over most. (Of course, Vandar doesn’t understand why girls pay him so much attention and finds it rather embarrassing. *lol*)

5. What is Vandar’s physical build? How tall is he?

Vandar stands about 6 feet tall, making him the tallest of the six Councilors. He’s athletic, too, so he’s lean and muscular. Not superhero super-muscular like Thor, though. He’s more like an Aragorn sort of physically fit.

What can I say? I wanted an awesome Aragorn gif. 😀

6. What is Vandar’s favorite outfit? Or, what does he wear most often? Why?

As part of the Council of Selanaan, Vandar wears a uniform of sorts. It’s a green tunic with small golden wings embroidered at the hem, collar, and sleeves; brown trousers; and leather boots. He doesn’t mind the uniform – in fact, he likes it a lot. But if he had to choose a different outfit, he’d probably go for a simple white shirt, a dark-colored vest, and similar trousers and boots to the Council uniform. 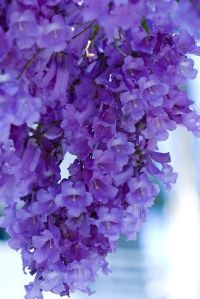 7. If Vandar was a flower, what kind would he be? Why?

Easy. Vandar would pick the jacaranda (pictured above). It’s the national flower of the Fei, matching with their sigil colors of indigo and white, so it’s a fitting choice for a patriotic soul like himself. You can find the jacaranda in our world, too. It’s a flowering tree found in Central and South America, South Africa, and Australia, among other places.

8. What would Vandar do if he was a pirate?

Vandar wouldn’t be a pirate. He’d be the one trying to arrest them! In fact, a few months before TKC begins, the Council was assisting one of the nearby realms with a “pirate crisis” that was impacting trade and the overall safety of Fei’s merchants. (Hence, the need for the Council’s involvement.) Vandar helped develop a naval strategy that brought the pirates under control.

So, yeah. No “yo ho, yo ho, a pirate’s life for me” with Vandar. If he was forced to be a pirate, he would cling to the deck railing because of seasickness. Or, he’d act like Will Turner from Pirates of the Caribbean.

9. If Vandar listened to any music from our world (a.k.a. current-day Earth), who would be his favorite artist / band / singer?

I don’t think Vandar would adjust to Earth’s pop or rock music too well. (*lol*) He’d want to listen to something that closely resembles the music he’s used to at home. So, he’d probably go for African or Native American tribal music. He might also like Dan Gibson’s Native Spirit and Mystic Sky albums, which I wrote about here not too long ago. Here’s one of the songs from Native Spirit below.

10. If Vandar could spend time with anyone who’s dead or alive, who would he choose?

His mother and grandmother. They both died from different illnesses at separate times in Vandar’s life: his mother when he was 2 years old, and his grandmother when he was 15. Vandar has different reasons for choosing them, too. He remembers his grandmother and misses her now and then, but he barely knew his mother. So, Vandar would like the chance to know who she was, apart from the stories his father and grandparents have told him.

That concludes this month’s edition of Beautiful People! What are your thoughts on Vandar? Do you have other questions that can help me / us get to know him better?