Well, February was an… interesting month of reading. It was super-productive (I finished six books – wow!); but out of those six, I enjoyed two, thought two more were OK, and was too disappointed by the other two to review them.

But when you do “market research” projects on certain kinds of novels, you’re bound to read stories that don’t appeal to you as much.

Thankfully the month ended on an upswing, because my Read of the Month was the most recent book I finished. You’ll find out which one it is shortly!

Also, a good chunk of the following books (minus the Read of the Month) focused on romance. Coincidence? Hmmmm….

Read of the Month: The Abyss Surrounds Us by Emily Skrutskie

Pirates, bio-engineered sea monsters, a lawless future on the ocean… Oh yeah. The Abyss Surrounds Us is such a cool book, and I’m really happy I won this from Emily Skrutskie’s Twitter giveaway. (Thanks, Emily!)

Cassandra Leung is a young Reckoner trainer, raising genetically engineered sea monsters (a.k.a. Reckoners) to protect sea vessels from pirates. When disaster strikes during Cas’s first solo mission and she’s captured by the infamous Santa Elena, she’s given an ultimatum: Train a Reckoner pup for Santa Elena’s crew, or be killed. As a result, Cas dives head-first into the rough-and-tumble pirate world, and Skrutskie doesn’t blunt its edges. The violence is bloody at times, and some readers might be turned off by the vulgar language – but hey, we be talkin’ about pirates, matey! Their gritty lifestyle makes Skrutskie’s world more authentic and Cas’s dilemma more harrowing.

What else did I love about The Abyss Surrounds Us? The Reckoners, of course. Bred from animal DNA including snapping turtles, snakes, and lizards, they’re massive, destructive, and oddly lovable. especially Bao. Ethnic and sexual diversity are also well-represented. Cas is Chinese American, and her relationship with female pirate Swift is believable and complex. There’s a hint of Stockholm Syndrome, since Swift is basically Cas’s captor, but we get to see Swift’s human side via secrets and vulnerabilities as well. She also prompts Cas to look at Reckoners from a new perspective and question the morality behind her training, which was really interesting.

At 268 pages, The Abyss Surrounds Us is fast-paced and action-packed, but doesn’t elaborate enough on certain aspects that would have strengthened the story. I wanted to get to know more members of Santa Elena’s crew better, and some of my questions about the world’s history went unanswered. That said, Skrutskie took several risks with Abyss, and they really paid off. This is a fun, gutsy, and imaginative swashbuckler of a tale – and it made me realize that I need more epic sea monster battles in my life. 😀

Other Books I Read in February

Give In To The Feeling / Sarah Zama
Historical Fantasy Noir-Romance / 45 pages (novelette)
Rating: 3.75 out of 5 (Amazon link to come / Goodreads)

NOTE: This will be released as an e-book on March 4, 2016. I received an advance copy from the author, and this has in no way influenced my opinion of the book.

Give In To The Feeling blends the allure of paranormal romance with the sensual, rebellious tone of the Prohibition era. Susie, a Chinese mail-order bride, has been satisfied with her new life in Chicago, working as the lead dancer in her lover Simon’s speakeasy. Then, one night, two strangers arrive – and one of them, Blood, dances with Susie. While Susie feels torn between her attraction to Blood and her loyalty to Simon, she can’t deny what she realizes Blood can offer: A relationship that allows her to express herself freely and make her own life choices. Yet it’s not that simple with Simon. And over several nights, Susie learns that choosing between duty and desire could mean disrupting the spirit world – and courting the fury of a demon she had only heard of in children’s stories.

I tend to skip paranormal romance, but Give In To The Feeling was a spellbinding exception. The presence of spirits and demons instead of other, overused species gives the story an ethereal, horror-tinged tone. Combined with the fun and seductive “Roaring Twenties” setting, this unique fantasy engages the senses and cues the jazz band in your head. And despite the story’s briefness (approx. 18,000 words), there’s enough time to connect with Susie so you can experience her emotions with her, especially her mounting fear toward the end.

I would have liked to have learned more about Blood and his sidekick Michael, though. They seem to have their own otherworldly nature, but it’s never really explained. The writing could have been tightened in spots, too, but that might have been addressed for the final version. All in all, Give In To The Feeling thrilled and captivated me, and I’m eager to see what else Sarah Zama has in store for readers. 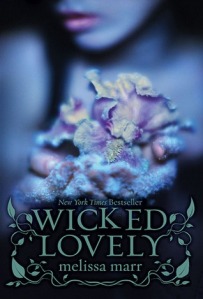 Wicked Lovely was one of those books I didn’t have high expectations for (I wouldn’t have picked it up if it weren’t for my fairy novel “market research” project), but actually wasn’t too bad. It follows Aislinn, a teenage girl who possesses the Sight, the ability to see faeries who are invisible from other humans. Eventually the young Summer King, Keenan, and his Winter Girl companion Donia begin pursuing Aislinn, throwing her into a centuries-old conflict between the Summer and Winter Courts. The only solution: To crown a new Summer Queen who can help Keenan regain his power. Aislinn might be his only hope, but she’s determined not to lose the life she knows. School, her grandmother, her best friend Seth, her own dreams for the future – how can Aislinn sacrifice everything she holds dear for the Fae?

In all honesty, I went into Wicked Lovely prepared for a love triangle and other reasons why I avoid YA paranormal romance. What I found, though, was a dark, alluring tale that embraces gothic and punk rock cultures (body art, clothes / jewelry, hard rock music, etc.). This gave the story a gritty, atmospheric feel unlike other modern fairy stories I’ve read. The main characters were likable for the most part, too. Seth’s tattoos and piercings contrasted his sweet, nurturing persona; and Donia’s once-mortal backstory and divided loyalties made her conflicted and compelling. Keenan, though… *groans* He’s so arrogant and out-of-touch with everyone that I wished someone would slap him (which never happened, unfortunately).

The other issue I had with Wicked Lovely was its predictable plot. Its ending was too convenient, and I wasn’t thrilled when I learned I’d guessed it correctly about 100 pages earlier. Had there been more surprised, I would have given the book a higher rating. But I’m content that Wicked Lovely was at least an interesting read, even if it was a bit gossamery for my taste. 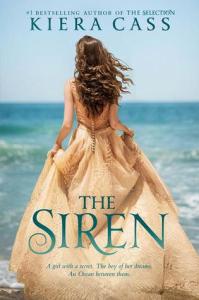 I picked up Kiera Cass’s The Siren to get a head-start on my mermaid novel “market research” project. Despite certain aspects I wasn’t crazy about, this was a fairly decent read.

Kahlen is one of the Sirens, a group of teenage girls who nearly drowned and now serve the Ocean by singing humans to their deaths. Kahlen’s 100-year sentence will end in 20 years; and until then, she’s not allowed to speak to humans (or else her voice will poison them) or engage in relationships with them (either romantic, familial, or platonic). She’s determined to finish her sentence in obedience – until she meets Akinli. Their short time together reminds Kahlen of the freedoms she misses and the one thing she’s always wanted: true love. How can she find a way to follow her heart without breaking the Ocean’s rules – and be forced to leave Akinli forever?

The Siren is primarily a love story, and that part sadly fell flat for me. It’s pretty much “insta-love”; it only takes Kahlen two conversations, several text messages, and one date before she confesses to being in love with Akinli. (Though they had a cake-baking date – and now I want one, too!) I was also annoyed that Akinli was portrayed as the “perfect guy.” There’s nothing wrong with a young male character who’s sweet, kind, and goofy, but he’s not believable if he lacks flaws. So, anything that pertained to the The Siren‘s romance, especially Kahlen’s depression when she and Akinli were separated for a while, got little more than a shrug from me.

BUT. There’s more to The Siren than romance. The siren mythology that Kiera Cass created – how the girls become sirens, the rules they follow, what happens when their sentences end – was enchanting. This led to the Ocean being a character, an entity who’s fearsome yet fiercely loving, selfish yet tender. My favorite relationships, though, were those between Kahlen and her siren sisters. Each girl has a distinct personality and ethnic background; and despite their differences (especially in how they cope with their siren rules and semi-immortality), the girls remain loyal to one another. In fact, The Siren serves more strongly as a tale of friendship and adopted family than a love story. That, along with the fantasy elements, made the book worthwhile in the end.

After seeing the gorgeous cover for its sequel last week, I’ve started reading Rae Carson’s Walk On Earth A Stranger and am really enjoying it so far. After that will most likely be The Wise Man’s Fear by Patrick Rothfuss, though I’m a teensy bit intimidated by its length. I mean, have you SEEN the mass market paperback? It’s 1000 pages long! (*gulp*)