Last summer’s character interview of Eva, the protagonist of my YA fantasy WIP The Keeper’s Curse, was a huge success. I had so much fun answering readers’ questions (and so did Eva *wink*), and the overall response to the interview blew me away. So… anyone game for a second one? 🙂

Our next TKC character interview will be with Aurek Kolsteg, the second most important character after Eva. Like last time, you’ll have an opportunity to ask whatever questions you’d like, and Aurek will answer them. (Of course, it will be me answering in his “voice,” but you get the idea. *lol*)

Instructions for submitting your questions will come after the jump. First, here’s what you need to know about Aurek upfront. 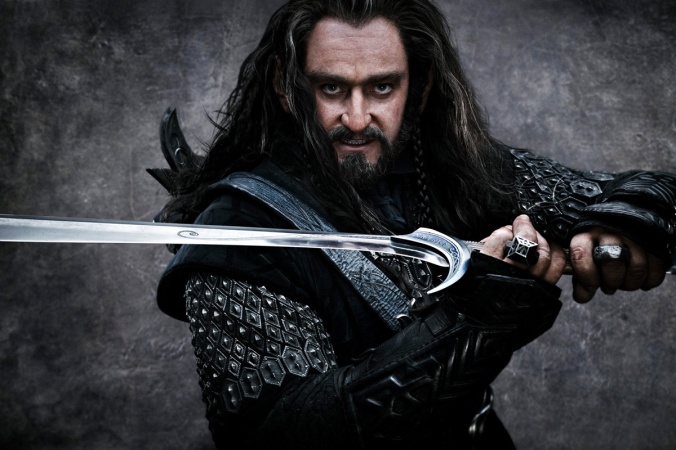 Aurek sort of looks like Thorin Oakenshield, though considerably younger – and taller!

Aurek Kolsteg has endured much in his 24 years. He’s one of the Mountain Folk, a race descended from mortal Humans and the semi-immortal shamans (known as the Saaresgard) of the Deep North. For various reasons, other peoples of the Great Isle have feared and loathed the Mountain Folk; and at different points in history (and depending on where one travels in the Great Isle), the Mountain Folk have been subjected to slavery, persecution, and execution.

Aurek is one of the unfortunate yet fortunate. He was born into slavery on a mining plantation and joined his father Hagen in the hard labor when he turned 10 years old. Hagen died four years later – and on their father’s urgent final words, Aurek and his brother Drasten finally escaped, eventually finding safety in the Suderland capital of Sumanhi.

In the decade that followed, Aurek has become a prominent member of Sumanhi’s Mountain Folk refugee community. (Suderland is allies with the Mountain Folk.) His skills with weaponry (especially his broadsword) and physical strength have made him a valuable asset to Sumanhi’s Queensguard, which the Mountain Folk are encouraged to join. His sense of honor, fairness, and loyalty towards his people have also earned him the title of Lord of the Sumanhi Clan, a title he shares with Drasten. Finally, Aurek is an adept gem-healer, using the magic within Great Isle gemstones to alleviate pain, heal injuries, and so on. (Though Aurek is too humble to call himself even a “good” gem-healer.)

Because of his harsh childhood, Aurek isn’t quick to trust. He comes across as stern and stubborn to keep up his guard. Once his trust is earned, however, Aurek reveals his true self. He’s kind, patient, and thoughtful – an ideal companion to share conversation with over a cup of tea or wine. He loves those he’s close to with every fiber of his being and isn’t afraid to ask for help. Also, despite having no formal education, Aurek has taught himself to read and write, and is knowledgeable about his people’s culture, values, and history through stories his father and other slaves had shared.

In The Keeper’s Curse, Aurek leads a small company of Mountain Men into the Fei forest of Kasialonen. The company is heading north to retrieve relics that once belonged to their people – relics that are believed to be inside a Fei-cursed cavern. He knows that enlisting the help of the Fei’s young diplomats, the Council of Selanaan, could be controversial, even dangerous… and thanks to their spitfire Councilor Isonyeva, Aurek’s decision might prove more perilous than he thought.

Want to submit a question(s) for Aurek’s interview? Leave them in the Comments section below by 11:59 PM Eastern on  Tuesday, February 23rd. The interview will post on Tuesday, March 1st.

23 thoughts on “Submit Your Questions for Aurek’s Character Interview!”