Harvard University Campus (On the Way to BTAF)

After riding the train into Boston, I took the Red Line subway to Harvard Square, the closest stop to Cambridge Public Library. This meant that I’d be walking past Harvard University on my way to the festival. Since the front gates were open to visitors, the late September weather was gorgeous and summery, and I had plenty of time, I treated myself to a stroll through Harvard Yard (a.k.a. Harvard’s main campus). Hey, it’s not every day that you can say you “went” to one of the most prestigious universities in the country for the day, right?  🙂

Here are some of the photos I took inside and outside Harvard Yard: 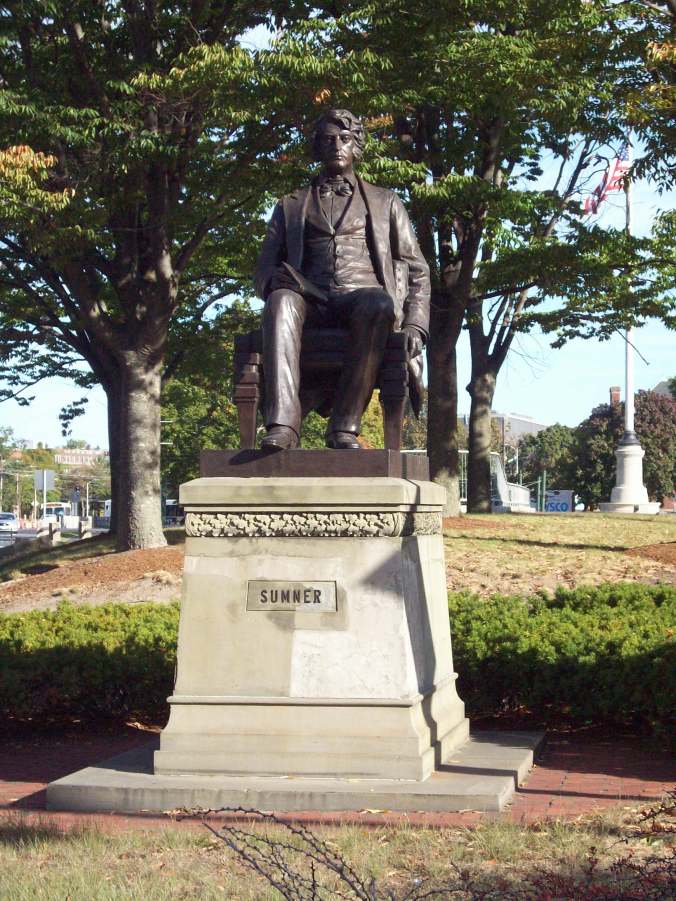 Statue of William H. Sumner, a Harvard graduate who worked in state government and wrote The History of East Boston / Photo taken by Sara Letourneau 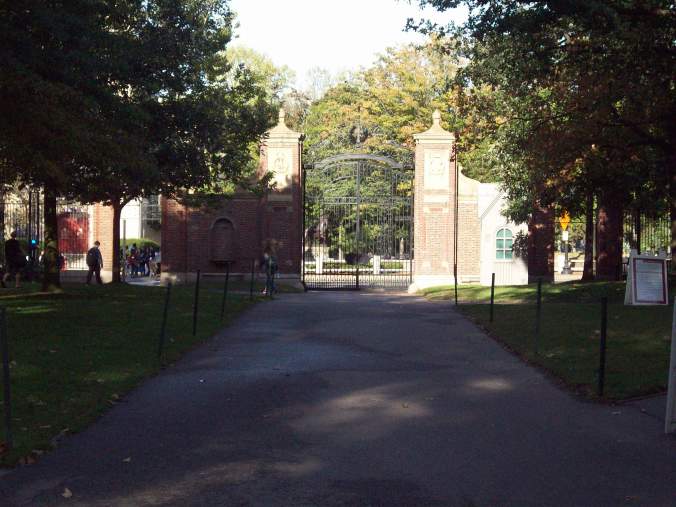 A look back at Harvard’s front gates, from inside campus / Photo taken by Sara Letourneau

A tour stops at the statue of John Harvard, the benefactor after whom Harvard University was named / Photo taken by Sara Letourneau 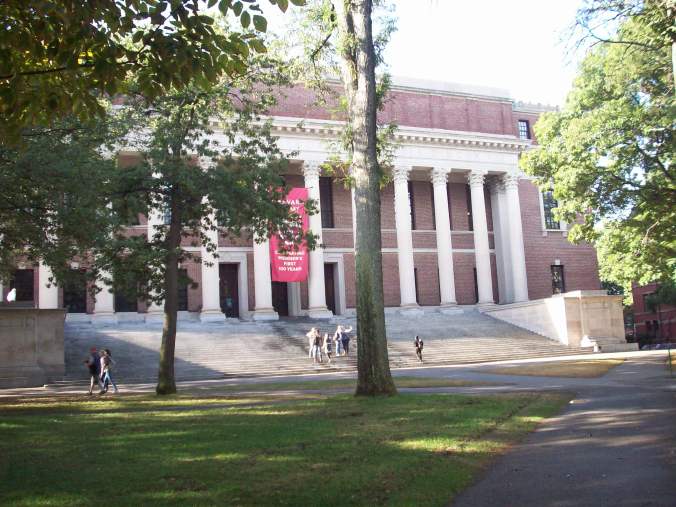 Widener Library, which is celebrating its 100th birthday this year / Photo taken by Sara Letourneau 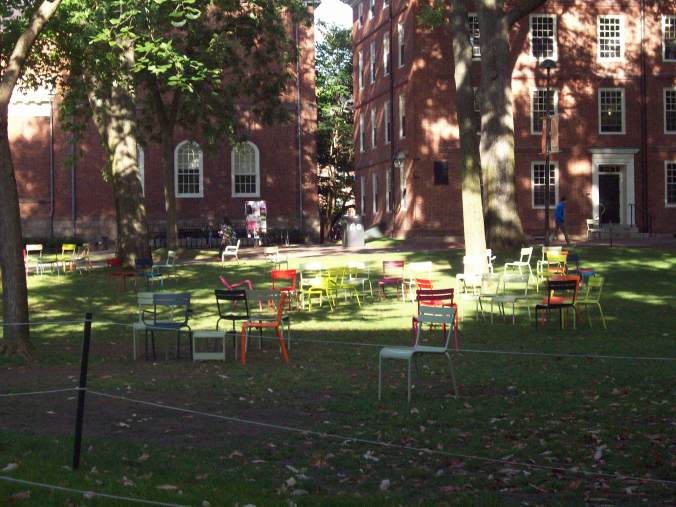 Tercentenary Theatre, the courtyard-quadrangle outside the dorms and academic halls on campus / Photo taken by Sara Letourneau 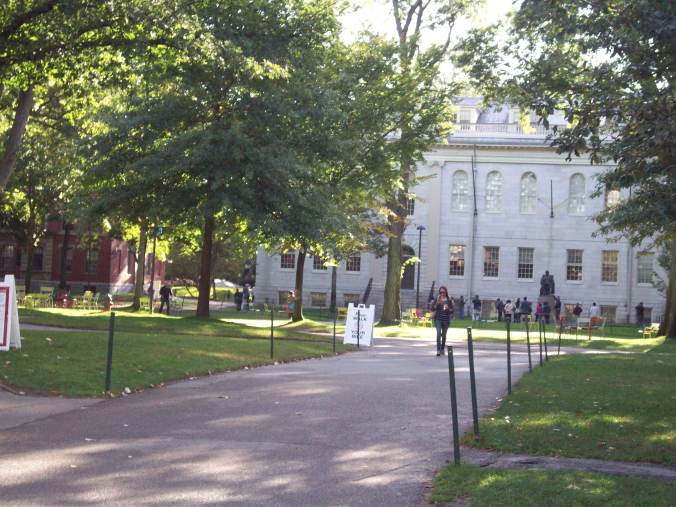 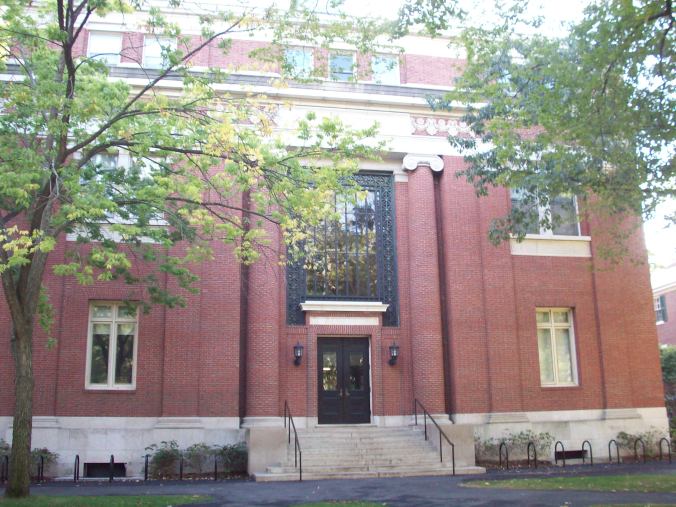 Cambridge Public Library, where BTAF was held, is about a 5-minute walk from Harvard Yard. Like other parts of Boston and Cambridge, the library is a stunning blend of historic with modern. The original, Richardson Romanesque-style building was constructed in 1888 and was added to the National Register of Historic Places in 1982. The addition, highlighted by its glass exterior, opened in November 2009 and more than tripled the library’s original square footage. The interior of both halves is gorgeous, too. The glass “curtain wall” of the addition lets in sheets of natural light, making the area bright, airy, and enticingly welcome to visitors.

Altogether, CPL offers several floors of meeting space, reading rooms for children and teens, and the Cambridge Room, which is dedicated specifically to historical research on the city of Cambridge. Oh, and lots of books, audiobooks, movies, etc., of course. 🙂 Outside, the library grounds are highlighted by a playground, walkways lined with benches, and spans of grassy areas for relaxing, reading, or picnic lunches.

BTAF kicked off its day of events with an intro panel featuring all 28(!!) authors. The host posed several questions for all of the authors had to answer, including:

Since there were way too many answers to share here, let’s just say that this was a fun way to open the festival! But one response that drew a HUGE round of laughs and applause was Renee Ahdieh’s for the “literary pair-up” question – she “shipped” Shahrzad of her debut novel The Wrath and the Dawn with The Darkling of fellow attendee Leigh Bardugo’s Grisha Trilogy. Being familiar with both Renee’s story and Leigh’s books: Oh, do I smell t-r-o-u-b-l-e. (*lol*)

BTAF then split up for morning panel discussions. Of the two, the one that captured my attention was “Inspired By…,” where authors talked about the people, places, and stories that influenced their stories. Here are some of my highlights:

After an hour’s lunch break, BTAF reconvened for two afternoon panels. “The Craft” was an easy choice for me solely because of its line-up. (Um, can you FEEL the YA fantasy oozing from the photo above??) Plus, I love listening to authors and other writers talking about how they approach their work, so the topic itself was a no-brainer.

Some of my favorite moments from The Craft include these: 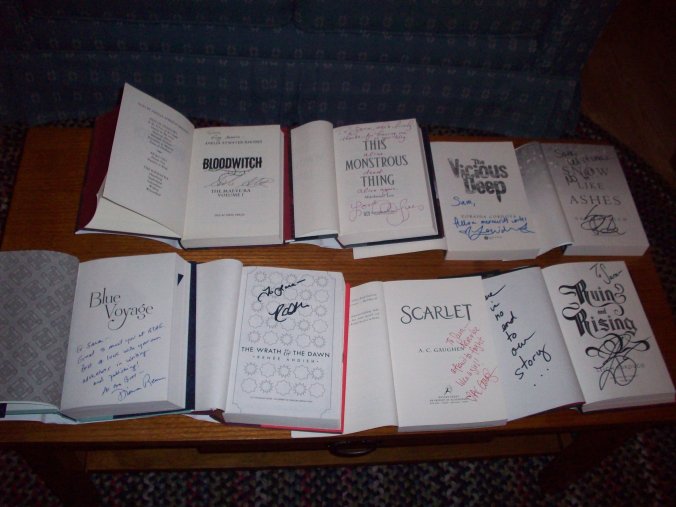 BTAF ended with a 90-minute book-signing with all of the represented authors. Somehow I was able to squeeze in eight authors (seven new books, and one I bought earlier this year) and amass the treasure trove shown above.

I was also able to speak to some of these authors briefly, too. And when a couple of them asked if I was a writer as well and I said “Yes,” they were immensely encouraging. (Thank you, Renee, Zoraida, and Diana!) Also, when it went to Mackenzi Lee’s “booth,” she said she recognized me from our Twitter conversations. 😮 (I guess it helps to have a Twitter photo that looks like you, right?) She also thanked me again for having her recently for a blog interview. 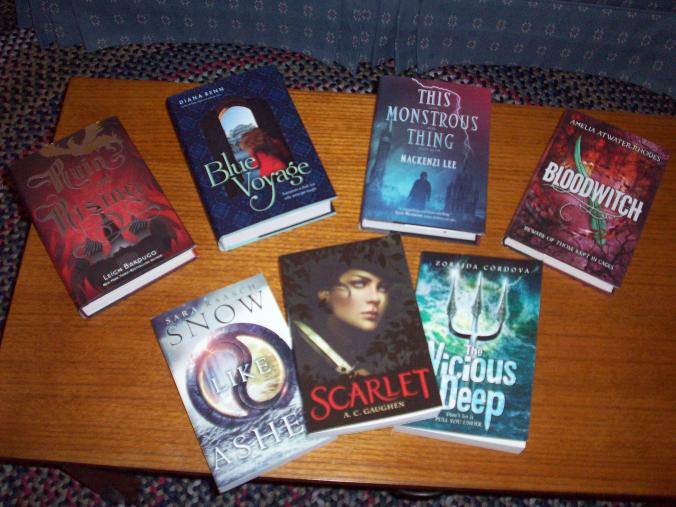 I think the previous sections have sort of explained why I purchased the following books at BTAF. 😉

Finally, courtesy of Porter Square Books, readers were able to pre-order a signed copy of Leigh Bardugo’s Six of Crows during BTAF. I’d given the ARC I read in August to a friend and intended on buying Six of Crows once it was out. So, I was thrilled to have a chance to not only buy one of my favorite books of 2015, but to have it signed by Leigh herself. And what a beeee-auty of a hardcover it is! Can you see the black staining on the page edges if you look at the photo on the right? I don’t think I’ve ever seen that before!

Have you been to any literary events recently? Are there any coming up in your local area that you’re looking forward to? Also, what books did you recently acquire (purchase, borrow, receive for review, etc.) that you’re itching to read?