On the fifth day of each month, 5 on the 5th shares five of something that I like or recommend to readers. Whether it’s five items that share a common theme, or five reasons why I like the topic at hand, this monthly meme gives us an opportunity to talk about other subjects that aren’t normally discussed here at the blog.

Ah, fall. I’m not the biggest fan of this season, but I love many foods that are associated with it: soup, apple cider, pumpkin pie… and black tea! Well, yes, I do drink black tea year-round. But I know other people take a break from it during the warmer months and then come back to it as the nights get cooler and the leaves start to fall. So, what better way to kick off autumn than trying some new black teas? Here are five I highly recommend, along with links in case you feel tempted. 😉

One look at Black Dragon Pearls (known as “Red Dragon Pearls” in China), and you already know it’s unique compared to other black teas. Its leaves are hand-rolled into marble-sized balls, then unfurl when brewed in boiling water. As for the aroma and flavors: Imagine standing in the woods one autumn morning, outside your cottage as smoke wafts out from the chimney. That’s what Black Dragon Pearls smells and tastes like. Fallen leaves, malt, cocoa, and earth, with a slight sweetness and minimal bitterness. I first tried this type of tea last fall, when Teasenz sent me a sample of their Red Dragon Pearls – and began missing it as soon as said sample ran out!

You can purchase Black / Red Dragon Pearls from Adagio Tea, DavidsTea (jasmine scented), Teavana, or Teasenz. (FYI – Teasenz is the cheapest, because it’s coming directly from China and involves no “middle man” like the larger chains do.) You can also check out my full review of Teasenz’s Red Dragon Pearls here. 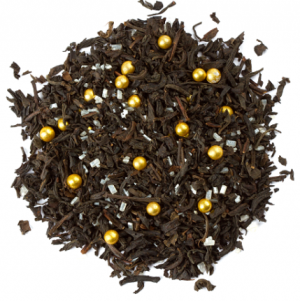 Are chai teas too bold for your tastes? Maybe this will be more to your liking. DavidsTea’s Glitter & Gold blends Chinese black tea with lemon peel, cinnamon, cloves, and two kinds of sugar (clear crystals and golden balls as shown above). I tend to stay away from store-sweetened teas (plus, I prefer my black tea, well, “black”), but Glitter & Gold achieves an even, gentle balance of sugar and spice that warms you from head to toe. Plus, the golden sugar balls cast a sparkling sheen in the liquid when they melt!

FYI – The recipe for Glitter & Gold has been tweaked a little since I last bought the tea (they use golden sugar stars instead of balls now), but the results should be similar.

I’m planning to review a bunch of Whispering Pines teas at A Bibliophile’s Reverie in the future, so I have to reserve some of my enthusiasm for later… But oh my goodness, Golden Orchid is TO DIE FOR. Two Chinese black teas are blended with hand-cut Madagascar vanilla beans that accentuate the leaves’ malt and cocoa flavors and contributes to the liquid’s creamy mouthfeel. It pairs magnificently with dessert pastries or breakfast breads. In fact, the first time I tried this tea was with freshly baked pumpkin bread.  Best. Breakfast. Ever. 😀

Unfortunately, Whispering Pines is currently out of Golden Orchid, but their website allows you to sign up for notifications for when their products are back in stock. 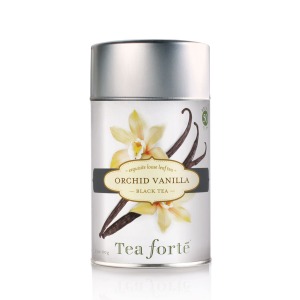 Not to be confused with Whispering Pines’ Golden Orchid above, Tea Forte’s Orchid Vanilla puts a nuanced tropical twist on black tea. It features bits of Madagascar vanilla as well as coconut pieces. Together, both ingredients add a smooth texture and nutty sweetness that turn this tea into an enchantment. I’ve also found that Orchid Vanilla is delicious when blended with other black teas. For example, a 75-25 mix of Orchid Vanilla with Tea Forte’s Bombay Chai marries just enough zest from the chai with Orchid Vanilla’s calmer, more indulgent profile for a truly delectable infusion.

I tried hard to spread the wealth to different tea vendors, but I couldn’t leave out this other cup of fireside warmth from Whispering Pines. And no, there are no snails in this tea. 😉 The name “Golden Snail” comes from the tightly curled leaves with golden tips, or fine leaf buds covered in a distinctive dark-yellow fuzz. The tea may look strange to Yunnan gold newbies, but the fragrance and taste will leave you swooning. Honey, cocoa, molasses, and warm bread – the results are liquid luxury.

If Whispering Pines is out of Yunnan Golden Snail, Adagio Tea’s Yunnan Noir could be a good back-up. Its leaves have the same shape and golden tips; and while the flavor profile sounds a teensy bit different, the other traits sound just like Whispering Pine’s version.

What are some of your favorite black teas? Have you tried any of the teas mentioned above?

15 thoughts on “5 on the 5th: Five Delicious Black Teas to Try This Fall”