Hope you all had a wonderful May! This past month proved to be just as busy – if not even busier – as others have been this year, even with a “stay-cation” halfway through. So let’s get right to the recap, starting with what happened at the blog:

I’m so, SO happy with everyone’s feedback on the site facelift! 😀 😀 Your comments validated what I had hoped to accomplish: a simple, clean, easy to navigate, and appealing website. And I have to admit, it’s exciting to have my own domain. I’m very happy I finally made that investment.

Also, did you notice the new post header for Time Flies? Does the background look familiar? It’s part of the same texture file that’s used in the website header. And you’ll see that continue with other articles series like Chronicling The Craft, Stacking The Shelves, etc. from now on. 🙂 Thank you Stephanie for letting me use your artwork!

A few more cosmetic changes are on the way. Nothing too major, but I hope they’ll add to the visitor’s experience. In the meantime, let me know if you have any comments or questions, especially if you’re having trouble locating pages from Website 1.0.

So, how to describe my month of May? Let’s see… I went to The Muse & The Marketplace on May 1st, then took a week off from work to continue revising The Keeper’s Curse and take a couple day trips to Heritage Gardens and downtown Plymouth. Besides that, I plunked away at TKC on the weekends, finished a beta-reading project for a friend’s science fiction manuscript, wrote tea reviews and other articles, researched options and themes for the website upgrade, read books, worked a full-time job… And that’s still not everything. No wonder I was exhausted by the end of the month. 😦

Yeah. I have a bad habit of taking on or trying to finish too many tasks all at once, and I never seem to learn my lesson. So I need to be a little easier on myself for a while, and focus only on what I truly have time and energy for.

Regarding TKC itself, I’m really pleased with how Draft #2 is coming along. It’s still not perfect (I’d be silly to expect that at this point), but the chapters I’ve revised so far are more on track than they were in Draft #1. The word count has dropped, too. 🙂 I’ll give you more details when I post a Chronicling The Craft article to mark the 20% mark in the manuscript. That should happen around mid-June. 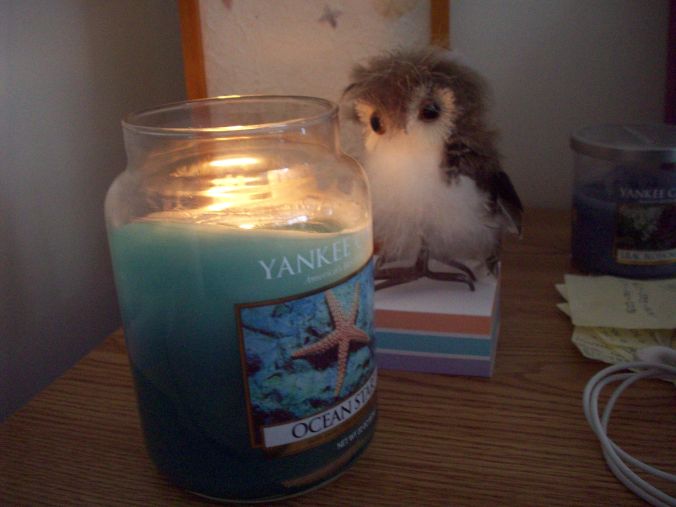 A random photo taken during a recent revising session. Doesn’t the owl look entranced by the candleflame? “OOOOOH PRETTYYYYYY”

May’s insanity might have been augmented by the fact that the only two TV shows I watch – Game of Thrones and Orphan Black – are running new seasons right now. Each is insane in its own way, and I’ve gotten to the point where they tense me up so much that I can’t watch either show during its regular air time. So now I watch Game of Thrones and Orphan Black “on demand” during weekday dinners. A rather appropriate time of day to watch bloody epic fantasy and violent science fiction, wouldn’t you agree? *lol* As much as I love both shows, I’ll be glad when their seasons have finished and I have two less things to make time for each week.

Despite my current bad-luck streak with new movies, I saw “The Avengers: Age of Ultron” during its opening weekend. And… well… It’s not bad, but it’s one of my least favorite Marvel movies. Too much plot crammed into 2 hours and 15-ish minutes, and too many characters vying for screen time. I know this is a precursor to the colossal superhero gathering in “The Avengers: Infinity Wars” Parts 1 and 2 (yes, even Marvel is splitting their films in two parts now *rolls her eyes*), but…  Gosh, if I had a headache by the end of “Age of Ultron” because of the climactic action sequence jumped around from character to character, how am I going to handle more of them the next time around – and the time after that, too?

Song of the Month: “Frozen” by Madonna

This song has been stuck in my head ever since I finished Laini Taylor’s Daughter of Smoke and Bone this past weekend. (Which…. Holy ASKDFJHASJHFAJHA. Can’t wait to review it now. 😀 ) I’m not entirely sure why, but the string arrangements creep into my head whenever I think back on the book’s last few pages. Maybe it’s because Daughter… is bound to stay with me for a long, long time, and “Frozen” has haunted me in its own way, ever since I bought Madonna’s Ray of Light album as a teenager. I’ve always been mesmerized by its ethereal, heart-breaking beauty and its rawness despite the electronica influence. And I have this weird habit of separating music from lyrics and then associating the music alone with emotions or images. It’s… hard to describe in any other way. Maybe it’s best to let you listen and absorb.

The next Time Flies is scheduled for Tuesday, June 30th. Until then, have an awesome month! 🙂