One of the recent Top Ten Tuesday topics sponsored by The Broke and The Bookish was “10 Favorite Literary Heroines.” After reading several lists by bloggers I follow, I thought I’d share my own. Though as you can tell from the title, I couldn’t stop at ten. 🙂

A number of things intrigued me as I worked on this list. Each character’s story, circumstances, personality, and set of struggles is unique. Despite those differences, these heroines share some common traits. See if you can pick out those similarities as you read along. (You might not even need to read the books to figure them out!)

I remember reading Black Star, Bright Dawn when I was 12 or 13, and being riveted by Bright Dawn as she competed in Alaska’s famous and treacherous Iditarod sled dog race. Then I read the book again last year and appreciated Bright Dawn even more. Sure, her survival and hunting skills keep her alive. What’s more important, though, is that Bright Dawn is never tempted by fame or fortune despite the cash prize waiting at the end of the race. Instead, she focuses on caring for her dogs (and keeping the half-wolf Black Star from fighting with the tamer pups) and helping her fellow sledders along the way. She teaches readers that there are more important things in life than winning. 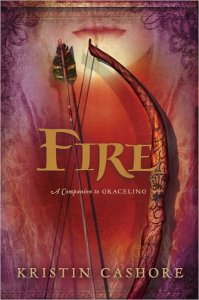 When creating the half-monster Fire, Kristin Cashore turned two all-too-common YA fantasy tropes – jaw-dropping beauty and supernatural talents – on their heads. Fire possesses both traits, inheriting them from her full-blooded monster father. Yet, they make her painfully insecure; they remind Fire of what she is and how her father abused his gifts to take advantage of others. Her evolution is one of “soul metamorphosis,” and one I still remember as clearly as the day I finished Fire. Though she remains empathetic, generous, and conflicted, she grows in confidence and learns to value and love herself – two struggles I can relate to personally. Plus, Fire plays the fiddle. Yay for musician characters!

She might not be the lead character of the Harry Potter books, but Hermoine was instrumental in Harry’s battles against Lord Voldemort. Her eager, studious nature and whip-quick recall of facts make her an A+ student and a reliable resource for whatever wizarding info her friend is looking for. She’s also quick-thinking (especially when it comes to casting spells) and courageous. And while Hermoine usually opts for logic and reason, the few times when she outwardly shows her emotions prove that she’s a young woman who feels, hurts, and loves as fiercely as anyone else does. Oh, and I loved it when she called out Ron and Harry for their idiotic moments. *lol*

Jane Eyre truly was a literary character before her time. Almost 90 years before the next-oldest character on this list was introduced, this young lady caused quite a stir with her desire for independence in a male-dominated world. Jane had good reasons for this, though: She wanted to be viewed as an equal, despite her social standing and gender. What I loved most about Jane, though, was how she stuck with her values, no matter how others tried to persuade her. Even when Mr. Rochester pleads for Jane to stay as his mistress (after Jane learns he’s technically still married), she draws the line between passion and morals – and does what she believes is best for her despite her heartache.

Karana is the original “survivor girl,” arriving decades before other heroines with similar strengths did. Her circumstances, however, are less competitive and equally frightening. Being stranded on an island for 18 years – well, that ought to do a number on your psyche. Karana manages to maintain her sanity during her isolation, though. She hunts, fishes, and makes her own clothes and weapons, all from relying on the island’s natural resources. And even though Karana is the only human on the island for most of the novel, she’s not completely alone. She eventually adopts a wild dog she had planned to kill out of vengeance for her younger brother’s death. Her decision is evidence of her yearning for companionship, and results in one of the most touching human-animal relationships I’ve ever read.

Katniss may be a deadly accurate sharpshooter and fantastic improviser, but she’s also dense, stubborn, and emotionally guarded. In other words, she’s the the perfect reminder that nobody – not ever a trilogy’s protagonist – is perfect. I actually like seeing characters make mistakes, say something hurtful or stupid, or get in trouble. That way, said characters are motivated to redeem themselves later on – and Katniss never seems to miss those opportunities. But if I had to pick more positive reasons for putting Katniss on this list, I’d say it’s for her selflessness and her sense of responsibility. Assuming the role of family breadwinner after her father dies and her mother falls into depression, volunteering to take on the Hunger Games so her sister Prim won’t have to, befriending her youngest competitor and then singing a song to comfort her as she dies… When looking at Katniss in this light, I can’t help but admire her.

In Katsa’s world, some individuals are born with a unique and rare skill known as a Grace. Katsa’s Grace is killing – or so everyone thinks when Graceling begins. It’s no surprise then that Katsa is a truly kick-ass heroine. She threatens, beats up, and (of course) kill with a sword, daggers, even her own bare hands. Does she relish her Grace and love the dirty work her uncle King Randa assigns for her? Not one bit. In fact, Katsa’s shame in her abilities is what humanizes her for the reader. It’s also what makes her so memorable for me personally. Her struggle to see herself as a good person despite the bones she’s broken and the blood she’s shed makes for an incredible story, and leads to her empowering transformation.

OK, yes, “bookworm love” comes into play here. But there’s much more to Liesel than her passion for reading. She’s bright despite her lack of education earlier in life, and a wonderful blend of spunk, kindness, courage, and sensitivity. Everyone who meets Liesel during The Book Thief is profoundly impacted by having her in their life; and as the reader, I clearly saw how. One relationship that will never leave me is her friendship with Max, the young Jewish man whom Liesel’s foster family hid in their basement for two years. She never looks down on him, and she lifts him up in his darkest moments.

My favorite literary rebel! Curious, clever, and mischievous, Lyra Belacqua can be found running all over Jordan College (even along rooftops!) at the beginning of The Golden Compass (a.k.a. Northern Lights), Book #1 of the Dark Materials Trilogy. She grows up quickly, however, when her best friend Roger is kidnapped and she decides to rescue him. How can you not love a little girl who shows that kind of dedication? Lyra’s also not afraid to follow her instincts. Sometimes they’re her salvation; other times, they lead her straight into the thick of things. Yet she never gives up, and can rely on her quick thinking – and her talent for lying – to get her out of trouble.

I had to put the original detective girl on this list. Along with Scott O’Dell’s heroines, Nancy Drew was one of my literary “role models” when I was a teenager. Super-smart and self-possessed, she’s a high school student who refuses to back away from solving even the toughest mysteries – and in the end, she always figures out who’s responsible. Whenever I’d finish a Nancy Drew book, my reaction was usually, “I wish I could do that, too!” There’s nothing more inspiring to a young reader than witnessing the heroine putting her strengths to good use and succeeding with hard work and determination.

Listing Yelena last is an interesting “accident.” She’s sort of an amalgam of several of the other ladies on this list. A skilled fighter and accomplished magician, Yelena is driven, resourceful, and deeply caring toward her loved ones. She’s also unique in two ways. First, she learns the art of poison tasting in the (aptly titled) first Study novel, Poison Study. That’s a whole other level of gutsiness, IMO. Second, while some of the heroines discussed above endured tragic or traumatic childhoods, none were as torturous and painful as Yelena’s. I won’t go into detail here (that’s what reading the book is for *winks*), but as a reader I can safely say that watching Yelena’s growth throughout the Study series, particularly in Poison Study, has been a tremendous reward. She has put the past behind her, found her soulmate and life purpose, and become stronger for it.

Who are some of your favorite literary heroines, and why? Share your picks by commenting below.