I’m starting to think I have a book-buying problem. Any time I go into a bookstore, I see something that’s on my wishlist, and I must buy it then and there. For example, I went with a friend to Barnes & Noble recently because she was looking for a particular book. Guess who left with the larger purchase? *points to herself*

This edition of Stacking The Shelves contains the books I bought at B&N, plus a recent giveaway win (yay!) and some perks from a self-published author’s Kickstarter campaign. Take a look! 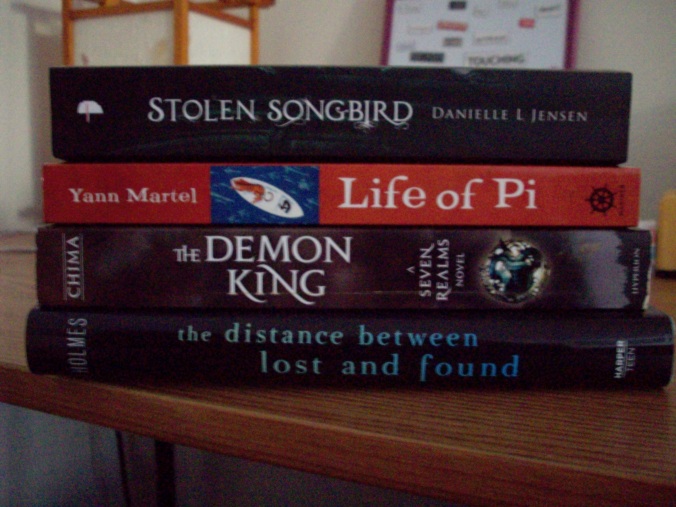 Stolen Songbird (The Malediction Trilogy, Book #1) by Danielle L. Jensen (YA High Fantasy): I recently won this book through a giveaway at Books, Bones & Buffy. (Thanks, Tammy!) Stolen Songbird appeared on several Best of 2014 lists for YA fantasy, so I was wondering what I was missing out on. The next book, Hidden Huntress, comes out this summer, so I’ll see if I can squeeze in Stolen Songbird before then.

Life of Pi by Yann Martel (Literary Fiction / Magical Realism): I saw the film “Life of Pi” on HBO a year or two ago and really enjoyed it. That was before I found out that Life of Pi was originally a novel. So, naturally, I decided I wanted to check out the book, too. Currently this isn’t high on my list of reading priorities, but I’m glad I’ve got in my pile for when it’s time.

The Distance Between Lost and Found by Kathryn Holmes (YA Contemporary Fiction): I like a good contemporary novel every now and then, regardless of whether it’s aimed for the adult or YA crowd. And after listening to Kathryn’s recent podcast at DIY MFA, I was convinced I should read The Distance Between Lost and Found. I’m reading this book right now, and so far I love it. Keep an eye out for a review in the next week or two. 😉

November Fox by E.E. Bertram (Science Fiction / New Age): I met Esther (E.E. Bertram) via Twitter last year, just as she was preparing to launch a Kickstarter campaign to fund her “fusion media” project for November Fox. By “fusion media,” I mean a truly ambitious scope: a print book, an interactive e-book, a music album, and other goodies. The campaign was a success in the end, and the perks arrived last week! The book is HUGE – not in terms of page count (about 250-ish pages), but it’s a very tall hardcover with glossy paper and (if I’m not mistaken) pictures / images. From what I gathered on Esther’s campaign summary, November Fox follows the outer space adventures of an orphan musician who’s also an animal lover and vegan. Esther described the novel as Alice In Wonderland meets The Matrix. Sounds pretty neat, if you ask me!

The other perks pictured above are a couple posters and download cards for the November Fox music album on CD Baby.

What books did you recently buy or acquire? Have you read of the books shown / discussed above? Feel free to share your opinions and most recent hauls by commenting below.

Go ahead, my friend. Choose a rose for yourself. You deserve it, after all. 🌹❤
One of my writers is working on a fiction novel featuring Bigfoot. So I took up a friend's recommendation and borrowed Max Brooks's DEVOLUTION from my local library. I'm not a big fan of horror stories, but this was an entertaining read. 👣😳📚
New podcast interview! I talked with Rachael at Wicked Writers recently about poetry, editing, inspiration, and the joy I get out of my own writing as well as helping other writers with theirs. I also read "Origin Story," one of my poems, at the end. The link is in my bio. Hope you enjoy listening to it! 🎙📖✍