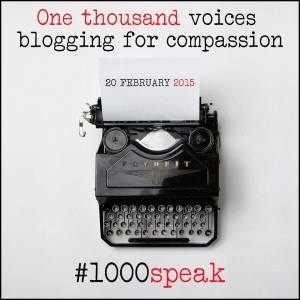 A couple weeks ago, I learned about 1000 Voices for Compassion from Sara Litchfield. The main goal of this blog movement was impressive: inspiring 1000 bloggers (or more) to post articles about compassion on a set day in February. The key word for me, however, was “compassion.” It stuck with me for days after I read Sara’s article. I kept thinking not only about the word’s meaning, but also the goodness I’ve witnessed, the kindness I’ve given to others or received from others, the impact such acts have on the world – and, in some ways, how much the world needs them more than ever.

Late last week, I decided to join 1000 Voices for Compassion. I’m still not sure what I’ll focus on for the big day (February 20th). I keep seesawing between ideas; I want to write something meaningful, yet nothing feels quite right yet… What I do know, though, is why I want to participate.

Simply put, I love the purpose of 1000 Voices for Compassion. If you think about it, sometimes it seems like the violence and hatred of the world overshadows the good. Unrest between police officers and the African-American population in the United States. The terrorist shootings at Charlie Hebdo in Paris last month. The murders of Pakistani school children not long before that. Here in the Boston area, we’re preparing to revisit the Boston Marathon bombings of 2013 now that the surviving suspect’s trial is about to begin. Raw sadness still tears at me whenever I think about how many innocent victims suffered such horrific injuries that day. My nerves still rattle when I recall the following Friday’s manhunt, and how the day’s events left me fearing for the safety of my brother and a close friend.

However, what often follows events like these? An outpouring of love in all its forms. Donation campaigns, peaceful rallies, a ripple effect of awareness across the blogosphere – the list goes on. In my opinion, the most important aspect of compassion is the results from those actions. It allows us to help and heal. It urges us to forgive and care for others as well as ourselves. It lets us make unexpected connections and forge life-changing bonds. It reminds us of what it means to be human. I can’t think of a better reason to try to be a more compassionate person.

Also, creatively speaking, synchronicity has played a part in my involvement with 1000 Voices. The fantasy novel I’m currently working on explores compassion, forgiveness, and vengeance on both cultural and interpersonal levels. I didn’t consciously choose those themes. Rather, they grew organically out of the story I wanted to tell. And with all the craziness going on in the real world, we could use more stories – both fiction and non-fiction – that offer examples of compassion and its impact on characters.

When I was in 6th grade, one of my English class’s assignments was to write our own autobiography. One of the questions we had to answer was, “How do you see yourself contributing to society as an adult?” A mind-blogging question to ask of a 12- or 13-year-old, right? However, I was able to give an honest answer then, and my answer today would be no different: I want my writings to be my contribution to society. It doesn’t matter to me if it happens through novels, poetry, or blogging. If I’m able to make even a small difference in the world because of my writing, then I’ve done my part. 1000 Voices of Compassion is another avenue to do just that. How about you?

12 thoughts on “Joining 1000 Voices for Compassion”