Your WIP’s Characters and Their Myers-Briggs Personality Types

“Chronicling The Craft” is an article series where I share my experience with writing my current work-in-progress (WIP), which is a fantasy novel. Every 5,000 words, I let readers know what I’ve accomplished since the previous article and share advice, discoveries, techniques, etc. Besides the word count in each article title, a “chapter ticker” at the top also tracks my progress as I use the skip-around / “writercopter” method to write the novel. Today’s installment celebrates the book reaching 105,000 and 110,000 words in length.

We’ve hit the home stretch now! I’m itching with excitement and impatience now that the first draft is getting closer to THE END. Half of me wishes I was already there at the finish line, done and ready to collapse creatively speaking. That’s when the other half of me chimes in, “Not yet, Sara! Be patient.” It’s a very fine tightrope to walk, but I have to keep at it for now.

I took work-related time off around Christmas and New Year’s to relax and (among other things) work on the book. That “mini writing vacation” helped me pass not just one word-count milestone, but two! So, for brevity’s sake, I’ll give a general overview of my progress since early December:

I was struggling with topic ideas for this Chronicle when I recalled a graphic that popped up in my Facebook news feed last year: The Lord Of The Rings Personality Type Chart. It had grabbed my attention then, especially since I knew my Myers-Briggs Type Indicator® (MBTI) personality type and was curious to see which character I’d match up with. After I remembered this chart, I said to myself, “Hmmmm… I wonder what my protagonist’s personality type would be.” That’s the question I’ll answer in this Chronicle.

Let me clarify one thing first: Using MBTI personality types is one possible method for creating characters. However, it’s not the only way. I built mine “from the ground up,” figuring out their backstory and (particularly for Eva, the protagonist) emotional wounds, then choosing attributes and flaws that made them well-rounded and believable. Now that I’ve lived with Eva and the other characters long enough to know how they think and act, I’m curious to see where they’d fall on the MBTI spectrum.

Now, here’s the LOTR Personality Types chart I was talking about. A few choices are debatable, but I think it’s accurate for the most part. (NOTE: Click the image to see a larger version for reading purposes.)

You can also find personality type charts online for characters from other book series, movies, and TV shows. My two personal favorites besides LOTR are Harry Potter and Star Wars.

Wait – What Do Those Letters Stand For?

Each letter represents one of eight preferences based on behaviors and thought processes. Rather than explain each preference in detail (that in itself could be a long article!), I’ll list them here with links to pages that explain the differences between the opposing preferences:

Before determining your characters’ personality types, it’s a good idea to be familiar with your own. That’s why I’m including a brief section about myself here, and the LOTR character who matches my personality type.

Awwww! I’ve always adored Sam for his loyalty to Frodo and his attentiveness to his friend’s needs as they journeyed to Mordor. However, I’d never considered how similar we are until I found the above chart. We’re both empathetic, patient, shy, and dedicated to the people and causes I care about. On the flipside, we tend to downplay our successes and can be so catering to others’ needs that we often neglect our own. ISFJs also have difficulty sharing feelings or opinions that conflicts with those of other people. Quite often I won’t disagree or say “no” if I’m afraid doing so will cause turbulence in the relationship.

Funny thing is, I look at my MBTI profile and realize I’ve grown since the last time I read it. Certain life events and personal challenges have taught me to be more open to my weaker preferences (Intuiting, Thinking, and Perceiving). I’m still an ISFJ and most likely will stay that way, but I can see how I’ve changed in some ways.

The Personality Types of Three of My WIP’s Characters

For this section, I’ll use Eva and two of the most important or pivotal “supporting” characters as examples. I’ll share what I believe is their MBTI personality type, explain how I figured it out, and briefly share anything else that comes to mind. I’ll also pair each of my characters with the LOTR character sharing their results, starting with…

Who Is She?: Eva is the WIP’s protagonist, a young Faerie woman and the Council of Selanaan’s chief navigator (and only female member). When the Council is enlisted to join a band of Mountain Folk on a diplomatic mission, she’s forced to confront a long-kept secret – vengeance for the deaths of her parents when she was 5 years old.

The Breakdown: Eva’s two “end” letters were easy to figure out. Even though she collaborates well with her fellow Councilors, she values her “alone” time and does her best work either alone or in a smaller group (I). Her adaptability in dangerous or fast-moving situations allows her to come up with creative, “on-the-fly” spells that often resolve the issue at hand; and she isn’t afraid to bend rules to do what needs to be done (P).

The two middle letters required more thought. I ended up with Thinking (T) because Eva bases her choices on facts and logic, not on others’ thoughts or opinions; and she values truth over tact. Sensing and Intuiting was a toss-up. As the Council’s navigation expert, Eva relies on facts, details, and memory to perform her role, yet she’s not opposed to new ideas or trying something she hasn’t done before. When I read the descriptions for ISTP and INTP, though, I knew ISTP was a better fit because Eva’s more of a doer (ISTP) than a contemplator (INTP).

And it suits her better than I’d expected. ISTPs tend to be adventurous, resourceful, loyal to their loved ones and their personal values, and skilled with manual tools such as weapons – all of which describes Eva. ISTPs can also be stubborn and blunt, and can have nasty tempers that lead to physical rage. (OHHHH yes, that’s Eva!) Interestingly, a number of sites say that only 2% of women are ISTPs, and those who are have difficulty fitting into typical gender roles. That’s Eva through and through, once again. No wonder she feels out of place in her world, as Eowyn did.

Who Is He?: Lord Aurek Svestaren is the leader of Eva’s travel party and her eventual love interest. It’s worth noting that Aurek belongs to the Mountain Folk, a race of Humans who fled to mountainous areas centuries earlier to avoid persecution for their longevity and subtle healing magic.

The Breakdown: INFJs are known as quiet Extraverts, and Aurek fits that description. He easily connects with most of his fellow travelers and speaks more on human terms than with logic (F), yet he’s like Eva in that he needs his space at the end of the day (I). He’s driven by a desire to improve the well-being of his people (N), but he’s more than just a dreamer. Rather, he and his brother Drasten have crafted their mission carefully, taking the necessary steps to plan their journey north – even deciding well ahead of leaving that they’d need to detour to the Faeries’ kingdom and enlist the Council’s help (J).

I’m not surprised Aurek turned out to be an INFJ. He’s warm, caring, decisive, and complex. (The latter might explain why it took me a while to pin down his MBTI type, though not nearly as long as it did with Eva.) His personality contradicts his soldier background, but apart from cultural expectations (younger Mountain Men are raised to be warriors) I think Aurek viewed this trajectory as a way of helping his people and realizing his long-term goals. Aurek also exhibits INFJ flaws such as intense privacy, stubbornness about following his instincts, and agitation when his motives or values are questioned.

According to multiple sources, INFJs are the rarest personality type in society, and the least common among men. Go figure, right?

By the way, did you notice that the only letter Aurek and Eva have in common is their leading “I”? Theoretically, this means they’ll have difficulty getting along – which is absolutely what happens when they first meet. *laughs* Well, they have cultural reasons for disliking each other, too, but their personalities make it even more challenging. However, the story will give them opportunities to see the good – and the worst – in each other, and will present learning opportunities for both characters, especially for Eva. 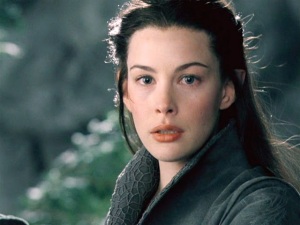 Gidion’s Personality Type: ENFP – The Inspirer (Arwen) (Not sure if I agree that Arwen’s an extravert, but that’s besides the point here)

Who Is He?: Gidion is a male Faerie and the Captain of the Council of Selanaan. He’s also Eva’s cousin and a sort of “adopted” brother who helped cared and stand up for her after Eva’s parents were killed.

The Breakdown: Like Aurek, Gidion’s a humanitarian at heart, focusing on ideas and possibilities (N) and placing an emphasis on people and relationships (F). Combined with his strong social skills and infectious enthusiasm (E), he’s a great fit for his roles as the Council’s leader and chief mediator. However, despite his energetic presence, Gidion knows how and when to relax. His open-mindedness and spontaneity (P) make him fun and interesting to be around.

Everything I’ve read about ENFPs matches Gidion well. Curious, cooperative, empathetic – they’re all words I’d use to describe him, and all common traits for his personality type. Gidion also views his leadership role within the Council as an ENFP would. His priorities are building relationships, working alongside his subordinates instead of delegating, and maintaining peace within the group. Also, like most ENFPs, Gidion’s more of an idea-generator than a doer. He tends to overlook details and needs help from his fellow Councilors to execute his ideas. He can also be easily taken advantage of by characters with less-than-honorable intentions. Maybe that’s why Eva keeps an eye out on him…

What intrigues me most about Gidion’s personality type is how his function pair (“NF”) is the opposite of Eva’s (“ST”). Generally, this means that their personalities clash and they’d find it hard to relate to one another. However, these two characters have known each other their entire lives. Not only are they cousins, but they’re practically siblings because Gidion’s family adopted Eva after her parents were killed. They’ve had years to get used to each other’s temperaments, and that’s evident in their interactions in the WIP. It’s also why I have hope that things will work out between Aurek (who’s an “NF” like Gidion) and Eva: She has experience dealing with NFs because of her relationship with Gidion.

*whew* I hope I didn’t cram in too much information for you. If I didn’t and you’d like to read more about MBTI personality types, here are some links:

Next Chronicle: When the WIP reaches 115,000 words