I’m taking a quick break from my mini “writing vacation” to share this year’s Christmas book haul! Most of the books were on my wishlist, while a couple others were neat surprises. Here they are! 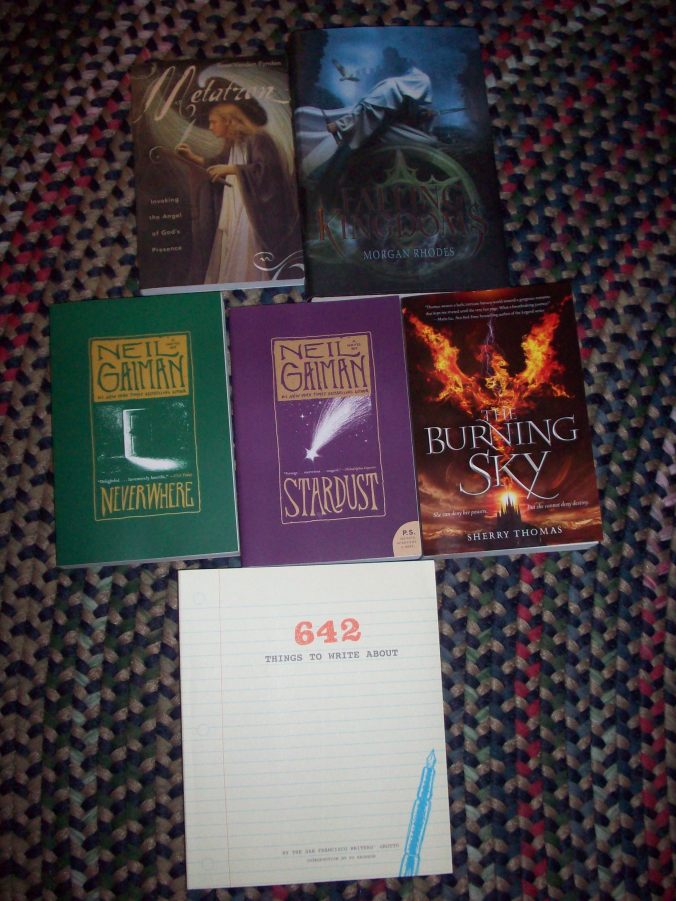 Metatron: Invoking The Angel Of God’s Presence by Rose Vanden Eynden (Spirituality): One of the two surprise gifts. A friend found this book at a new age store and said she immediately thought of me. Now, I don’t write much about my spiritual beliefs on this blog… but Metatron is an archangel whom I’ve developed a special connection with over the past year. I’ve fallen out of my “communication” habit the past couple months (two words: holiday insanity), so this book could be a great way to reconnect with Metatron.

Falling Kingdoms (Falling Kingdoms, Book #1) by Morgan Rhodes (YA Epic Fantasy): OOOOOOOOOH. This sounds like the YA version of George R.R. Martin’s Song Of Ice And Fire saga. Multiple POV characters (at least three, from the looks of the jacket copy) and the promise of political intrigue, romance, and death. Muahahahaha!

Neverwhere (Contemporary Fantasy) and Stardust (Fantasy) by Neil Gaiman: I really enjoyed The Ocean At The End Of The Lane this past summer, so now I want to catch up with Neil’s previous works. American Gods was also on my list, but these two should tide me over for the time being.

The Burning Sky (Elemental Trilogy, Book #1) by Sherry Thomas (YA Fantasy): I’d be lying if I said Burning Sky‘s cover wasn’t one of the reasons why I wanted to read it. Isn’t it gorgeous?! It reminds me of a phoenix rising from the ashes. And like I mentioned in this article from November, I’m interested in reading more fantasy stories dealing with elemental magic. Very excited about this gift, and I hope to read it sometime in 2015.

642 Things To Write About by San Francisco Writers’ Grotto (Writing / Craft): A writing prompt book with a sense of humor! I flipped through it on Christmas Eve and had to stop myself from cracking up. A number of the prompt ideas are outrageous (e.g., an ode to an onion, fixing the plot of the worst movie you’ve ever seen, a serial killer’s video library), but some are more serious or “down-to-earth” (e.g., something you’ve always regretted saying, describing something you once wanted badly and then never used once you got it). I can’t wait to try a couple and see what story ideas it might spark. (NOTE: For younger writers, I’d recommend this version instead, as some prompts in the one I received may not be appropriate for everyone.)

What books did you recently buy or acquire? Have you read of the books shown / discussed above? Feel free to share your opinions and most recent hauls by commenting below.