If I could use one word to describe the music of 2014 for me, it would be “weird.” Firstly, it was a year of transition and rediscovery music-wise. In May, I left my music-reviewing post at Sonic Cathedral after 5½ years so I could concentrate on novel-writing and other creative pursuits. Suddenly I had more freedom – and time! – to listen to genres besides female-fronted rock and metal. That explains why this year’s Top 10 list features the most variety I’ve ever had in my end-of-year countdowns. Yay! 🙂

Secondly, the quality of 2014’s music took me on a bumpy rollercoaster ride. There were awesome surprises, huge disappointments, and an unusually high number of “in-betweens” that I needed to replay several times before knowing how I felt about them. And in some ways, my #1 pick summarizes my year of music: It tips its hat to my “head-banging” past while shocking the hell out of me – in the best way possible. In fact, I don’t think my SC colleagues would have seen this one coming (except for one – she knows who she is, because it’s all her fault *winks*).

Buckled in? Then let’s go! 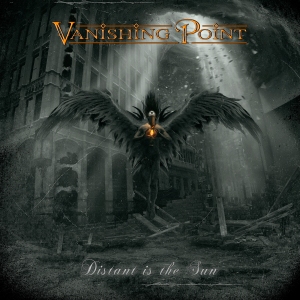 10. Vanishing Point – Distant Is The Sun

This “last” spot on the Top 10 list could have gone to a few different albums. In the end, I chose Vanishing Point’s Distant Is The Sun for one reason: earworms. These Australian power metallers crafted some of the catchiest songs I heard all year, especially the single “Where Truth Lies.” That track alone is proof that melody will always be the key to a good song, regardless of the genre. Besides that, Distant Is The Sun is a solid example of power metal: full of guitar muscle, vocal bravado (thanks to the powerful, gravelly pipes of Silvio Massaro), and lush synths that flirt with symphonics without getting too bombastic. If you’re a fan of Kamelot or Sonata Arctica and haven’t checked out Vanishing Point yet, you’re missing out.

I could spent an entire paragraph gushing about this album’s title track. Wait – I’ve already done that here and here. Never mind! So, I’ll focus on the album The Quantum Enigma, which is a desperately needed return to form for Dutch symphonic metallers Epica. Their previous CD, 2012’s Requiem For The Indifferent, left me bored and… well, indifferent. With The Quantum Enigma, however, Epica comes out swinging with an improved guitar sound, an edgier and more focused direction, a massive choir, and – for the first time in 9 years – live strings instead of synthesized stuff. (YES!) Their freshened perspective is heard in the songs themselves, which are more inspired and memorable than anything off of RFTI. The Quantum Enigma isn’t my favorite Epica album by a longshot (2009’s Design Your Universe holds firm to that title), but it satisfied me well enough to earn the #9 spot on this countdown.

British prog rockers Anathema have had a special place in my heart since their 2012 CD Weather Systems. (Short story: It changed my life.) Now they’re in my year-end countdown for the third year in a row, thanks to Distant Satellites. More brooding and atmospheric than past Anathema albums, it shows two different sides of the band’s music. The first half sounds like the Anathema fans have grown to love, with swelling, nuanced rock arrangements and emotive vocals and harmonies from Vincent Cavanagh and Lee Douglas. The second half strips away the guitars and live drums and goes entirely electronic. It’s an experiment that takes some getting used to, but techno Anathema still exudes the same soul as rock Anathema: It makes the listener feel, profoundly and intensely. It transcends the normal expectations for a music album – and that’s why I treasure Anathema’s music.

Fans of female-fronted metal might already be familiar with Dianne van Giersbergen. She’s the current vocalist for German symphonic metallers Xandria – but truthfully, her first and lesser-known band Ex Libris (who Dianne still sings with) is where this lady owns the mic. Medea is the Dutch prog metal band’s second album, and a retelling of the tragic Greek myth of Jason and Medea from Medea’s point of view. Three words (and please forgive the caps): HOLY CONCEPT ALBUM. Dianne proves she’s an acrobat as well as a spot-on actress; she glides between operatic and “rock” vocals and exudes charisma, vulnerability, and madness to paint a strikingly believable portrait of Medea. The music is nothing short of stunning, too. The melodies are stronger, the arrangements powerful and fluid despite their technicality, the wide range of influences matching the storytelling and Dianne’s “moods”… Wow. Just wow. The only reason why I didn’t rank Medea higher is the demands it places on the listener. This is an album that’s best enjoyed from start to finish, then giving yourself a breather before replaying.

6. Phillip Phillips – Behind The Light

Yes. Four rock and metal artists, followed by a former American Idol winner. Musically schizophrenic, but that’s how I roll. 😉 Besides, Phillip Phillips’ second album Behind The Light is an honest-to-goodness wonderful CD. It also shows noticeable growth from the husky-voiced, guitar-plucking singer-songwriter’s 2012 debut, The World From The Side Of The Moon. More variety, stronger lyrics, with a more personalized touch on his rugged, rootsy acoustic pop/rock sound and a delightful balance between maturity and fun. In fact, Behind The Light was one of three CDs that constantly coaxed me up out of my seat and dancing in my living room! (Yes, I admit to dancing in my living room. *looks around sheepishly*) But you know a music album has to be good if it persuades you to move and makes you smile deep down in your soul.

Remember my comment about how three albums got me dancing this year? I just realized I’m listing them one after the other. *lol* And had it not been for a random trip to a gift shop in February, I probably wouldn’t have found my way to David Arkenstone’s Celtic Garden. This fairy flight of (mostly) cover songs drifts from Celtic Woman and Loreena McKennitt, to Enya and Secret Garden. It balances breathtaking instrumentals with angelic vocals, and frolicking violins with breezy pennywhistles. Whenever I play it, Celtic Garden takes me to Ireland’s greenest hills, festivals of flowers and folk dancing – even to Middle-Earth. (Well, it features covers of “Into The West” and “Misty Mountains / Song Of The Lonely Mountain,” so of course it would!) It’s so lush and lively and immersive, and it brings out my inner child. How can you not love an album like that?

Rounding out the “inspired-me-to-dance” trio is Lindsey Stirling’s latest album Shatter Me. A former America’s Got Talent contestant, Lindsey combines electronic and dance music with violin gymnastics. And I seriously do mean “gymnastics.” Lindsey dives, flies, duels, dances, mourns, swirls – anything you thought you thought couldn’t be done with a violin, this young lady does it. I hear and feel so much joy and passion when Lindsey plays, that it sweeps me into imagination. Also, the amount of personality and variety of Shatter Me is astounding. No two songs sound alike. Trust me. Check out “Beyond The Veil,” “Roundtable Rival,” “Shatter Me” (featuring Lzzy Hale of Halestorm), and “Master of Tides” on YouTube, then play them back to back. You’ll hear what I mean – and you’ll get to watch some awesome music videos at the same time! Lindsey’s a genius when it comes to creative video concepts. 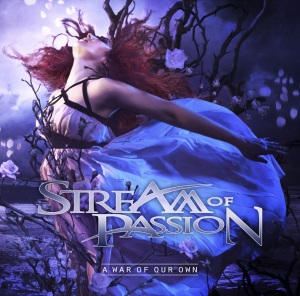 Stream Of Passion have been one of my favorite bands for a few years now. They’ve consistently put out solid albums that set them apart from the crowded field of symphonic metal bands – but in my opinion, each album has had its flaws. And then SoP left their record label and released A War Of Their Own in April after a massively successful IndieGoGo campaign. The Dutch band’s most progressive album to date, A War Of Our Own is also the truest representation of SoP’s sound: thick guitars, intricate piano-playing, stirring lyrics, Marcela Bovio’s entrancing vocals, and Mexican influences in both the music and lyrics. (Marcela writes and sings in English and Spanish.) Some songs like “Monster,” “Exile,” and “Earthquake” thrive on challenging arrangements and atypical time signatures; others like “Autophobia,” “The Curse,” and “Don’t Let Go” favor traditional structures. What SoP such a standout act, however, is their focus on emotion and songwriting. They could easily go all-out philharmonic bombast like other symphonic metal acts do, but they choose not to. Gracias, Stream Of Passion. Thank you for doing symphonic metal your way, because it’s gorgeous.

I admire new bands who succeed at giving a refreshing twist to a classic sound. For their debut album Dissonance, Dutch metallers Kowai take the lush, wintry cinematics of mid-to-late 90’s gothic-symphonic metal while adding unique touches. Melancholy guitars offer shades of Anathema’s quasi-metal days (think Alternative 4 and Judgement), and Laura van Nes’s warm, mid-range vocals contain an emotional depth that normal soprano voices (which are more typical for this style of metal) can’t achieve. The song collection itself flows smoothly between sweeping epics and brooding ballads, with only a bump or two along the way. Dissonance is so solid and delightful, I played it on repeat constantly after I first bought it – and I did so again while writing this entry. Fans of Within Temptation, Delain, and Xandria, check out Kowai’s music. Now. I promise you’ll love it.

I may be a metalhead, but I’ve NEVER picked a year-end favorite as bad-ass as We Rise, the debut album by New Zealand alternative metallers Devilskin. Yes, frontwoman Jennie Skulander grunts and screams on most tracks (along with singing in a clean style). Yes, there’s profanity sprinkled throughout the lyrics. None of that bothers me, however – because We Rise is SUCH a GOOD album. Every song soars with strong melodies, tight chemistry, and Jennie’s sultry, powerful vocals. What impresses me even more is the variety Devilskin explores here musically and lyrically. You’ll hear socially conscious anthems (“Start A Revolution”), mournful laments (“Burning Tree”), gritty breakup kiss-offs (“Little Pills”), danceable rockers (“Never See The Light”), and fits of primal rage (“Violation”). Not to mention string arrangements, three short interludes, and tiny details that show off the band’s sense of humor and sensitivity to “softer” emotions. With We Rise, Devilskin prove they’re headbangers with a conscience and the guts to express whatever feelings their songs evoke. I feel like such a rebel when I play this album – and considering I feel like I’ve gotten more “rebellious” as I’ve gotten older, maybe We Rise is the perfect choice to wear my 2014 music crown.

A neat fact about Devilskin’s We Rise: This independently released album has been one of the biggest success stories of 2014 in Devilskin’s native New Zealand. It spent 3 weeks atop the country’s official albums chart in July and August, and has earned a Gold sales certification (over 7500 copies sold). Take that, record labels. 😉

If I Were Still Writing For Sonic Cathedral….

I couldn’t help but be hypothetical for a moment. If I were still writing for Sonic Cathedral and had to make my annual Top 10 list of only female-fronted rock and metal albums, here’s how it would shape up:

What were some of your favorite albums of 2014? Does your Top 10 list have any picks in common with mine? Feel free to share your choices by commenting below!