A Peek Into the Novel’s Villains and Antagonists

“Chronicling The Craft” is an article series where I share my experience with writing my current work-in-progress (WIP), which is a fantasy novel. Every 5,000 words, I let readers know what I’ve accomplished since the previous article and share advice, discoveries, techniques, etc. Besides the word count in each article title, a “chapter ticker” at the top also tracks my progress as I use the skip-around / “writercopter” method to write the novel. Today’s installment celebrates the book reaching 75,000 and 80,000 words in length.

Yup, it’s a double installment of Chronicling The Craft! Although it doesn’t exactly mean double the fun, topics, length, etc. I went on another planned writing vacation during the first week of September. Going into that vacation, I was closing in on 75,000 words, but I didn’t want to halt the novel’s progress partway through the week to squeeze in a blog article. So, I decided to barrel past the 75K mark and see how far I could take the novel from there. Today, it stands at a hair over 80,200 words. *does a happy dance*

Here’s what I’ve worked on since the previous Chronicle:

Breaking another 25,000-word milestone means something special with these Chronicles: It’s reveal time! So, you get to learn something else new and exclusive about the WIP. Today, I’m thrilled to share with you some tidbits about the villains and antagonists. I won’t tell you everything, for length’s sake and in order to not give away too much of the story, but just enough to sate your appetite.

Also, the images shown below are in no way an accurate or complete representation of each character. They’re mainly to give you a rough idea of what I’m picturing when I write. This goes especially for the first photo – the Bhadurak should be more frightening and less Pac-Man-ish, but it’s close enough.

The Bhadurak: The best way to describe the Bhadurak is a race of parasitic demons, led by the calculating Nargorak. These creatures appear as faceless, wingless shadows with fire-red slits for eyes and a raspy, penetrating voice that (according to witnesses) “doesn’t come from a mouth, but from every part of the Bhadurak.” In their normal shadow forms, the Bhadurak travel by flight and are never alone. They do not eat, sleep, or require nourishment of any kind; and they can’t fall ill or be injured or killed by weapons, poison, or other “normal” means. Basically, the Bhadurak is the Great Isle’s “undead” species.

A Bhadurak’s parasitism is usually strategic. The demons choose hosts who are either physically weak or unwell (ill, mad, or depressed), or harbor a flaw that the Bhadurak can manipulate as a means to their end. The Bhadurak then physically forces itself into the host’s body (known as a “shadow strike”) and begins feeding off the host’s energy and soul. Eventually, the parasite overpowers the host’s free will with its own, leading to the person’s death. This process can take several days up to months, depending on the host’s mental and physical condition and the Bhadurak’s plans for that person. And while a host always exhibits symptoms of being possessed by a Bhadurak (known as the “shadow sickness”), the host can’t be saved once the parasite inhabits them.

Now, if you’ve been following these Chronicles, you already know that the novel’s protagonist Eva belongs to a race of Faeries. What if I told you the Bhadurak’s origins are tied to the improper burial of Faeries? In Eva’s world, a proper Faerie “burial” is a memorial service where Faeries must recite an irreversible spell that delivers the deceased Faerie’s magical remnants into the heavens. If a Faerie is denied that “deliverance,” their magic decays and becomes a literal – and resentful – shadow of their former self. The Faeries also hold the key to the Bhadurak’s destruction – but Eva and her people don’t know that at the start of the novel.

I’m sure you may have questions about the Bhadurak, but I have to stop here to share the story’s other antagonists with you.  😉

Prince Virikar of Fae: Prince Virikar (a.k.a. Virik) is the Commander of the Royal Guard of Fae and the older of the Faerie King’s two sons. However, he’s not next in line for the throne. That privilege was handed to Virik’s younger brother Milos after Virik’s selfish, violent behavior led to the death of the King’s top advisor. Since then, Virik has been desperate to regain his father’s favor. That’s all backstory, however; only hints of it will appear in the story.

When readers first meet Virik, they’ll see he’s charming, persistent, and loyal to the King. He’s also manipulative, condescending, and brazen enough to rob others of their due credit – and he’s not on good terms with Eva and the rest of the Council. Eva witnesses this first-hand when Virik confronts her early in the WIP, and then when he threatens (both at home and in letters to the Council) to take control of the Mountain Folk’s mission and send the Council home.

For me, the key with Virik is to make him a sympathetic antagonist, not a one-dimensional source of aggravation. Unfortunately, the latter was my original idea for him. *cringes* Once I read more blog articles about writing villains and antagonists, I realized I was taking Virik down the wrong path. So, when it’s time to revise the WIP, I’ll need to tweak Virik’s lines and actions to change him from an annoying bad-boy into a son who will boldly yet blindly do whatever it takes to reach his goals.

Lord Elkesoro: The Faerie King’s current top advisor, Lord Elkesoro is deeply prejudiced against the Mountain Folk. When the King chooses to help Aurek and his men instead of following Elkesoro’s urging to imprison them, Elkesoro takes matters into his own hands. His actions lead to his own exile from Fae, which further motivates Elkesoro to try to disrupt the Mountain Folk’s mission – and incites in him a bitter vengeance against his own kind.

Out of all the antagonists in the novel, however, this last one may the most important one to the story… 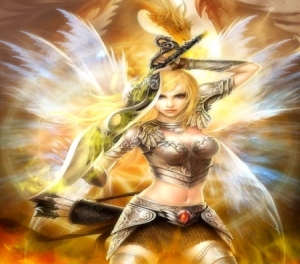 The Protagonist, Eva: If you’ve already read Eva’s character profile, you may have deduced that Eva can be her own worst enemy. She’s loathed the Mountain Folk since she was 5 years old, when Eva’s family was brutally attacked and her parents killed by three Mountain Men. So, when Aurek and his troupe of Mountain Men arrived in the Faerie’s forest home, Eva is forced to confront her long-held hatred and her desire for revenge – especially once her Council is tasked to help Aurek’s men on a mission that will take them perilously close to Bhadurak territory. Will Eva learn to let go of her past and do what she needs to do as a Councilor? Or, will she lose control of her anger and prejudice and jeopardize the mission, as well as her own life?

These four groups of characters – the Bhadurak, Prince Virik, Lord Elkesoro, and Eva – make up the primary antagonists in the WIP. Other conflicts will arise from more minor “antagonists.” For example, the different personalities of Eva and her fellow Councilors will cause friction among them, and Eva and Aurek will butt heads at times. The Mountain Folk will also face discrimination from other non-Faerie characters during their journey. Thus, the novel will be fraught with all kinds of tension, as any story should.

Who are your favorite literary villains and antagonists? Why? In your opinion, what makes a good villain or antagonist? If you’re working on your own WIP, who are your villain(s) and/or antagonist(s)? Feel free to share your answers – and ask any questions about the above – by leaving your comments below.

Next Chronicle: When the WIP reaches 85,000 words