Textbooks + Statistics = Back To School?

The writing vacation was a huge success! Instead of taking almost 2 months to reach the next milestone (as it did last time), it took less than one week to go from 15,000 words to 20,000 (or 21,000+, to be accurate). Honestly, it felt more like shooting from one benchmark to the next, because of the shorter span of time. I guess that’s what happens when you a) plan to spend a large amount of time concentrating on your work-in-progress, and b) are “in the flow” during each sit-down. And even though I purposely set no concrete goals for this week, I can’t explain how proud and excited I am with what I accomplished in a few days.

Here are the chapters I focused on this week: 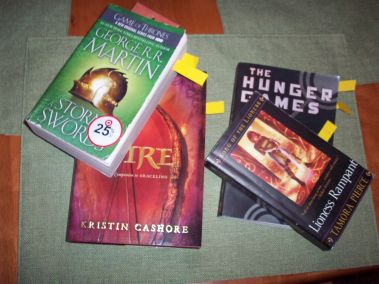 My “textbooks” from the past week.

One habit I created for myself this week was to use books I’ve read as “textbooks.” By this, I mean that I’m observing and noting writing techniques, not copying what published authors have already done. Here’s an example: Parts of Chapter 4 involve describing a massive structure where an event takes place as well as the crowd inside of the venue. As I was writing the chapter, I wanted to know how published authors approached similar events. How much time did they spend describing it all? What details did they point out to set the scene and convey the desired emotions? So I pulled out a few books and re-read specific scenes of interest, namely the bear pit scene in George R.R. Martin’s A Storm of Swords, Fire’s arrival in King’s City in Kristin Cashore’s Fire, and a couple of pre-Game crowd scenes at the Capital in Suzanne Collins’ The Hunger Games. After reading these scenes, I noted them for future reference by placing Post-It flags on the respective pages. Then I applied what I had noticed to my vision for Chapter 4 and went back to work.

I did the same with Chapter 5 as well, but for a different reason. I knew I would need some “help” with writing action scenes, especially because it’s been a few years since I last wrote an action scene. So, again, I opened a couple books (A Storm of Swords again, and Lioness Rampant by Tamora Pierce) that feature strong, memorable action scenes and absorbed what was there before returning to my own work. Lioness Rampant was particularly helpful; Pierce is a master of writing action in medieval / high fantasy. Her crisp sentences and strong verbs create the tension needed for such scenes and paint vivid pictures of combat and swordfights in your mind.

In hindsight, I’m glad I finally took the initiative to use my book collection as “textbooks.” This way, I can mark specific scenes and return to them for “guidance” as needed. I’d been meaning to do this for a while; I think I’d just been lazy (or focused?) to stop being a writer and start being a student again for a few minutes.

Also, while working on this novel, I’ve been keeping a Writing Statistics Tracking Sheet. At the end of each novel-writing session, I use a Microsoft Excel spreadsheet to log in my progress from a statistical standpoint. The tracking sheet looks something like this. (Click the image to see a larger version.) 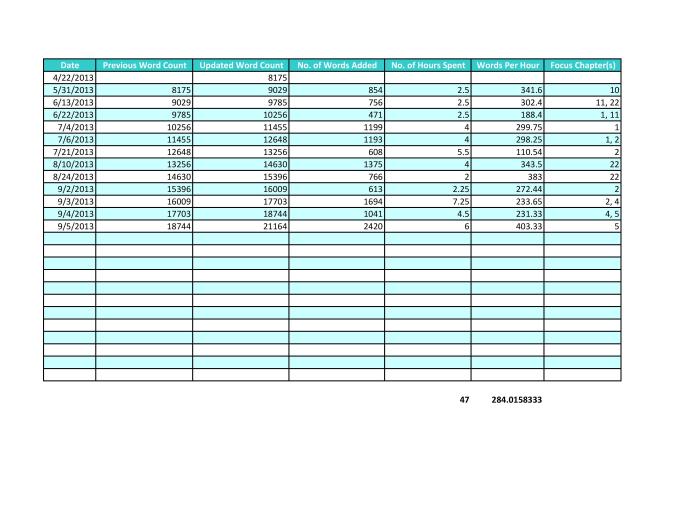 As you can see, I track the increase in word count, the number of hours I spend each session, and the number of words per hour for that session. There are more columns to this tracking sheet (which didn’t fit in a single image) that track the number of chapters in progress / completed / not started and which ones in each category. Also, at the bottom of the image, you can see two more numbers: the total hours spent on the novel since I began the tracking sheet, and the words-per-hour overall average. This table-format Excel sheet is fairly easy to set up (although some of the math needs to be done by calculator and then plugged in – bah, Microsoft!), and can be used as an organizational tool as well as a progress snapshot. And we writers need to keep ourselves organized, right?

So, that’s where things stand now, and I’m incredibly happy with the results. Equally as important, I made this much progress in one week without isolating myself. This vacation has been a healthy mix of writing, normal household activities, and social events. So, I can look back on my time-off and be grateful that I didn’t turn into a hermit! Of course, with my vacation ending soon, the novel-writing pace will slow down considerably. That’s fine, though. I’ll need the extra time to finish my write-up about the protagonist’s race – and decide what to share with you for the next edition of Chronicling The Craft. Remember: I promised a big reveal when I reach 25,000 words! 😉

How are your works-in-progress coming along? Do you keep track of your novel-writing statistics? And, do you use novels or reference books as part of your “studies” as you write? If your answer to either is “yes,” how?

Until Then: In a few days, I’ll announce an open mic night appearance I’m planning for the end of September! Also, I’m almost finished with my review of Hydria’s Freakshow for Sonic Cathedral. Expect that to go online in the next couple weeks.