Getting The First Chapter Right(ish) The Second Time Around

Wow. It’s been over 2 months since the previous Chronicle. And yes, it’s a sign that progress on the novel has been slow, but not because I’ve been struggling with the writing. The words seem to flow right through me during each sit-down, which is wonderful. Rather, this summer has just been very busy. I had made plans for social gatherings and day-trips on several weekends, and really enjoyed it all. However, because I have a full-time job and other responsibilities and commitments, I only have time to write at night and on the weekends. And with most of the summer activities planned for weekends, it has cut down on my creative time even more.

But I kept at writing when I could – and I’m proud to say that Chapter 1 is now “complete”! By “complete,” I mean that parts of it will need to be revised at a later date. (I’ll explain this shortly.) Also, prior to finishing Chapter 1, I resolved a dilemma I had shared when I reached 10,000 words: I decided to split the events for my original first chapter into two separate chapters. So, in essence, the chapter that’s now “complete” was the first half of my original Chapter 1. Does that make sense?

I’ve also worked on Chapter 2 (the second half of the original Chapter 1) as well as the current Chapter 22. I chose to skip around again because, away from novel-writing, the past few weeks have been frustrating and stressful – to the point that I felt downright angry some days. Fortunately, I found two good ways of combating that stress and anger: exercising (I enjoy walking, and I take aerobics classes two nights a week), and writing. Chapter 22 involves a major revelation about the truth behind the company’s mission. The protagonist doesn’t like what she learns one bit and feels hurt and manipulated. Writing the dialogue scene where she’s screaming at two of her companions was like attacking a punching bag; it offered both therapy and release. And boy, did it feel good afterwards!

As discussed in the previous Chronicle, I’ve finally figured out an opening scene for the novel that I’m happy with. In fact, I’m pleased enough with it that I feel comfortable summarizing Chapter 1 for you, albeit with few details or specifics. (I don’t want to give much away!) So, vague it may be, but here it is:

When Chapter 1 begins, the main protagonist is finishing one round of a game she’d been playing with three of her closest friends. The game takes place in the forest where the protagonist and her race live, and combines hide-and-seek with magic. When the four friends split up to play one more round, the protagonist and one of those friends find a hunting trap – a specific kind of hunting trap that their race doesn’t use or make.

It’s important to note that this discovery, as well as the ensuing search for the owners of the hunting trap, will pull the protagonist and her friends into the novel’s main conflict. It also sparks bitter memories from the protagonist’s childhood and causes a long-held resentment – and thoughts of revenge – to surface once again.

This opening scene isn’t much different from the original version I’d started writing. Both versions involved the protagonist hunting or playing some kind of game with her friends and her finding the trap. One difference is that the vision for the novel’s first scene is much clearer to me now. Not only do I know what game she’s playing now, but an important element of the game appears later in the book. (Foreshadowing! Yay!)

The other difference is that I feel more confident about the new approach for the opening. The original tone was a little too light-hearted; and with too many details still ambiguous, I’d been having difficulty imagining where to go from there. In other words, it wasn’t working, and I was frustrated with it. So, rather than stay stuck on that part of the novel, I “hopped in my writercopter” and focused on other chapters for a while. It turned out to be the perfect way to “fix” Chapter 1. 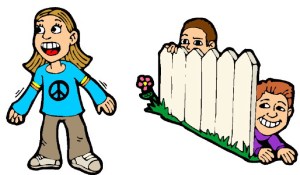 Hmmm, where did those secondary characters go?

The renewed idea for the game snuck up on me first. Then I wondered, “What would be an interesting way to start the novel? What could grab the reader’s attention right away and convince them to keep reading?” That’s when the second idea struck: Describe her mindset as the hide-and-seek game winds down. It could be a neat way to briefly introduce the protagonist and her world with a hint of suspense, just to see how she reacts under such circumstances. The key word here is “briefly.” At some point, the reader needs evidence that the plot’s unfolding, so this kind of introduction can’t go on for too long. That was a major problem I had with the first book I’d written: According to my alpha readers (as well as myself, in hindsight), the first chapter was well-written but boring, mostly because the plot didn’t get going until the end of the second chapter. It’s a mistake that most novice writers probably make, and since I’ve made it once I want to avoid it.

That sums up where things stand right now with the novel-in-progress. I’m on vacation the first week of September and planning to work on the book every day. And I’m so excited about it! Hopefully I’ll reach the next milestone in less than 2 months and avoid such a long gap between Chronicles. Also, I’ve decided what I’d like to share during the “reveal” in the Chronicle for 25,000 words: the protagonist’s race. The full-length write-up, which I’ve started sharing with friends, is mostly finished at this point. But it’s already 10 pages long – too long for a blog article! So I’ll have to pick the most important points to share. And then if you have any questions after that article, I’ll be happy to answer them.

What do you think of the premise for Chapter 1? Based on the summary, do you think it might work? Also, have you ever written a specific scene because its tone or moods reflect your own moods or feelings?

Coming Soon: Tomorrow I’ll unveil the top five artists of my Sonic Cathedral Retrospective countdown – including who I chose for the #1 spot!