I remember the day I first heard of Kristin Cashore. It was the 2010 Boston Book Festival, and the YA fantasy author was one of four speakers at a young adult fiction forum. My interest in Cashore’s work immediately pricked up when I found out which genre she writes in. However, what convinced me to buy her two previously published books (Graceling and Fire) on the spot was the moment she opened up for the audience a notebook where she was writing the first draft of her third book. I thought, “YES! She writes her first drafts by hand, too! We have something in common!” I read Graceling and Fire back to back shortly after the Boston Book Festival, and adored them both. So I was eager to read Bitterblue, the novel Cashore offered a “sneak peek” of during the festival, as soon as it was published. 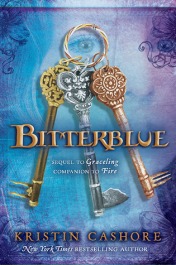 the kingdom of Monsea. At that time, the little girl believed that her father’s death meant the end of a reign rank with violence, brainwashing, and other unspeakable crimes – all committed by Leck, who possessed with an extreme skill (a.k.a. “Grace”) of telling lies that everyone believed. Year later, at age 18, Bitterblue believes her advisers are sheltering her from numerous truths about her kingdom. Have her people woken from Leck’s spell and recovered from his tyranny? What’s really happening on the other side of the castle walls? Bitterblue decides to venture out at night to find out for herself. This move sets off a chain of events that leads Bitterblue to even more discoveries about her father – and to risk her life and heart in order to set things right in Monsea.

Bitterblue distinguishes itself from its predecessors with a different tone. Fire and Graceling wove action, romance, and “coming-of-age” drama into the fantasy storyline. Bitterblue, on the other hand, reads more like a mystery novel with a fantasy foundation. The young queen discovers rooms and artifacts in her castle that she never knew existed, and finds clues that shed light on long-unanswered questions about her father’s reign. Of course, Bitterblue does include a love story as well as moments of violence, but not to the extent described in the other two books. This steers Bitterblue away from the stereotypes of  fantasy plots and makes it unique. I personally enjoyed wondering what Bitterblue and her companions would find next, even though I knew some of their findings would be grim.

As in Cashore’s previous novels, the lead character of Bitterblue is a young woman who undergoes a personal transformation. However, Bitterblue is much different than Katsa (Graceling) and Fire. She’s the first Cashore lead to not have a Grace or any kind of “superpower.” So, right away, readers will identify with this more human and vulnerable heroine. Also, when the novel begins, Bitterblue’s plagued with insecurities. Some stem from her self-perception as a queen; others, from her desire to trust others competing against her growing distrust in her advisers. What wins out in the end, though, are Bitterblue’s curiosity, smarts, and compassion. Those qualities allow Bitterblue to become a detective,  strive for solutions to improve her kingdom’s welfare, and build her confidence along the way.

Some aspects of Bitterblue’s character threw me off, however.  At times, Cashore portrays her as childish – not so much spoiled (as one might expect from royalty), but sometimes whiny and somethings making decisions or acting in a way that made her seem more like 13 years old than 18. Also, Bitterblue’s vocabulary doesn’t seem natural for a girl her age. (I should’ve taken notes to offer examples – but I forgot.) But then came the realization that most every character in Bitterblue uses words in their speech that are a bit high-level for young-adult fiction. Sure, occasional words that require you to refer to a dictionary are fine; it strengthen the reader’s vocabulary. But when it happens as habitually as it does in Bitterblue, the average young adult reading this book may get tired of it. The funny thing is, I went back to Graceling and Fire, and discovered the same trend in both books. Why didn’t I notice it before? Maybe because I wasn’t so annoyed with Katsa and Fire as I was with Bitterblue.

Otherwise, I didn’t have any other concerns with Bitterblue. The plot twists and turns as it should when its characters are solving a mystery. Some events took me by great surprise and pleasure, especially (spoiler alert!) the coming together of Cashore’s three female leads from all of her books. The only question that this third novel left me with was, What was Katsa’s experience in The Dells? When she returns to Monsea with Fire, she tells Bitterblue, “My arrival created quite a commotion, let me tell you.” Obviously the Dellians reacted that way towards Katsa because (as Katsa had said just moments before) Gracelings don’t exist in The Dells. But, I wanted to know what happened. I bet that experience in itself could be a novel.

I’m jumping ahead, though. Who knows what and who Cashore will write about in her fourth novel? For now, I can say that Bitterblue isn’t my favorite of hers, yet it kept me wanting to turn each page and find out what would happen next. I’m also pleased that Cashore chose to write with a mystery slant instead of the expected tone of action and war. It shows that fantasy has the potential to be as versatile as contemporary or “reality-based” fiction. In my opinion, doing something different once a while makes your work more interesting – and after finishing Bitterblue, I’m still interested in reading about the Graceling Realm when Cashore’s next novel is out.