Yep, the romantic sap in me needs to read books like this every now and then. 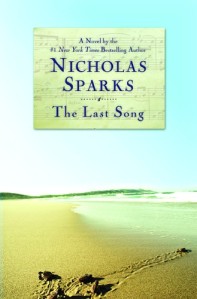 “The Last Song” is the latest in a string of bestselling books by Nicholas Sparks, an author best known for tugging at readers’ heartstrings with love stories.  All kinds of love stories, in fact – love and loss; long-distance relationships; love found in the most unexpected places, etc etc.  Most of Sparks’ stories have been targeted at older readers, since most of his main characters are 30 or older.  However, with “The Last Song,” Sparks writes a story of young love and family relationships that people of all ages can relate to.

Veronica Miller, better known as “Ronnie,” is livid when she finds out she and her younger brother Jonah are spending the entire summer with their father Steve.  It’s been three years since her parents had divorced, turning Ronnie’s world upside down – and by no means is she about to start talking to her father again.  She has even abandoned one of her greatest passions – playing the piano – and her dream of going to Julliard, just because her father was a pianist and once taught at the prestigious arts school.  But, somehow, her mother has decided that it’s in everyone’s best interest for Ronnie and Jonah to go to North Carolina.

And what an eventful summer it is.  Between arrests, baby sea turtles, a wedding, and acts of fiery violence, one thing seems to sneak up on Ronnie unexpectedly.  She meets a boy her age named Will – or, rather, he runs into her during a volleyball match.  At first they seem to be complete opposites: he, the town heartthrob with his future set in stone by his demanding mother; she, an angry rebel who’s unsure of what she wants for her life.  Slowly, Ronnie lowers her guard and falls deeply in love with Will.

The most poignant relationships in the book, however, are the new ones Ronnie and Jonah forge with their father.  It’s clear from the beginning that Steve wants to get to know his children again.  Jonah welcomes the chance wholeheartedly and bonds with Steve in the first week as they fly kites and work on a new stained glass window for the local church.  Ronnie is less receptive at first, but through a series of events early in the story she learns her father is not such a moron after all.  This realization, as well as her love for Will,  transforms Ronnie into a mature, caring young woman – and teaches her how the most meaningful relationships can break the heart as well as heal it.

One thing Sparks does very well is creating characters that fit his vision.  For example, as the first chapter begins, Ronnie is sarcastic and stubborn – and boy has she got a short fuse!  I wouldn’t say Ronnie fits the “typical teenager” stereotype, but she certainly reflects how some girls her age can act.  As for Steve, he’s an exemplary father.  He is softspoken, funny,  deeply religious, and – most of all – full of unconditional love for his children.  Readers will admire him as the story continues.  My favorite character in “The Last Song,” however, is Jonah.  Like Ronnie, Jonah fits the mold of an eight-year-old boy.  He loves his cartoons, is a finicky eater, and gets grossed out by displays of affection.  He is also incredibly hilarious.  There are several one-liners or conversations of Jonah’s that will make you laugh out loud.  But, I won’t share any here.  That would spoil the fun!  🙂

I also was pleased with Sparks’ ability to show the musically inclined characters’ passion for what they do.  I’m not a musician, but being a lover and reviewer of music I know how such people feel about their music.  It’s very difficult for me to explain it, though… And somehow Sparks nailed it in this book.  One of the plot’s central points is a song that Steve is struggling to complete, a song that ultimately defines the renewed bond between him and Ronnie.  I won’t give away the circumstances leading to the song’s completion, but here are Steve’s first thoughts upon hearing the finished song:

Life, he realized, was much like a song.  In the beginning there is mystery, in the end there is confirmation, but it’s the middle where all the emotion resides to make the whole thing worthwhile.

And that is so undeniably true.

“The Last Song” is the second book I’ve read in the past year that is told from multiple points of view (the first one being Heather Gudenkauf’s “The Weight of Silence”).  Sparks masters this trick to an extent.  Will’s POV ends rather abruptly, with still quite a bit of story left to tell.  This is probably because the last several chapters revolve more around Ronnie and Steve, and to weave Will back in would disrupt the story’s flow.  Yet, it left me hanging.  I’m not quite sure how this could be resolved, or if it’s even an issue at all…  And I don’t quite understand why the POV of Marcus (a local gangmember and former classmate of Will’s) was needed to help tell the story.  Yes, he may the main antagonist, but his sections were like random jaunts off the path.  They stalled the story in an unnecessary and unsettling way.

Also, I thought the flow of events in “The Last Song” was bumpy at times.  A couple major events in the plot seemed to come out of left field and greatly surprised me.  Maybe the foreshadowing needs to be more clearly developed – or maybe it’s the mark of a highly skilled writer who knows exactly what he’s doing.  Perhaps I’ll let the experts duke that battle out.

Finally, for everything that Sparks does well, though, there is one facet of his writing that irks me: His stories are plain-as-day predictable.  You know as soon as you turn to the first page that 1) the main character will fall in love, 2) someone will die, and 3) you will reach for a box of tissues at some point.  Of course, love and death are the two overriding themes in Sparks’ books, but there comes a point when the readers thinks, “OK, when is he going to do something just a smidge different?”  Well, “The Last Song” sort of heads in that direction.  It’s a coming-of-age story – but it’s also a love story.  So it may be that Sparks is comfortable in his plush, romantic niche, and that may not change any time soon.

Regardless of all this, “The Last Song” is an enjoyable book.  It’s not one of Nicholas Sparks’ best (try “The Notebook,” “The Wedding,” or my personal favorite “The Guardian”), yet it manages to touch the heart.  Die-hard readers of Nicholas Sparks’ books will be pleased, and other more casual fans might like it as well.  Or, if you’re not inclined to read the book, go see the film for “The Last Song” when it comes out on Friday, March 31.  Make sure you bring tissues with you, though.