Finally, I have some time to gush about my latest music obsession.

Sounds Like: Gothic rock/metal with lots of atmosphere/keyboards, led by deep and sensual female vocals.

Background Info: After Flowing Tears’ brilliant 2002 album “Serpentine,” singer Stephanie Duchene quit the band.  I wasn’t a fan at that point, so I’m not sure how the fans reacted to the shakeup then.  But I’m willing to bet they were worried.  Stephanie’s smooth, smoky vocals were a crucial part of Flowing Tears’ sound.  Fast-forward to 2004, when “Razorbliss” was released.  If fans were at all concerned how much the new singer, Helen Vogt, would alter FT’s sound, “Razorbliss” left them relieved and pleasantly surprised.

The Music: “Razorbliss” is the logical forward step that led Flowing Tears from the calm, darkwave-flavored “Serpentine” to the spectacular raging bull “Thy Kingdom Gone.”  The songs are generally heavier, more varied, and more vibrant than their older material.  Yet, atmosphere is still abound.  The title track , which kicks off the album, is a perfect example of this evolving sound.  In just over 3 minutes, you’ll hear layers of intricate drumwork, crunching guitars (and a lively solo just after the 2-minute mark), cosmic blips and bleeps, and a satisfying sample of Helen’s wide range.  However you interpret the lyrics, “Razorbliss” the song is perhaps the most enjoyable in Flowing Tears’ repertoire.

“Razorbliss” is also a more uptempo album.  None of the faster numbers sound alike.  Distorted guitar riffs and an eerie keyboard hook give “Virago” an embattled, supernatural feel; while “Mine Is the Ocean” is effervescent and catchy in all its sweet gothic goodness.  There are also some good midtempo tracks on this album, including the turbulent “Firedream” and the bittersweet, alternative-tinged “Undying”  (which would have been an excellent single for “Razorbliss”.)

There are only two real ballads on “Razorbliss”: the bleak yet driving “Ballad of a Lonely God,” and the yearning closing track “Pitch Black Water.”  “Believe” is also an excellent slow song.  Its ringing siren start is followed by sultry verses and aggressive choruses.  Guitarist Benjamin Buss offers a fiery solo on this song, too.

The Vocals: Fans and critics agreed made a common observation when “Razorbliss” was: Helen Vogt sounds a lot like Stephanie Duchene.  (Did you know that, prior to joining the band, Helen admitted that FT was one of her favorite bands and Stephanie one of her singing influences?)  Both women have lower-range, emotive voices with greater range that you’d expect.  However, what sets Helen apart from Stephanie is her charisma.  Even her softest vocals are more interesting to listen to.  She does sound a bit reserved on this album, as though she’s holding back the true force of her talent.  Personally, I like to think she purposely planned to unleash herself on the next album.  😉

So it’s difficult to pick individual songs where Helen sounds her best.  It often depends on what the listener prefers: Deep and rich (“Razorbliss”), playful and harmonic (“Mine Is the Ocean”), daring and unbridled (“Firedream”), or a seductive blend of all she can be (“Believe”).

The Lyrics: Flowing Tears has never been a band to write sappy or happy songs.  At the same time, it’s not easy to decipher the story each song tells.  From what I’ve managed to interpret so far, the lyrics mix emotions with images and metaphors, and often match the mood of the music.  Thus, Flowing tears’ lyrical style is mature, obscure, and poetic.  It intensifies the dark mystery of “Believe,” fuels the sinister flame of “Firedream,” and adds a personal touch to “Pitch Black Water.”  I’ve even read the lyrics by themselves and still felt them speak to me.

Weaknesses: Again, it’s a matter of preference.  I don’t find “Razorbliss” to be repetitive or boring in spots.  But I will say that “Maladine,” which features a sitar-like solo that’s unexpected and sexy, has a chorus that doesn’t quite match the rest of the song.  So that would be the only unexciting track on “Razorbliss,” IMHO.

Well, “Razorbliss” has helped cement Flowing Tears’ place on my list of my top five favorite bands.  It’s neither “Serpentine” 2.0 nor too much of a precursor to “Thy Kingdom Gone,” and that’s why I love it.  Rather, it’s a flavorful dish of Flowing Tears’ old sound with hints of what’s to come. The end result is not too spicy or chock full of substance, yet oh so satisfying to the ears and the muse.  (Sheesh, now I’m hungry!)  Fans of Lacuna Coil circa early 2000s – or anyone looking for honest, high-quality gothic metal that’s “not too freaky” to listen to – will appreciate this album.

And below, a Wordle image to show the most commonly used lyrics in “Razorbliss.” 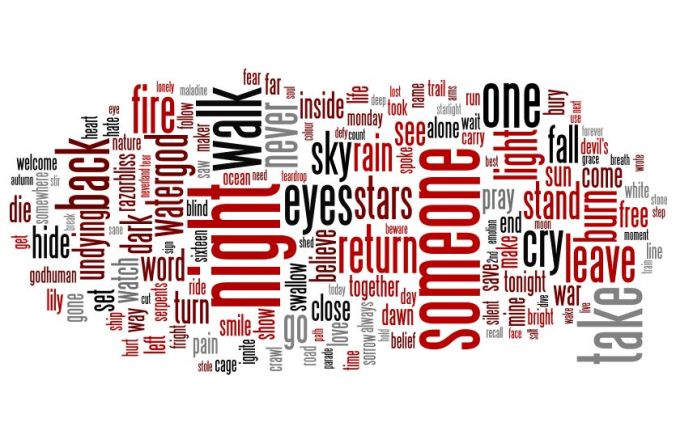