Ursula LeGuin is best known for her fantasy and science fiction books, from the Earthsea cycle to “The Left Hand of Darkness.”  So when I first picked up “Lavinia,” I thought it would fall into one of her niches.  Turns out I was wrong – and, in the end, pleasantly surprised. 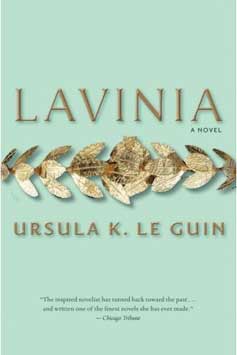 “Lavinia” is based on Vergil’s epic poem The Aeneid, in which Aeneas and his Trojan army fights to claim the king’s daughter, Lavinia, in order to fulfill a prophecy.  Lavinia does not speak a word in The Aeneid.  This must have prompted a question in Ursula LeGuin’s mind:  What is Lavinia’s story?  And so she gave Lavinia a voice with this story.

Lavinia is the daughter of King Latinus and the princess of Latium, or ancient Italy.  She grows up knowing only peace, freedom, and her mother’s violent, bitter disappointment in losing her sons.  When Lavinia turns seventeen, her first suitors come calling.  Lavinia’s mother wishes her to marry handsome King Turnus of her homeland.  Lavinia, however, is intimidated by the young king and wants justification for her decision not to marry him.  So with her father’s permission, she travels to the sacred groves of Albunea and learns her fate from an oracle (presumably Vergil himself): She must marry a foreigner, which will cause a bloody war, and her husband will not live long.

Soon after this, a fleet of Trojan ships carrying Aeneas sails up the Tiber.  Lavinia is the first to spot them – and at that moment, she chooses to take her destiny into her own hands.  What follows in the wake of her choice is a amalgam of joy and sorrow, love and pain. All the while, readers sense that Lavinia has fully accepted the oracle’s prophecy and has no regrets.

A good writer will always do their research before writing historical fiction.  LeGuin undoubtedly did her homework for “Lavinia,” and it shows.  Readers are immersed in a time before Rome was built, when people wore togas, omens and prophecies were unconditionally abided by, and salt was collected from salt beds at the mouths of rivers.  There are no glaring historical inaccuracies, nothing that immediately makes you want to scratch your head.  The narration fits the time period – it’s simple and to the point, and all of the characters speak in this manner.

As for Lavinia the character, LeGuin portrays her as strong, sensible, and wise beyond her years.  Once her suitors come to her door, she matures very quickly and wishes to speak for herself rather than have others force her to do their bidding.  Lavinia is also pious [this word appears several times in the novel].  She worships her gods (which are eventually adopted as the Roman gods) and adheres to the oracle’s prophecy without question.  While her speech is as understated as LeGuin’s writing style, her monologues to the reader can be quite poetic.  (Which makes sense, since LeGuin also wrote poetry.)  For instance, this is what Lavinia tells the reader after her

I have found my way so far, even though the poet did not tell me the way.  I guessed it right, without mistake, from things he said, the clues he gave me.  I came to the center of the maze following him.  Now I must find my way back out alone.  It will be longer and slower in the living, but not so long, I think, to tell.

I have no complains about this book.  However, my concentration broke a little when I read the war scenes.  Personally I have difficulty reading fighting scenes when they are written in a mechanical way, without much action.  Don’t get me wrong.  LeGuin must have written the war scenes this way so she could quickly transition back to telling Lavinia’s story.  Still, those parts bored me a little, and luckily there are only a few.

All in all, I have to commend LeGuin on another job well done here.  “Lavinia” is a mezmerizing foray into historical fiction from an author who is mythmaker in her own right.  It balances ancient tradition and simplicity with spiritual and romantic elegance without leaning too far in either direction.  I finished this book with the same awe and admiration that I felt after reading her fantasy books.  Fans of LeGuin who may have hesitated to read “Lavinia” should reconsider.  This is a work of passion, and fully deserving of a spot on the shelf next to “A Wizard of Earthsea” and “The Left Hand of Darkness.”

For more information on “Lavinia” and Ursula LeGuin, here are a couple links: