First off, I’m changing the title for my music “reviews” on my blog.  “On Repeat” has a nicer ring to it than “Hooked On” does.  I’m also introducing a new set-up that, hopefully, will make this entry shorter than the Gotthard one.

Now, I’ve been dying to write about this album for some time now, and tonight’s my first chance to do so.

Album: “On This Perfect Day”

Background Info: Arjen Lucassen is regarded as one of the genuises of progressive rock and metal.  He’s the mastermind behind the rock opera project Ayreon and the metal space-capade Star One, as well as one of the founding members of Stream of Passion.  Now, with the Ayreon saga completed and SoP moving on with new members, Arjen has focused his efforts on a brand new project, known as Guilt Machine.

Guilt Machine is probably Arjen’s least complex musical project.  It doesn’t feature 17 singers and ten or so guest musicians.  Instead, there are only three musicians (five, if you count the string instruments) and one singer:

Music: Progressive rock/metal is a very complex musical style, and Arjen does it well.  Each track is lengthy (the shortest track, “Over,” is just over 6 minutes long) and layered, so they hold your attention till the end.  Also, most of the songs don’t keep to the typical verse-chorus-verse-chorus format.  “Over” is the one exception, but it’s still more intricate and evocative than your average radio hit these days.

How does Guilt Machine sound?  Well, a lot like Ayreon, but more quiet and brooding.  There are plenty of loud moments, including Lori’s awesomely complicated guitar solos (lots of “wah” and tremolo effects), and some of those spacey-sounding synthesizers.  But, there are also plenty of softer moments, which are beautiful and soothing to listen to.  “Twisted Coil” is probably the best example of the balance of the loud and quiet moments, since it’s the most epic track on the album.  “Over” and “Season of Denial” also combine the two sides of Guilt Machine effectively.

There is, however, one song that sends chills down my spine and a thrill through my body when I hear it: “Green and Cream.”  While it starts off as atmospheric and calm, Chris Maitland’s quick cymbol work lets you know this song will soon take a different direction.  Then, you get to the vigorous first chorus (“Green and cream, selective and pure…”), Lori’s quicksilver guitar solo, and finally the compelling second chorus (“Pull me out of the dark…”), and perhaps you’ll find yourself as smitted as I am with that tune.

Lyrics: The lyrics on this album are also different from most lyrical content on any Ayreon album.  They don’t turn each song into a chapter of a story.  Rather, the lyrics are more abstract and cryptic, and focus on themes such as guilt, regret, and depression.  And despite this being Lori Linstruth’s first crack at writing lyrics, they’re pretty darn good.  She uses lots of emotion and imagery, making it easy for the listener to relate to each song.

Vocals: Arjen struck gold her with his choice of a single male vocalist.  Jasper Steverlink has great range, nailing the soft and powerful parts with ease.  His interpretation of Lori’s lyrics is very earnest without over-singing on any track.  I can’t say he doesn’t better on any particular track, but that he’s consistent throughtout the album.  That’s a big plus.

Oh, and there are some catchy melodies on some songs.  That was one of the highlights of the last Ayreon album “01011001,” and “On This Perfect Day” has some solid ones, too.  I’ve found myself humming lines from at least half of the songs, particularly “Twisted Coil” and “Green and Cream.”

Weaknesses: None, to be honest.  Each song is strong and solid in every way.  If I had to pick one song that I don’t care for as much as the others, I’d say “Leland Street.”  It’s not as interesting as the other songs, IMO.

Overall Rating: 4.5 / 5 One of my favorite albums this year.  If you like complex rock/metal music, or a fan of Arjen Lucassen’s other projects, I highly recommend you getting this album.

Now, I had a little bit of fun with the album lyrics.  Here is a cool Wordle image with the most frequently used words in the lyrics for “On a Perfect Day,” with colors that are fairly close to the album art’s color palette. 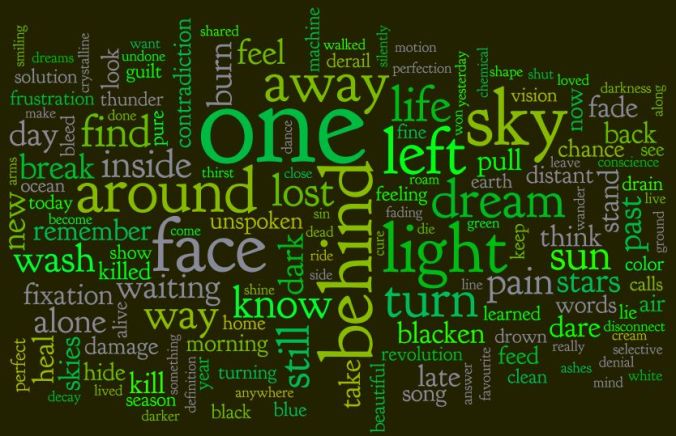 One thought on “On Repeat: Guilt Machine – “On This Perfect Day””