Introducing a new “segment” to my website: Recent Reads!  Whenever I finish reading a book, I’ll post a short review of it here on my website.  So, without further ado, here’s the book I finished a couple weeks ago…

“The Weight of Silence” by Heather Gudenkauf 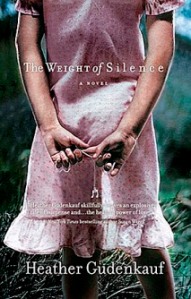 Genre: Contemporary fiction, with hints of romance and suspense

I found this book randomly at Borders back in August.  My friend and I were just browsing through the paperbacks at the New Releases table, and suddenly this cover caught my eye.  Maybe it was the girl’s pink dress against the dark forest background, or the delicate way she holds the bracelet behind her back… Either way, it captivated me enough that I picked it up, read the back cover summary, and decided right there and then to buy it.   Needless to say, I wasn’t disappointed.

“The Weight of Silence” tells of one pivotal and frightening day in the lives of the Clark and Gregory families.  The parents wake up to find their seven-year-old daughters – Callie Clark and Petra Gregory – missing.  It isn’t long before the search and police investigation reveals long-kept family secrets and the monster that lies dormant inside oneself.

Subplots weave in and out of “The Weight of Silence.”  All of them are relevant to the search for the missing girls and then, to the reader’s satisfaction, tied up tightly by the novel’s end.  Each subplot (and each angle of the search/investigation) is narrated by one of the following characters:

This book is Heather Gudenkauf’s first – and she does an exceptional job as a storyteller and as a writer.  She does what most good writers should do: Show, not tell.  I easily understood what each narrating character feels without being told the obvious (e.g., “I was angry”, “I was sad” ).  That’s always important.  Also, despite the narration switches from one character to another, I was able to follow the events and even sense when certain scenes were playing out simultaneously in the story’s timeline.  This also adds to the story’s suspense – a key ingredient in a search-and-rescue kind of story like “The Weight of Silence.”

I was also impressed with Gudenkauf’s depiction of Antonia’s struggle to leave her husband.  I could sense why Antonia was attracted to Griff in the first place; and as other flashbacks occurred, I could also sense her denial of Griff’s problems.  Even as his drinking spells went off and on again and he began to take his rage out on his own children, Antonia never stops thinking that things will improve.  That, someday, her husband will be sober and her family will be happy and (close to) perfect again.  Antonia feeds all these thoughts and more in the chapters she narrates, and… It’s sad and alarming to hear someone this deep in denial.  But anyone who knows someone who has been in Antonia’s shoes knows this can be all too true.

The only (minor) complaint I have about “The Weight of Silence” is Gudenkauf’s tone when she writes her third-person narration for Calli.  Sometimes I felt that someone older than Calli was “speaking” for her, that her thoughts were a bit wiser than what a seven-year-old would normally think.  Maybe that’s not such an issue.  After all, Calli has experienced more pain and tragedy than most girls her age do, but it still strikes me as a little odd.  There are some Calli moments, however, that perfectly age appropriate and beautifully expressed.  My personal favorite is the scene in the forest with the young dear.  (You’ll have to read it to know more!  😉 )

I had a very hard time putting this book down – and judging from past reads, that’s a great problem to have.  I found myself sitting so close to the edge of my seat at times, I probably would’ve fallen over if I wasn’t careful!  And “The Weight of Silence” doesn’t just pack an emotional punch.  In fact, it reaches in and pulls at your heartstrings – sometimes gently, other times like an iron grip – so that the characters’ feelings become yours.  I think I can still feel mine trembling… Just another way of knowing that “The Weight of Silence” won’t be a book I’ll soon forget.

Click here to learn more about Heather Gudenkauf and where you can buy “The Weight of Silence.”

One thought on “Recent Reads: “The Weight of Silence” – Heather Gudenkauf”